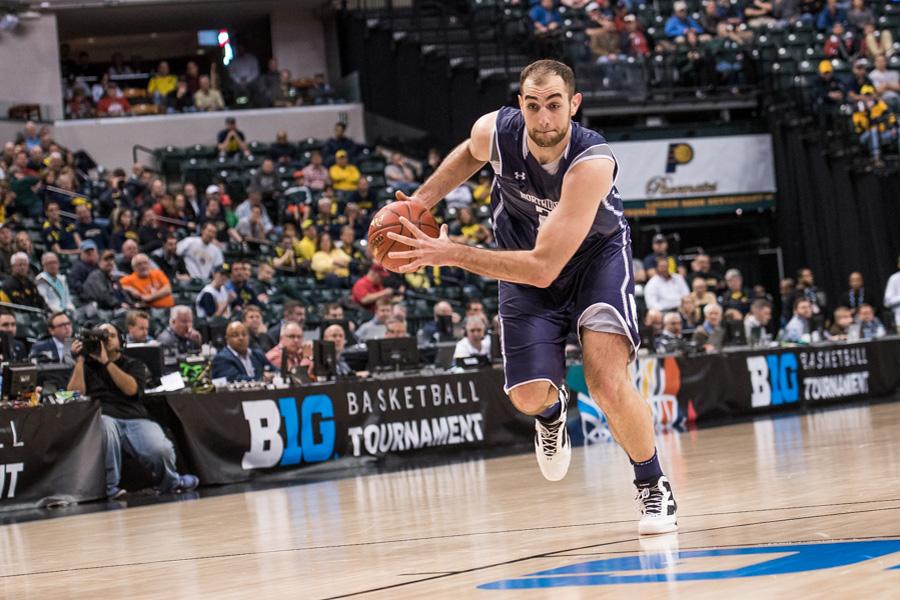 Alex Olah drives down the court. The former NU player and his teammate Tre Demps will be playing together professionally for Belfius Mons-Hainaut in Belgium. (Daily file photo by Sam Schumacher)

Alex Olah drives down the court. The former NU player and his teammate Tre Demps will be playing together professionally for Belfius Mons-Hainaut in Belgium.

Alex Olah slid backward with all four limbs pointed toward the ceiling and both fists clenched in celebration.

He slid all the way past the half-court logo inside Bankers Life Fieldhouse in Indianapolis. As he slid, his face bore a look of calm satisfaction. While his teammates went crazy, Olah was cool and composed. What he had just done hadn’t surprised him.

A few minutes earlier, Northwestern was in real trouble. With only 28 seconds remaining in their first round matchup against Michigan in the 2016 Big Ten Tournament, the Wildcats trailed by 4 points and needed a big shot. Olah set a screen for sophomore guard Bryant McIntosh and rolled to the corner, where McIntosh found him with a perfect pass. The seven-footer, a career 27 percent shooter from beyond the arc, caught the ball, stepped into his shot and confidently drained a triple to pull NU within a point.

Then, after Michigan made one of two free throws, Olah grabbed a Tre Demps missed jumper and, while falling backward, made the shot just before the final buzzer, sending the game to overtime.

It had been an inspired performance throughout the entire second half by the senior center, who scored 16 of his 20 points and grabbed 10 of his 13 rebounds in the period in an attempt to prolong his college career.

Although the Cats would go on to lose in overtime, coach Chris Collins said he is incredibly proud of how Olah refused to lie down in his final game.

“It was really cool as a coach to watch that and see, ‘Man, look how far he’s come,’” Collins said.

Olah was born in Timisoara, Romania, roughly 5,000 miles away from Welsh-Ryan Arena. As many European children do, he grew up playing soccer. However, he never developed the love for the game that many of his peers did. He said he tried other sports like tennis, volleyball and handball, but none of those fit him either.

It took until eighth grade for Olah to discover the sport he loves, beginning when he would casually “mess around” on the basketball court behind his school. But after a while, an adult at his school saw Olah playing and suggested he join the high school team, as he was already much taller than his classmates.

Instant success at the high school level led to an offer to join his local club team. When he dominated that level too, Olah wound up playing for Romania’s under-16 team in the 2009 European Championship, where he posted averages of 10.9 points, 7.6 rebounds, and 2.6 blocks in eight games.

Olah said his size and talent caught the eye of Ivan Vujic, a former NU assistant coach and international recruiter under Bill Carmody. The Wildcats offered him a scholarship, giving Olah an opportunity to continue his basketball career in the United States. He would have to leave behind everything he had ever known and travel to a faraway country with little idea what to expect, but Olah said the decision was an easy one.

The first time Olah walked into the gym inside Traders Point Christian Academy in Zionsville, Indiana, it was to watch his host sister play in a volleyball tournament. Olah had met his host family only a few hours earlier.

As soon as he stepped in the building, Olah became the center of attention. Whole families stopped and stared at the giant teenager who looked quite unusual in a small private high school.

Olah said a cheerleader went up to him and asked how tall he was, but he forgot the U.S. doesn’t use the metric system.

“I just started saying, ‘Oh, I’m 2 meters and 10 centimeters,’” Olah said. “She was like ‘what?’ and I’m thinking ‘Oh my gosh, I totally forgot I’m in a different country.’ That’s when it hit me. I went to the bathroom and splashed my face, that was the moment I realized everything was different.”

Although he didn’t know it then, Olah would be spending a lot more time in that gym over the next few years. When he first got to the U.S., Olah thought at 16, he was going to start playing for NU right away.

But before he could suit up for the Cats, Olah had to finish high school. At Traders Point, his graduating class was just 12 students. The basketball team had to use seventh and eighth graders to fill the roster, but that didn’t stop Olah from leading it to new heights.

As a junior, Olah led Traders Point to its first Indiana Christian Schools state championship in school history. Then as a senior, he averaged 18.5 points, 13.1 rebounds and 4.6 blocks per game and won a second consecutive title.

After two successful years, he headed to Evanston.

In college, Olah experienced adversity for the first time in his basketball career.

He started 29 games as a freshman under Carmody, but the talent level in the Big Ten was a big change from anything he had previously faced.

“It’s hard as a freshman who did not know anything about college basketball to come in and go against guys like (future top-5 NBA Draft picks) Alex Len and Cody Zeller,” Olah said. “It was a learning curve.”

Throughout his brief basketball career, Olah had generally been bigger and better than much of his competition. That wasn’t the case in year one at NU, and he said it led him to question his abilities as a player.

However, he used that as motivation to improve.

When Collins was hired as Carmody’s replacement at NU, Olah was the first player he met.

Collins was still coaching at Duke in the 2013 NCAA Tournament and was getting ready to face Michigan State in the Sweet 16 in Indianapolis. The two had been texting and Olah’s host family drove him from nearby Zionsville down to the hotel where his new coach was staying.

Olah and Collins spoke for more than an hour, and what the young center said during their first meeting stood out to the rookie head coach.

“The one thing that struck me when I first met him was him saying to me, ‘I really want to be a good player,’” Collins said. “He told me, ‘I want you and your staff to work with me and believe in me, and I’ll do anything it takes because I really want this.’”

Collins said his first step was to get Olah’s confidence back. The struggles from his freshman year had taken a toll.

To get his center to believe in himself again, Collins said he needed to remind him about who he was. That first offseason, every time he saw Olah in person, Collins made him look him in the eyes and tell him he was a beast.

“He was having fun with it, and he started adding some choice adjectives to the beast, a choice f-word before the beast,” Collins said. “That’s when I knew that he was really getting it.”

What started as a lighthearted motivational tactic turned into a t-shirt and a nickname that Olah fully embraced, and eventually elevated his play on the court.

Olah boosted his numbers to 9.1 points and 5.2 rebounds per game as a sophomore, more than doubled his block total and improved his field goal and free throw marks by almost 10 percentage points each.

As a junior, he took the next step and was named as an All-Big Ten Honorable Mention by the media after averaging 11.7 points and 6.9 rebounds per game. He also became NU’s all time leader in blocks in late February.

“I thought I had a chance to be one of the best centers in the Big Ten, and I went in every season and every offseason with that mindset,” Olah said.

In his senior season, everything came full circle for Olah.

He continued his production from the previous year both before and after an injury caused him to miss some time mid-season, and was an integral part of getting the Cats to a program-record 20 wins.

He developed into a leader for the younger guys in the locker room, especially freshman center Dererk Pardon.

“He was like a mentor to me, a big brother,” Pardon said. “He taught me a lot of things I couldn’t learn from the coaches … he took me under his wing and helped me out a lot.”

Both Collins and Pardon reflected on Olah’s role as the emotional leader of the team, with Pardon recalling Olah giving numerous pump-up rants in his Romanian accent during practices.

As a person and a player, his growth was complete, Collins said.

“The thing that I loved was seeing that growth, that confidence, that kind of swagger, where by the time we got to this year, seeing him walk with his head held high, seeing how well-loved he was, and seeing how proud he was of himself,” Collins said.

But something was missing — his parents had still never seen him play at NU.

Collins and Olah had been working for a year to sort out the flights, paperwork and schedules, and their efforts paid off at the end of his senior season.

On March 4, 2016, Olah’s family arrived in the U.S. for the first time, much like Olah himself had done nearly five and a half years prior. A few days later, they were in the Welsh-Ryan Arena stands to watch him lead the Cats to a victory over Nebraska on Senior Day.

“To see them be able to come out on his Senior Night and get that ovation, and have them walk hand in hand with his host family, kind of put it all into perspective of what this place has meant to him, to see his emotions,” Collins said. “There’s no one I’ve coached that loves this place any more than Alex.”

Alex Olah slid across the court.

Everything had built up to that moment in the 2016 Big Ten Tournament. He had transformed from a timid freshman to a senior confident enough to take, and make, two clutch shots late in a postseason game.

Looking back, Olah said there’s nothing he would’ve done differently. Looking forward, he’s not giving up on his dream of playing in the NBA.

Olah and his agent have found a few NBA workouts, and he plans on trying to play in the Summer League with the hopes that a team will give him a shot. If not, he’ll head back across the ocean and play professionally in Europe.

Olah said Collins has told him he could be an excellent coach someday, too.

“You never know, in 10 years you might be seeing me here on campus again,” Olah said with a grin.