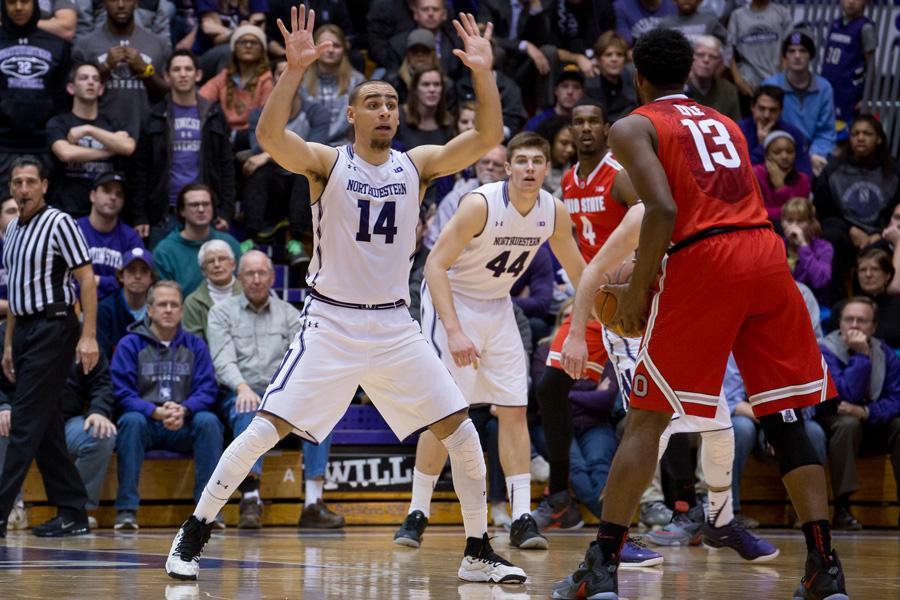 As a junior in high school, Demps found himself in the Chicago area alongside his father, NBA executive Dell Demps, who was at the NBA Combine. After playing pickup at DePaul, Demps visited Evanston where he was introduced to NU’s basketball program — then helmed by coach Bill Carmody.

Naturally, he also learned about the team’s infamous reputation as the only power conference school to never compete in the NCAA Tournament. But rather than be turned off by the team’s unimpressive track record, Demps saw an opportunity.

“You wanted to be a part of history,” he said. “Be a part of something special.”

That decision set the tone for his career — a career distinguished by hard work and unrealized payoffs. From the start, Demps was not only willing, but eager to put the program first. And for a program that soon found itself in flux, there was perhaps no better player to spearhead such an effort.

Demps found himself on NU’s radar following his visit. NU gave him an offer after his first AAU game of the NCAA’s live recruiting period. He accepted a month later.

Still, despite the immediate initial attraction, Demps ran into his fair share of growing pains in his first few weeks at NU. After a high school career spent in the limelight, balancing personal expectations with the reality of being a smaller fish was jarring, he said. However, an early-season injury forced him into a redshirt and offered Demps a new vantage point.

“I had to take a step back and realize that the program and everything about Northwestern was bigger than myself,” he said.

Even after coming to terms with his new role, Demps’ career began with a few speed bumps. The guard said that he and Carmody failed to establish an early rapport, which was difficult on both parties.

“I think just in life and in basketball, certain people jell together and certain people don’t,” Demps said. “Just based on personalities and just based on the chemistry and vibe of different people — and it doesn’t make either person a bad person — but there just wasn’t ever really a connection there between coach Carmody and I.”

For the young guard with lofty aspirations, the coaching change — and ensuing culture change — fit right in with Demps’ personal approach to the game and helped point the program in the direction that Demps envisioned it going from the start.

In his first year, Collins found himself overwhelmed with work. With everything from hiring a staff to recruiting on his plate, the Cats’ new coach was in his office “morning, noon and night” — working as much as 20 hours a day.

But he wasn’t alone. Collins’ office is situated above a practice court at Welsh-Ryan Arena and as he worked through the transition, he was often accompanied by the sound of a bouncing ball.

“I would peek in, like ‘Who is that?’ It was always Tre,” the coach said. “I wanted a team full of those guys.”

Demps’ reputation as a gym rat accompanied him through high school and under Carmody. But in the Collins era, with strict training regimens introduced and a greater emphasis placed on hard work, Demps said his purpose at NU began to make sense.

“Coach told me that year that my role was to be a key guy,” Demps said. “When I heard that, it was really exciting. I really wanted to do everything I could to make that possible.”

He and Collins immediately clicked. Their shared hunger “to get this program to a new level” served as the foundation of their relationship, Demps said. That Collins quickly understood and appreciated his player’s introverted ways helped the friendship flourish further.

However, Collins also understood that Demps would need to accept a role as a leader in order to transform the culture into what they both wanted.

“Leadership was always a tough thing for me personally,” Demps said. “But coach just always told me to … lay the foundational example day in and day out. You know, working as hard as I could and that the younger guys would just follow suit.”

The star point guard entered NU with a similar undying passion, but even he was taken back by how hard his teammate worked. Immediately, he felt pressure to elevate his own work ethic.

“(Demps) pushed everyone else,” McIntosh said. “Coach Collins would say, ‘He’s working, are you?’ It was a follow-the-leader kind of a thing and he was the guy that started it all, and then I followed suit when he took me under his wing and then everybody else just did the same.”

The two began working together in the weight room and in the gym, pushing each other and looking to collectively help the team grow.

Eventually, it evolved into a competition to see who could beat the other to the floor, McIntosh said.

It wasn’t just the two guards, though. As more and more younger players looked up to Demps’ example, the culture evolved accordingly. Soon, Collins’ goal of having a team of workers in the mold of his veteran guard was realized.

“It’s crazy to see seven, eight guys in the gym working on their game,” Demps said. “A long time ago it was just me.”

Now, after his third season, with the Cats seemingly on the verge of transforming into a bubble team, Collins is quick to credit his team’s growth to the changes in culture — changes, he says, Demps helped to spark.

After a historic run through nonconference play, the team as a whole had returned to earth. The month of January was largely characterized by missed opportunities and blowout losses — save for a rout of Minnesota and a narrow win over Wisconsin.

Through it all, Demps was in a slump. In five separate outings, the senior failed to eclipse 30 percent from the floor and, on the month, went just 14-of-64 from long range.

After falling 85-71 to Iowa — the team’s fifth-straight loss and one that was far more lopsided than the 14-point margin suggests — Demps’ emotions boiled over in a film session.

“A lot of times your greatest strength can be your greatest weakness,” Collins said. “And Tre cares so much. And he takes a lot on his plate. … Eventually, that can overflow and be a negative because you don’t relax. And then you play always a little bit too frantic because you want it so badly.”

Demps’ breakdown caught the team off guard, but perhaps even more shocking — at least in the eyes of the senior guard — was the response he received.

“Just seeing how the guys just supported me and loved me after that moment just speaks volumes about them,” Demps said. “From there I really realized I had brothers who were for me.”

For a player who often struggled to put feelings into words, the moment gave him the opportunity to connect with his teammates, albeit in an unconventional manner. Collins said Demps was able to share the pressures he felt and open up to his team in a manner he struggled to do prior.

Afterward, the team began to play better basketball, winning crucial games down the stretch to earn a bye in the Big Ten Tournament and played Michigan nearly even in an overtime thriller in the tournament.

“He was more open with us, he was more honest about what he was going through — some of his struggles and some of his worries,” McIntosh said. “It made us closer as a team and we started winning because of that.”

Demps, too, began playing some of the best basketball of his career. His efficiency improved, as did his confidence.

And although the team ultimately fell short of acquiring the coveted NCAA Tournament bid, the year as a whole proved to be another step forward for the growing squad.

“To see that level of play, to see where we’re at and to see what we’re on the verge of doing,” Collins said. “We’re not there if not for Tre Demps.”

“When nothing seems to help, I go and look at a stonecutter hammering away at his rock perhaps a hundred times without as much as a crack showing in it. Yet at the hundred and first blow it will split in two, and I know it was not that blow that did it, but all that had gone before.” – Jacob Riis, The Stonecutter Credo

When Collins joined the fray, he brought with him the Stonecutter Credo, an adage first adopted by the NBA’s San Antonio Spurs to stress the importance of perseverance and incremental progress.

Today, the credo — often seen condensed in the team’s pervasive “Pound the Rock” branding — can be found in the Cats’ locker room, as can a purple stone for the players to pound to remind them of that ultimate goal.

Despite joining NU with the intention of helping the team make history, Demps won’t be a part of the roster that eventually sees the boulder break. However, the guard departs satisfied knowing that the program is in better shape than when he joined.

“Just to see the respectability that this program has now is a great honor and something that I wouldn’t trade for anything,” Demps said. “Not a lot of people would stick by and continue to go through the growing pains so that recruits two, three years from now can go into a program that’s already established. It’s honoring to be the dirty work person and do things from the bottom up and now see the program in a place where it’s definitely starting to reach its peak.”

Demps is ready to move on; after five years in Evanston, he knows it’s time to take the next step.

What that next step is remains unclear. In the short term, Demps has his sights on a summer camp invite from an NBA franchise. From there, he’ll look to get a partial deal with a professional team, either in the NBA or abroad.

He’ll face a similar uphill battle as he did as an underappreciated recruit, but that chip on his shoulder and his unparalleled drive bode well for his ability to find success, his teammates and coach say.

“I know he’s going to be successful,” Collins said. “He’s not afraid to go through that journey.”

But even as he moves on, Demps said he will remain invested in NU basketball. Though his name may not appear on the roster, he knows he’s still a part of the brotherhood, and that he played a role in shaping the program’s future.

And according to his grateful coach, Demps’ lasting legacy won’t be soon forgotten if and when the team eventually takes the next step.

“I want (Tre and fellow senior Alex Olah) to feel amazing joy when they see us get to the mountaintop,” Collins said. “Because it doesn’t happen without those two guys.”

Demps knows there’s still work to do before NU’s rock finally cracks. But he’s confident the program’s moment isn’t too far off in the distance.

And when it finally comes, it’ll be a moment he’ll cherish as much as anyone.

“I feel like I’ve hit that rock a lot of times,” he said. “And I know when it breaks, a couple of my pounds will have done something.”