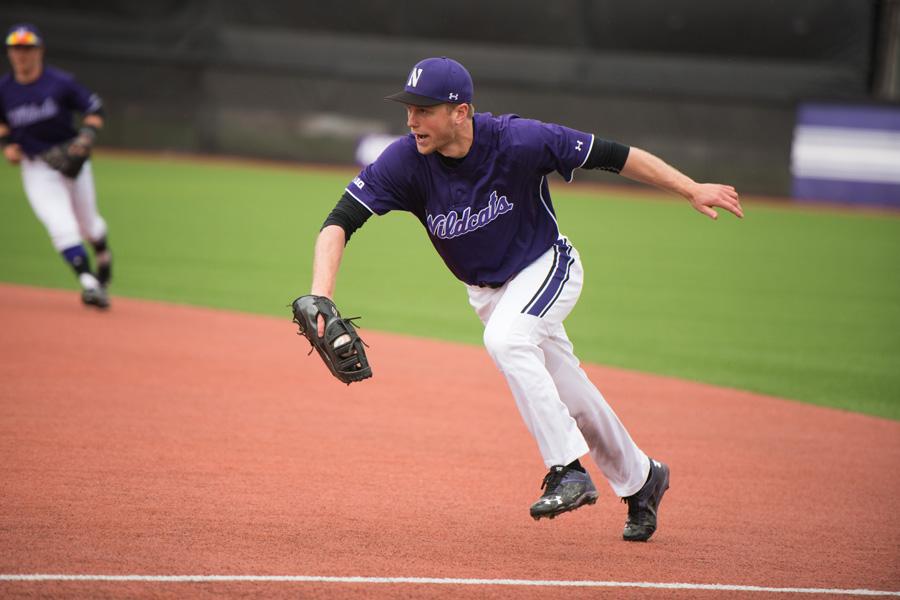 In the spring of 2013, Zach Jones entered his first season of collegiate baseball unsure of how much playing time he would get. Two months later, he was stepping up to the plate under the lights of legendary Wrigley Field.

With the bases loaded in the eighth inning and Jones in as a pinch hitter, the freshman out of local Glenbrook South High School and avid Chicago Cubs fan earned a walk to score Northwestern’s fourth run in a 6-0 shutout of rival Michigan.

In that moment, he knew he’d made it as a baseball player.

“I still remember when I heard that we were going to go play there, I was just like, ‘Oh my god’ … I didn’t even know how to react, I was so excited,” Jones said. “That was an unbelievable experience. I still can’t really believe it.”

On Saturday, Jones played the final game of his Wildcat career, ending his tenure with 209 hits. NU’s longtime staple at first base and the No. 2 spot in the batting order is just a month away from graduation and may be done with competitive baseball forever — he’s unsure what his post-college plans are.

He’s seen several major changes over the past year: a massively upgraded home stadium and clubhouse at Miller Park, the end of Paul Stevens’ 28-year tenure as head coach and the beginning of the Spencer Allen era. In the wake of all that change, Jones has been left as something of a relic of the old days of the program, a bridge over a time period of great transition for NU baseball.

Jones and that bygone era of the program became wedded in 2011 when Stevens and then-assistant coach Jon Mikrut scouted the local high school junior hitting at an incredible .469 rate.

After following it up with a .463 average his senior year of high school, Jones migrated the short distance to Evanston, where he immediately became a regular starter and ranked fourth on the team with a .300 batting average as a freshman.

That impressive first campaign set forth a standard of reliability that Jones maintained throughout his career with the Cats.

Despite Jones’ own efforts toward the cause, however, he was never able to experience change in one critical aspect: the team’s lack of success.

NU’s 22 wins during Jones’ freshman season proved the most he would ever see. The retirement of Stevens and departure of Mikrut last summer, and the introduction of the new Allen-led coaching staff to replace them, signaled a rebuilding year in 2016 — especially with a roster featuring only four true seniors. After winning four of their first eight contests, the season did indeed go south, as the Cats’ abysmal 15-39 mark will go down as one of the worst in program history.

Nevertheless, Allen extensively praised the impact of Jones — whom he dubbed “Steady Eddie” — and the few other seniors for keeping the team’s morale stable during the season of tremendous turbulence on and off the diamond.

“You can work hard and do all the right things and we may still be 13 and whatever we are. That’s not about what it was about,” Allen said. “They were good humans, good guys, and hopefully when we get this thing rolling and turned around, they can come back and know that they had a part in that.”

Jones said he’s tried to use his seniority to help teach the team’s many underclassmen.

“One (lesson) that took me a while to learn is just the mindset you’ve got to have,” Jones said. “Everyday is a new day and you’ve just got to go up there and stay positive. Obviously things are going to be tough sometimes, but you’ve got to fight back because you’ll never know when it could turn around.”

But in the 8th inning on May 7 against Purdue, Jones ripped a double to center field to join a select group of players in NU history with 200 career hits to their name. He called it the accomplishment of which he’ll forever be most proud.

The following weekend, Jones was honored during Senior Day festivities before the opening game of his final home series. The Cats were then walloped by Cal, 16-0, to spoil the commemorative day.

In three years, he had gone from defeating rival Michigan in front of more than 4,000 at Wrigley Field to losing by double-digits in front of 492 at Miller Park. The difference in setting was stark — but the journey, Jones said, had made it all worth it.