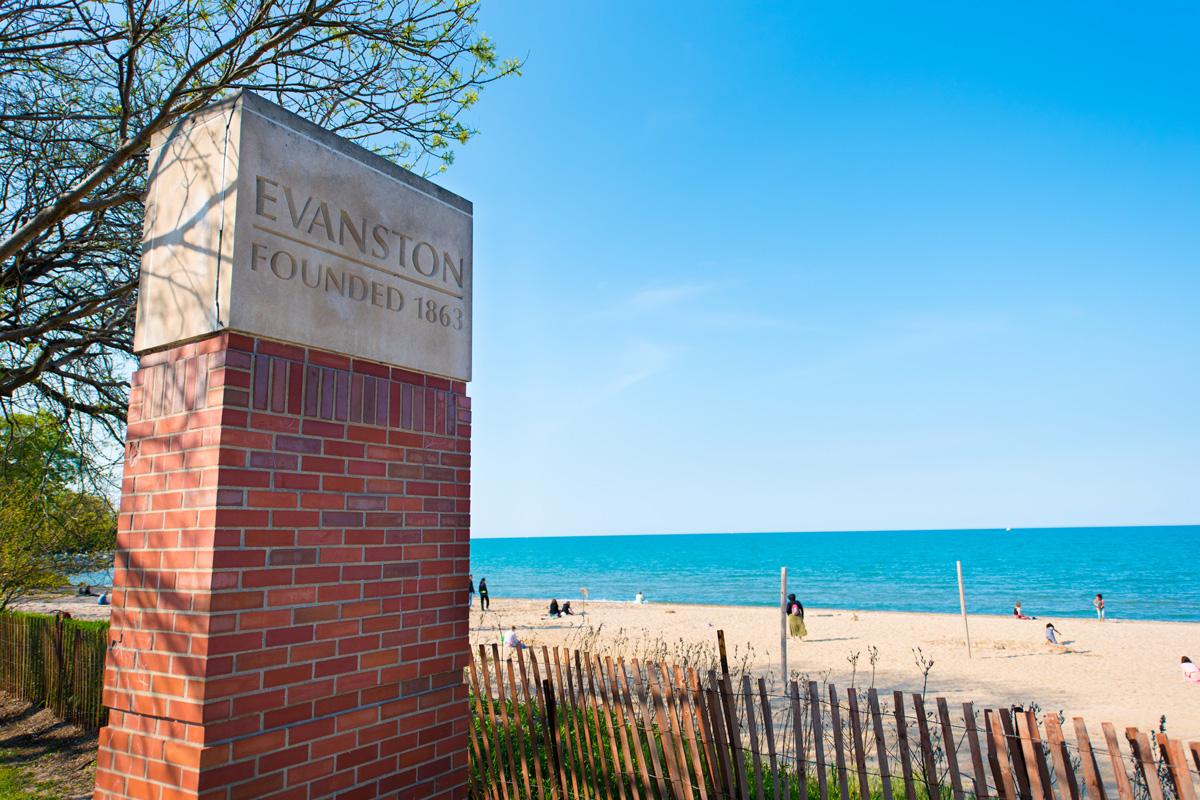 A sign overlooking Lake Michigan marks the entrance to Evanston in the 3rd Ward. The ward is close to Chicago’s Rogers Park neighborhood and allows residents to commute quickly to Chicago via its Main Street Metra and CTA stations. (Daniel Tian/Daily Senior Staffer)

A sign overlooking Lake Michigan marks the entrance to Evanston in the 3rd Ward. The ward is close to Chicago’s Rogers Park neighborhood and allows residents to commute quickly to Chicago via its Main Street Metra and CTA stations.

On May 17, 1970, prompted by the student strikes and shooting at Kent State University earlier that month, residents of the 1100 and 1200 blocks of Hinman Avenue, situated in the 3rd Ward, declared independence from the United States for two hours as a protest against the Vietnam War.

The 3rd Ward, bordered by Dempster and Lake Streets to the north, Calvary Cemetery to the south and Lake Michigan and two sets of train tracks to the east and west, has a more metropolitan feel than other wards, which some residents attribute to its collection of small businesses and easy access to transit.

The ward hosts two of Evanston’s major commercial districts, on Main Street and Dempster Street, and a long history of political activism — even before the Vietnam War protest, residents of the 3rd and 1st wards concerned about zoning, land use and historical and environmental preservation banded together to form the Southeast Evanston Association, a group still active in the area.

The 3rd Ward borders a portion of Evanston’s beachfront — an asset some residents outside the ward find difficult to access. But Wynne emphasized the public nature of Lee Street and South Boulevard beaches, which are included in her ward.

“So much of why people live here is that access to the lake all year round,” Wynne said. “Those are such treasures because they’re the communal place where everyone goes and hangs out.”

The ward tempers its urban feeling and plentiful businesses with a community feeling, striking a balance between city and suburb, said David Lipschutz, owner of Blind Faith Cafe, 525 Dempster St., and a longtime 3rd Ward resident.

“It’s a nice place to live, to play, to eat, to hear music,” he said. “It’s not suburbia, not strip malls and developments, but it’s not the city either.”

Historically, Evanston’s growth came from the train lines, which connected the city to downtown Chicago. The Metra and CTA stations at Main Street continue to be a source of growth and access for the 3rd Ward, with residents commuting into Chicago for work and Chicago residents visiting the ward for its many small businesses.

“Over the years, the two train lines have really shaped who lives in the 3rd Ward,” Wynne said. “The idea that you need a car for everything you do, that’s never been the case here.” 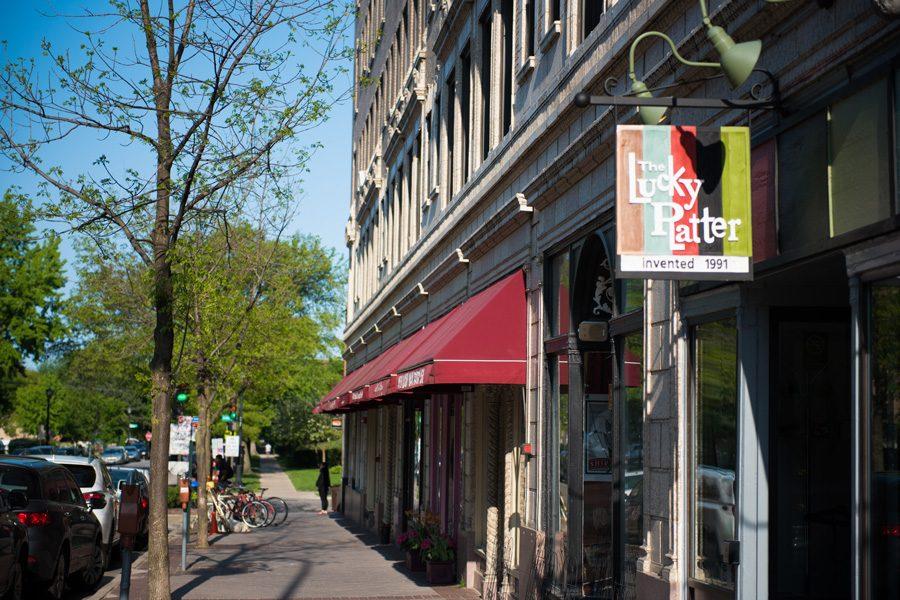 Wynne, a resident of one of the Hinman blocks that seceded in 1970, was one of those commuting residents — she used to travel to her job at a law firm in Chicago’s then-Sears Tower from her home.

The 3rd Ward is also near Rogers Park, a Chicago neighborhood bordering Evanston. Resident Sarah Laing, a 32-year-old artist said she likes living close to the restaurants, shops and other businesses in Rogers Park.

“To me, it’s the most urban area in Evanston,” said Laing, who finds it reminiscent of the Chicago neighborhoods where she spent a lot of time during her childhood. “You can walk to anything you need in our ward — the school, the grocery stores, restaurants.”

The Metra and CTA trains draw people into the ward from Chicago, as well. Amy Wilkinson, a resident of the 9th Ward and taproom manager at the recently opened Sketchbook Brewing Co. Tap Room, 821 Chicago Ave., in the 3rd Ward, said she’s seen a lot of Chicago residents come in for a beer since Sketchbook expanded from its alley location to a taproom across the street from the Main Street stations last month.

“We’ve seen that become a more of a factor over the past month,” Wilkinson said. “Before, when we were selling beer to take home out of our location in the alley, it was more local residents, but now we do see more people coming up from Chicago.”

Sketchbook is just one of many small businesses in the 3rd Ward. Restaurants like Oceanique and Lucky Platter sit alongside Brothers K Coffeehouse, which Laing said hosts many neighborhood meetings, on Main Street. The internationally-distributed Few Spirits, started in 2011 by Paul Hletko, a parent at Lincoln Elementary School in the 3rd Ward, is tucked in an alley off Chicago Avenue.

Hletko, a resident of the 9th Ward, said the 3rd Ward was the perfect spot to start the craft distillery — even if it meant overcoming 160 years of Prohibition tradition and laws to create the first alcohol produced in Evanston.

“We decided we’ve got to keep it here, got to give back to the community,” Hletko said. “The city was a fantastic partner — we were the beneficiary of a lot of support from Alderman Wynne.”

One way small businesses such as Few give back to the community is through fundraisers and donations to the Lincoln Elementary School auction, Laing said.

Though Few Spirits and Sketchbook are fairly new, others, such as Blind Faith Cafe, have been staples in the 3rd Ward for decades.

“When you think about the neighborhood you grew up in, there are probably a few places you think of as the backdrop to your life,” said Lipschutz, who began working at Blind Faith shortly after it opened in 1979 and assumed ownership a few years later. “For many people, the Blind Faith Cafe has been that. I had people who came in here, they met, they dated, they had kids, their kids worked here, they went off to school, got married, had kids and brought their kids here.”

Lipschutz said while Blind Faith has remained a constant in the community, he’s seen significant changes to the area around the restaurant over the past 30 years.

The Dempster business district, home to Blind Faith, and the commercial district at Main, where Sketchbook is located, are now unified along the corridor of Chicago Avenue that connects them as a “special service area” called the Main-Dempster Mile. The special service designation attaches a levy to property taxes within the area to support services such as additional landscaping, advertising and garbage collections to make it more welcoming to consumers.

Residents of the 3rd Ward said their community faces many of the same issues shared by the rest of Evanston and other cities nationwide — rising property costs, taxes, crowded schools and, in light of Illinois’ nearly year-long budget stalemate, lack of state funding.

In addition, the thriving small businesses that characterize the 3rd Ward bring a slow but steady progress of economic development, Laing said, but also raise concerns about gentrification pricing people out of the ward.

“We keep wondering if the 3rd Ward is going to get more expensive as these businesses keep moving in,” Laing said.

Wynne, too, said she’s heard concerns about rising costs in some blocks of the 3rd Ward, as well as some uneasiness about commercial development around Chicago Avenue making changes to the density and character of the ward.

A new building under construction at the intersection of Chicago Avenue and Main Street, 835 Chicago Ave., has been the focus of some of these comments, Wynne said. The building, currently under constructed in a lot that was empty for years after the 2008 recession, will have retail space on the bottom floor, a floor of office buildings and apartments when it’s slated to open this fall.

Wynne said residents had been accustomed to using the empty lot and are worried about a new building altering the dynamic of that section of the ward.

“Because (the lot) was vacant for nine years, people got very used to having that large open grassy lot for their dogs and their kids to play on it,” Wynne said. “I know some people don’t like how it looks, but that’s true for every building we build — people are going to like it and people are going to hate it, and people don’t like that it’s change.”

Lipschutz and his wife, Laurie Calhoun, noted Evanston’s high property taxes as a major issue for residents, one that pushes some 3rd Ward natives to look for housing elsewhere.

The 3rd Ward used to be more of an affordable stepping-stone for people to move into north Evanston or other North Shore neighborhoods, Wynne said, but after the market crash of 2008, many living in apartments or condominiums in the 3rd Ward stayed put. Since then, an interest in “new urbanism,” an urban design movement focused on creating cities with schools, workplaces, residences and shops in easy walking distance, has made the 3rd Ward very desirable, Wynne said.

With that desirability has come some pressure on the ward’s only public school, Lincoln Elementary School, 910 Forest Ave. Enrollment at Lincoln increased by 112 percent from 2008 to 2014, prompting worries from parents about overcrowding, large class sizes and stretched resources, Laing said.

“These are issues that you can see across the board, but I think that’s our greatest asset, too — we love that our kids get exposure to all sorts of real life issues,” Laing said.

Residents said the 3rd Ward has always engaged with these issues. From the Hinman Avenue protest to Lincoln’s International Family Festival, an annual cultural celebration at the school, the ward continues to bustle with new ideas.

“We’ve seen Evanston become much more commercially and economically diverse and secure,” Lipschutz said. “Despite all the changes in the skyline and economics, the community has maintained a certain progressive economic diversity.”