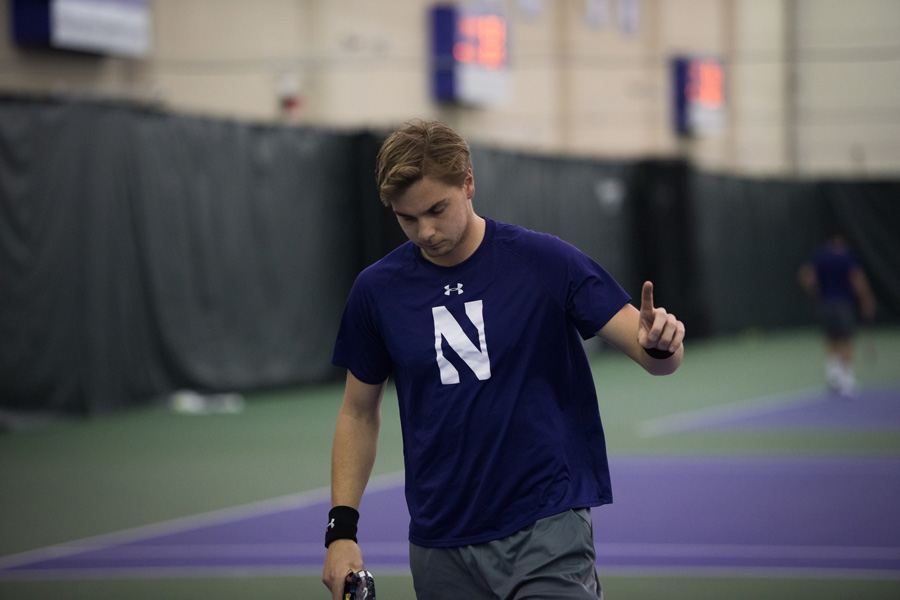 Curtain Call: From Norway to Northwestern, Fedor Baev is helping the Wildcats make history in his senior season

Senior Fedor Baev’s toughness was put to the test in a February 13 match against Kentucky. After having multiple opportunities to win the first set, he ultimately fell 14-12 to his opponent Enzo Wallart in a draining marathon tiebreaker. However, true to form, Baev did not lose his focus, managing to rally back and win the next two sets, including a tiebreaker in the third.

Regardless of what happens during this and potentially next weekend’s NCAA Tournament matches, the senior will leave Evanston having been a part of four 20-win seasons — including this season’s squad who has the best record in program history. The past four years are the first time that NU has won 20 matches each year. But Baev is not content with just the best record in program history.

“We’re not done yet,” Baev said. “There is a lot of time to improve on the season and hopefully set some more records.”

Unlike the highly competitive upbringings some players experience, Baev’s tennis career began more humbly at a club about 1,000 feet from his house in Oslo, Norway. Baev got his first taste of the game at the age of 5 with his father, but his interest ultimately took off at age 7 when he joined the tennis club.

Since college sports don’t exist to the same extent in Norway, Baev knew if he wanted to play competitively at the college level, he would have to go to school in the U.S. or else give up the sport he loved. In the fall of 2011 Baev chose to travel to Florida to compete in two large junior tournaments in order to generate interest from college coaches. Northwestern assistant coach Chris Klingemann noticed Baev at these tournaments and extended him an offer.

“I thought he was a very talented kid, he has a good body and was a big kid,” coach Arvid Swan said. “He had good weapons, a good serve and good forehand. For a junior, he had a lot of ways to win points.”

When Baev visited campus the next January, he fell in love with the tennis program and academic environment at NU — and accepted the offer almost immediately.

But at the beginning of his freshman year, Baev said he experienced stark differences between the tennis cultures in his hometown and at NU.

“Practice-wise it was much more intense,” Baev said. “Back home, in every aspect it was more laidback and the coaches wouldn’t get on your case.”

On-court differences were not the only changes Baev experienced. He had primarily only been taught in Norwegian and now he was 4,000 miles away from his home country. Baev encountered difficulties with the usual homesickness of leaving for college while also adjusting to living in a new country.

“Being away from all my friends and family, it was tough,” Baev said. “I guess I faced some adversity that first year. Now I don’t consider it adversity anymore; it’s just part of life.”

Baev’s coaches and teammates said they have been impressed with his growth on and off the court over the past four years.

Senior Mihir Kumar, the only other senior on the team, has witnessed Baev’s transformation ever since they met in a hotel at the start of their freshman year.

“He’s a great leader and he’s had a great career,” Kumar said. “He’s gotten stronger, he hits the ball harder, he’s more consistent now. We always joke his backhand is better now, freshman year it was a little shaky.”

Coaches and teammates attributed this growth to Baev’s disciplined practice habits. In contrast to his experience playing tennis at home, Baev said he always tries to hold himself accountable during practices and be a role model for others in the program.

Swan had high praise for Baev’s attitude outside of the team’s matches.

That unselfish attitude extends to Baev’s approach to doubles.

Early in his career, while Baev was not a fixture in the singles lineup, he was able to team up with now-junior Strong Kirchheimer to play in the doubles lineup. That pairing has lasted until the present day. Baev and Kirchheimer play No. 4 and No. 3 singles, respectively, but compete together at the No. 1 spot in doubles.

Kirchheimer said Baev’s composure on the court, compared to his own more emotional style, is part of what has allowed the pairing to be so successful over the past three years.

“We always joke that he keeps me in control when we play and I think to an extent that’s pretty true,” Kirchheimer said. “It helps playing with him because we have very contrasting games and it’s very helpful having someone who can do different things than me.”

With an 18-11 record this season, the duo sit tied for seventh all-time for wins in program history. In singles, Baev is 14-12 on the season.

Baev has an oft-aggressive style of play, focusing on using his powerful serve and forehand to open up opportunities to get to the net. Once there, Baev is able to use his 6-foot-3 frame and quick hands to efficiently finish off points.

“He’s got an all-court game and is really good at finishing at net,” Swan said. “His doubles is outstanding and his doubles has improved a great deal. The way in which he competes is unbelievable.”

Baev has tried to apply that same resilience off the court, where he is completing a degree in economics and has secured a job with a Chicago hedge fund after graduation.

But, before Baev steps off the court and into an office, he has one more chance to take his team to new heights.

“(This season has) definitely been the highlight of my tennis career and going out on that high note has been awesome,” Baev said. “Being able to share that experience with everyone on my team has been tremendous and has definitely been something that I’ll remember for the rest of my life.”