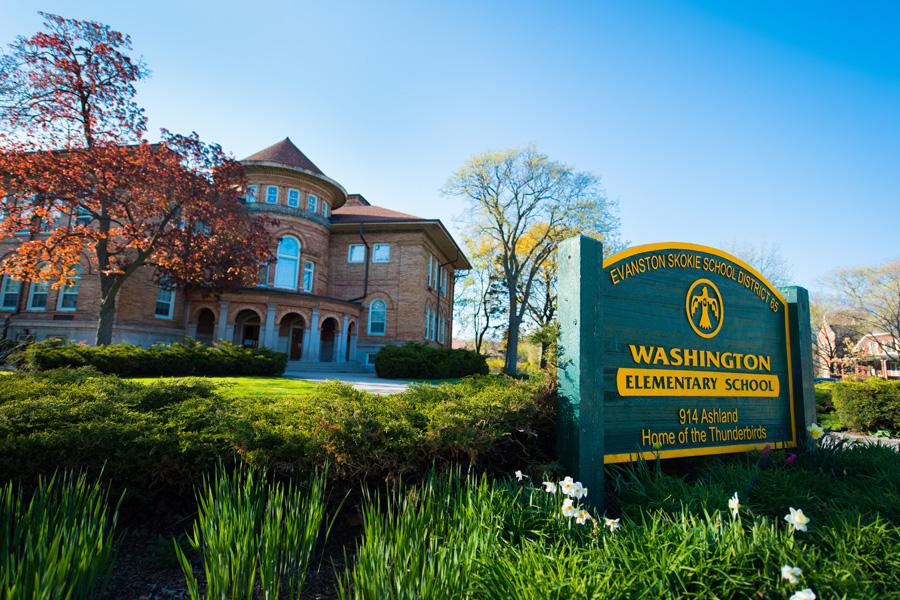 Washington Elementary School is located in the southwest corner of the 4th Ward. It serves children from a large chunk of the ward, as well as small areas in the neighboring 2nd and 9th Wards. (Daniel Tian/Daily Senior Staffer)

Washington Elementary School is located in the southwest corner of the 4th Ward. It serves children from a large chunk of the ward, as well as small areas in the neighboring 2nd and 9th Wards.

Evanston’s 4th Ward has a little bit of everything. A portion of downtown dips into its boundaries, the police and fire station headquarters are nestled just inside and three Evanston/Skokie School District 65 schools dot the ward.

The 4th Ward is located at Evanston’s center and is the only region encapsulated by other city wards on all sides. Residents and local officials say because of its central location, the ward is characterized by its socio-economic diversity, community gathering places and schools that facilitate learning beyond the classroom.

Ald. Donald Wilson (4th), who was elected to City Council in 2009, said his ward represents a “transitional spot” between areas of differing socio-economic status in the city.

“In Evanston, we pride ourselves on diversity of population,” Wilson said. “But historically you have the lakefront neighborhood houses — a lot of wealthy families there — and then you have more of the working class which was to the west side of the city. The 4th Ward kind of captures that transition area.”

In this way, residents say the 4th Ward represents a blending of Evanston’s cultures and communities. Karen Demorest, executive director of the Youth Job Center, which is located in the ward, said this socio-economic diversity makes the neighborhood one of the most welcoming in the city.

“(The wards) each have their own unique personalities and they all have some connection to the larger city,” said Demorest, who lives in Glenview, Illinois, but plans to move to Evanston in the future. “I would think most people across the city would feel not only welcome but that they have access to the 4th Ward.”

Resident and community leaders say this accessibility is exemplified by both the 4th Ward’s people and places — from friendly neighbors and small businesses to places of worship, recreation centers and schools.

A community of learning

Three schools are situated within the 4th Ward’s boundaries, including Dewey Elementary, Washington Elementary and Nichols Middle schools. But the kids who attend those schools may live beyond the 4th Ward, which Washington Principal Kate Ellison said exposes its students to peers with different lifestyles.

“We have such a range of economic diversity,” Ellison said. “The school really feels like it’s at the hub of the neighborhood in a lot of ways.”

Nearly 50 percent of Washington’s student body is eligible for free or reduced-price lunches, according to school statistics collected by the state from the 2014-15 school year. Ellison said the school serves students from a variety of socio-economic and ethnic backgrounds, as well as bilingual students. According to state statistics, Washington’s student population is slightly more than 25 percent English learners.

Jenni Suvari (Weinberg ‘93) has lived on Maple Avenue in the 4th Ward for 11 years and sent her three children to Washington for elementary school and Nichols for middle school. Suvari, who was involved with the Parent-Teacher Association at both Washington and Nichols, said the schools not only taught her twin sons and daughter the value of diversity but also engaged parents and the greater community with social and racial justice topics.

“I’ve been really impressed with how open people are, and willing to roll up their sleeves and attack issues that are often something that people don’t want to talk about,” she said. “There’s been a lot of talk about racial justice, social justice, in a diversity series that’s gone on at the schools.”

Longtime 4th Ward resident Calder said her three children had become more conscious of people’s differences through their education at Dewey and Nichols. In addition to each reaching large portions of the ward, all three schools serve a number of other districts.

Due to the wide reach of 4th Ward schools, both Calder and Suvari said their children had friends from throughout the city. Calder said her children gained “a real appreciation for diversity” in Evanston, and Suvari said her experience with Washington and Nichols provided a lens through which she viewed both the 4th Ward and city communities.

Although the schools connect families from different wards, the McGaw YMCA, located at 1000 Grove St. in the 4th Ward, is a “convener” of the city at large, said Monique Parsons, the YMCA’s chief operating officer.

“You have an organization like the YMCA that’s been rooted in this ward for over 130 years, and that’s profound,” she said. “Not only is it a YMCA in this ward, but it brings others from outside into this space to meet and exercise and develop strong relationship bonds.”

Parsons, a member of the ETHS District 202 board, said the YMCA is reflective of the greater 4th Ward community in how it welcomes residents from all of Evanston to partake of its resources.

Calder, a former YMCA board member, said in her time with the organization she saw its administrators take strides toward increasing inclusivity — from adjusting membership fees based on family size and income to implementing recreation programs for youth across the city.

In addition to these services, the McGaw YMCA also offers 172 affordable housing units in its Men’s Residence.

“When you talk about affordable housing, some people will react to the idea that it’s gonna be bad for whatever reason,” Wilson said. “It’s not a problem, and the Y to me is one of the perfect models of that.”

Wilson said the lack of both government-subsidized and market-rate affordable housing opportunities citywide is deeply important to both him and his constituents, calling it a “top priority” for him in his tenure on City Council.

Demorest, YJC’s executive director, said she thinks the 4th Ward could be a good place for the city to begin expanding its offering of affordable units.

“If the 4th really … were able to keep affordable housing and have this breadth of representation from fun restaurants to affluent houses to affordable houses, that could be the model for the rest of the city,” she said. “That range of economic diversity … creates the opportunity to have other kinds of diversity.”

Calder, who serves as chair of the city’s Housing and Homelessness Commission, said she didn’t see many opportunities to implement affordable housing in the 4th Ward due to a lack of building space and vacant lots in the area. Affordable units, she said, could potentially come from rental buildings subsidized by Connections for the Homeless, a homelessness prevention and aid organization in Evanston, through its permanent supportive housing initiative.

Maintaining infrastructure is another issue pertinent to the 4th Ward community, Wilson said. The Robert Crown Community Center, located in the southwest corner of the ward, is set to undergo major renovations and a possible reconstruction. The facility, more than 40 years old, currently offers ice skating, athletic facilities, and after-school and preschool programs.

Wilson said because the facility’s condition has declined and the city did not maintain it properly, the renovations will be costly.

“Getting our physical resources and assets into better condition is a top priority for the whole city, particularly the 4th Ward,” Wilson said.

Infrastructure concerns aside, Suvari said the 4th Ward has a downtown feel, encompassing businesses like artisan bread bakery Hewn and touching the Main Street shopping district with its southern border. But, she added that in her experience, the ward is also close-knit.

“I’ve become such good friends with everyone on my block,” she said. “It’s like ‘Leave It To Beaver,’ you can just go next door and get a cup of sugar. We have an open door policy.”

Residents described the neighborhood as “walkable” and friendly — Calder said people say hello when they pass each other and feel “very comfortable” striking up conversation with passersby.

But residents said just because the 4th Ward is self-sustaining doesn’t mean it’s isolating. They said the community is deeply concerned and engaged with citywide issues from affordable housing to gun violence.

Although violent crime in the area is infrequent, Suvari said her neighbors and fellow parents frequently discuss the issue.

“It’s not specific to the 4th Ward, but the gun violence that happens in the bigger community … really is unnerving to a parent,” Suvari said. “Everyone is very open-minded about exploring different ways to address this.”

Wilson said both he and his residents were accountable to the entirety of the city, considering the 4th Ward represents a variety of people.

The centrality and accessibility of the 4th Ward coupled with its engaged, open residents, Demorest said, makes it an ideal place to begin increasing Evanston’s socio-economic and racial inclusivity.

“Evanston is really well poised to do some wonderful work,” Demorest said. “We’ve got people that want to do it, we’ve got financial resources and nonprofits galore that want to do the work. … We want success across the whole community, and maybe the 4th Ward is where we can kind of start it. But it cannot reside there.”