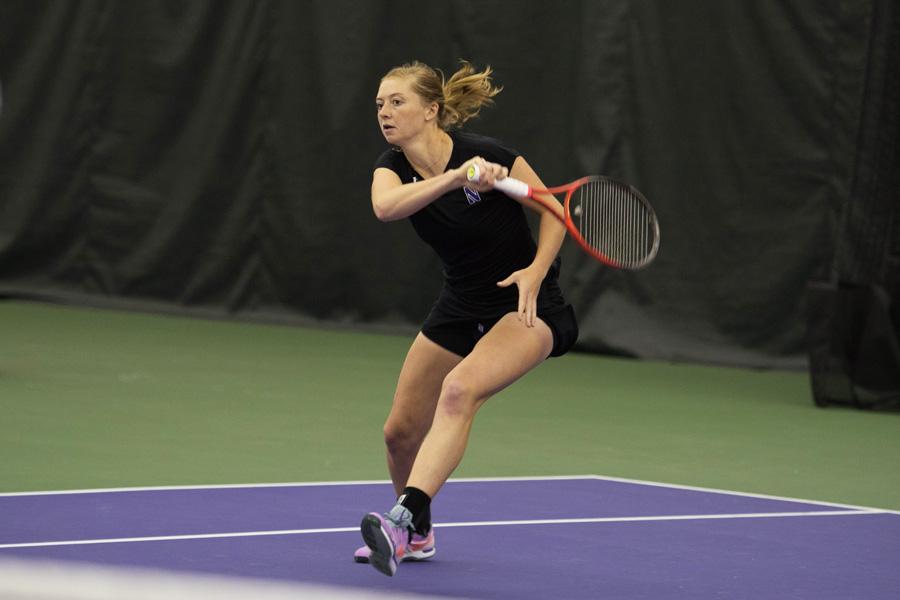 At a Northwestern women’s tennis match, you can hear many of the players talk to themselves, scream at themselves, yell “Mine!” One person you won’t hear very often, however, is Alicia Barnett, the team’s lone senior. She has always been a silent player. Throughout her time under coach Claire Pollard, Barnett earned herself 154 regular season wins on the singles and doubles courts.

Despite her success on the court, Barnett’s coaches describe her as “too nice.” Her father said she even befriends most of her opponents and rivals and always has since growing up in England.

That attitude has earned her a reputation as the team’s confidant. Barnett likes to note that this is the tightest-knit team she has been on in her four years, and that she knows the ins and outs of all her teammates.

Her teammates said they feel the same and find her to be among their best friends.

“She just has a really great attitude and makes everyone feel like a superstar even though she’s the real superstar,” said sophomore Erin Larner, one of Barnett’s doubles partners. “She has everyone’s best interest at heart. … For me, she’s a role model and she gives me someone older to look up to.”

Her former doubles partner Veronica Corning (Weinberg ‘14) also saw how her attitude affected the team in a positive way.

“She always brought out the best in others, no matter who was having a bad day,” Corning said. “She was always able to pick me up, I’m really grateful for that and owe her for it.”

Because of her nice demeanor on the court, Barnett lacks some killer instinct. Pollard jokes about having limited success at coaching that aggression into Barnett’s game.

“I like to call her ‘affectionately ditsy,’” Pollard joked. “She’s a bright girl; she’s just so damn nice. You can’t be nice in tennis, and I think she’s gradually coming to terms with that, a little more of an assassin’s mentality, a little more of a killer instinct.”

Barnett has competed since she was seven years old, and her father, Nigel Barnett, said he found tennis to be a way to teach intangibles that can play a part off the court.

“It reflects life,” he said. “There’s nowhere to hide in tennis. It’s gladiatorial, one-on-one. You can’t say, ‘It’s my teammate who let me down,’ it’s yourself. She’s grown a huge amount over the years. … Tennis is a fantastic thing to making mature (people) and being disciplined.”

Lorraine Ristic, Alicia Barnett’s first coach, helped start her on the tennis path and coached her until she was 16.

Ristic coached all the Barnett children in tennis and said she saw each of them grow, mature and improve — but especially Alicia Barnett. Ristic noted how good Alicia Barnett was as a 13- and 14-year-old and how hard she worked to never miss a ball.

Barnett came to the Wildcats as the sole freshman and will be graduating as the sole senior in her class. In that time, Barnett has fought for two Big Ten titles and in numerous NCAA Tournament matches – competing as deep as the Round of 16 her freshman year.

In that time, she has grown as a player, advancing up NU’s singles courts to No. 1 last year before settling at No. 3 for her senior year. Her greatest success came at the No. 3 spot as a sophomore. That year, Alicia Barnett did not lose a Big Ten match during the regular season.

Part of that was a change in attitude. Being from England, Alicia Barnett describes herself as pessimistic, but she has slowly changed that to be more positive.

“She’s got all-court game,” Pollard said. “She’s learned to dig deep to get more out of herself and fight some of the, what I call, ‘British tendencies’ because as a British nation we can be a little pessimistic, a little cynical. … She’s learned, what I think, are some of the great things Americans have: confidence, a little swag, almost verging on the arrogant which are important qualities to perform at a high level.”

Going into her junior year, Barnett suffered a heartbreaking loss off the court.

Early in her college career, her mother developed terminal cancer. Doctors gave her mother 12 months to live, but she pushed it to 14. In September 2014, Barnett’s mother passed away.

Barnett found the balance between her tennis life and personal life even more difficult with the loss of her mother. Ultimately, she found a way to integrate the two.

“It was mortifying,” Barnett said. “It was a really tough time. I came back and used tennis as a vehicle to channel whatever emotions I was feeling. It was probably more confusion than anything. Everything I was feeling … came out on the court.”

Since Jennifer Barnett died before school started, Nigel Barnett said he was especially grateful to have his daughter home with the family. When she returned to school, she found continued support from her teammates.

“(Alicia) was there, she saw it all happen,” he said. “At least she was home for that period. … Tennis was an escape. Coming here, away from all the memories was good. Having all her teammates was good.”

Pollard noted the struggle Alicia Barnett goes through every day. The coach sees the court as a “sacred place” for all her players and saw Alicia Barnett use it as an escape.

Barnett said she noticed her performance slip a little due to the struggle to separate her personal life from her tennis life.

“My sophomore year, I had a bit of a breakthrough in my mental game,” she said. “I felt confident and sure of myself. I definitely had an American confidence feel rather than my English pissy-ness. Last year set me back a little bit. It was hard to keep my personal life from the tennis court, but I’ve grown in that sense.”

Barnett competed hard, using her pain as a motivator for her performance. Playing at No. 1 singles for the first time in her career added some pressure, but nevertheless she fought her way to a winning record overall.

In her final year, she stepped back onto the No. 3 singles court to close out the season. The senior notched her second-best conference record at 9-2. Although the season did not end as planned with a Big Ten title, her teammates said they still want to succeed for her during the postseason.

“It has been a real privilege to play doubles with her the last part of this year,” junior Brooke Rischbieth said. “She has been a great leader on our team.”

This season has been a whirlwind for Barnett, but she said the finality of this season did not sink in until Senior Day against Michigan. After the match ended, she did her best to hold back tears during interviews. When she got to the locker room, she broke down. Some of her greatest college memories happened in the Combe Tennis Center, including a Big Ten Championship and NCAA victories.

With her collegiate tennis career wrapping up, Barnett plans on competing at the professional level. She will be heading home to compete in tournaments around the United Kingdom. She said she hopes to one day compete in a Grand Slam tournament.

“Graduating now, I know what kind of person I am,” Alicia Barnett said. “Tennis has really helped me develop that. It’s given me a lot of opportunities to improve myself as a person.”