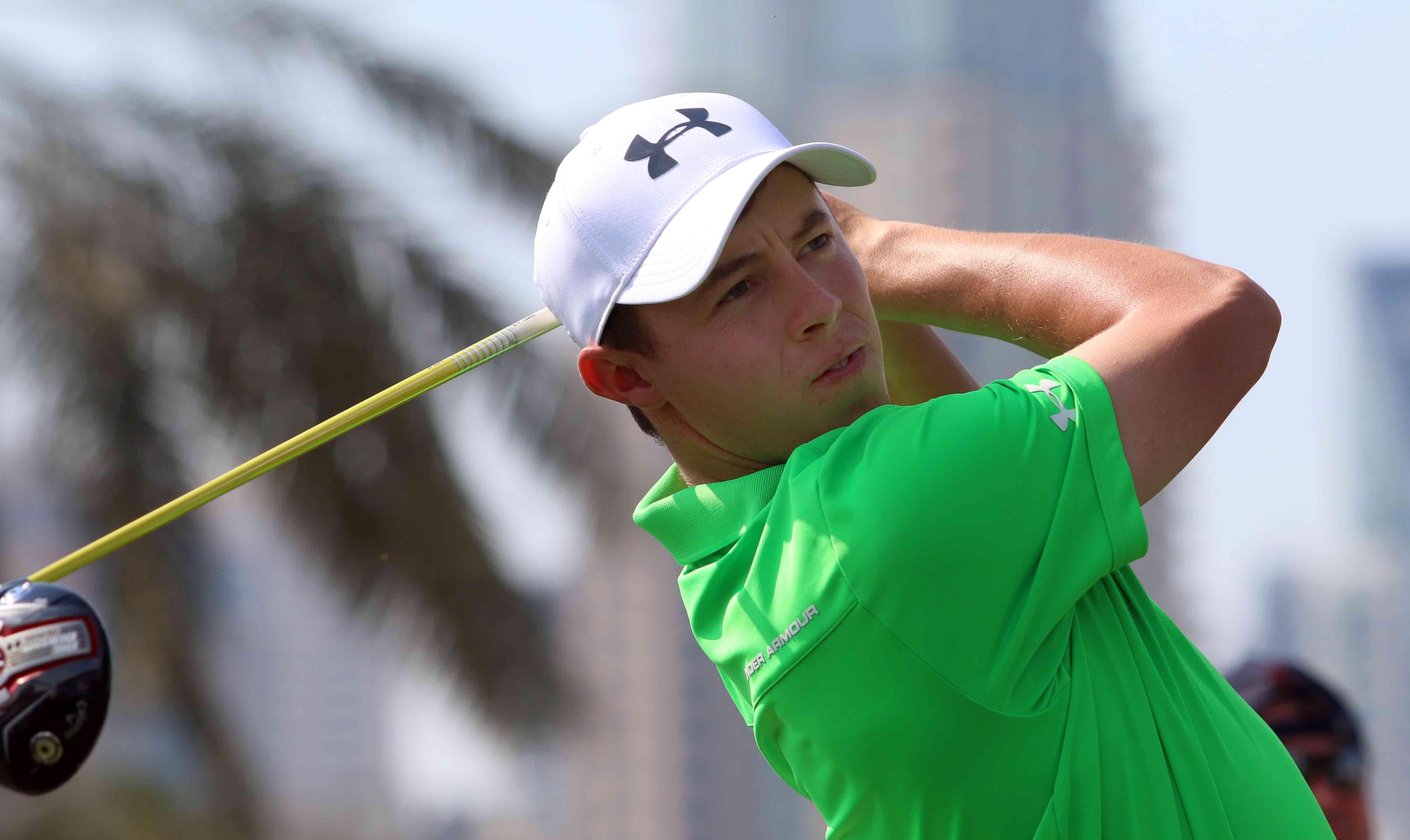 Matt Fitzpatrick follows through on a drive. The former Wildcats star is making a name for himself outside of Evanston. (Source: Gary Prior)

Matt Fitzpatrick follows through on a drive. The former Wildcats star is making a name for himself outside of Evanston.

Matt Fitzpatrick was back on Northwestern’s campus last week, revisiting the place he called home just a few short years ago. A lot has changed since then, but at first glance Fitzpatrick could easily be mistaken for any other NU student soaking in idyllic views of Lake Michigan and catching up with his college friends over dinner in downtown Chicago.

But if the past year has shown us anything, it’s that the former Wildcats’ golf star is far from a typical 21-year-old — and far from a typical collegiate golfer, for that matter. After all, it was less than a month ago that the Englishman went toe-to-toe with the likes of Jordan Spieth, Rory McIlroy, and Jason Day in front of millions of captivated viewers at one of golf’s most hallowed venues.

Although it was his countryman Danny Willett who ultimately donned the green jacket as the 2016 Masters champion, Fitzpatrick left Augusta National with no shortage of media buzz. His sterling final round of 5-under-par 67 matched the low round on the course for the day and propelled him into a tied-for-7th-place finish at the season’s first major championship.

It was a week Fitzpatrick won’t soon forget, but if he has anything to say about it, it will be the first of many times that his name can be found near the top of a PGA Tour leaderboard.

“It’s a very special experience, especially at a place like that, and I felt like with it being my second time playing at the Masters I was really just able to enjoy every second of it,” Fitzpatrick said. “It’s the kind of week you hope you can use to build on for future tournaments.”

Fitzpatrick’s Masters performance may have caught the attention of casual golf fans for the first time, but for those who follow the game closely, the Sheffield-native has long been a known commodity. His notoriety predates his time at NU, when he was one of the world’s premier junior golfers and garnered attention from powerhouse collegiate programs across the United States.

In the summer of 2013, shortly before beginning his career at NU, Fitzpatrick’s stock skyrocketed after he finished as the top amateur at the British Open and won the U.S. Amateur Championship. Widely considered the most prestigious amateur golf event in the world, the U.S. Amateur boasts such illustrious former champions as Tiger Woods, Jack Nicklaus and Phil Mickelson, and Fitzpatrick’s commanding win propelled him to the top of the World Amateur Golf Rankings.

Yet for all of the justifiable hype surrounding his collegiate future, Fitzpatrick’s recruitment process was relatively low-key. After consulting with his parents and his personal coach Pete Cowen he elected to only visit NU and gave the Cats his commitment days later.

NU’s exceptional academic reputation and Cowen’s close relationship with then-NU head coach Pat Goss both played pivotal roles in Fitzpatrick’s decision. Goss has a proven track record of working with top-level professionals, including serving as the longtime swing coach for NU’s most famous golfing alum, former No. 1 player in the world Luke Donald.

“If it turned out that golf didn’t work out, I wanted to have that NU degree to fall back on,” Fitzpatrick said. “And obviously the opportunity to work with the coaches here, Pat Goss and David Inglis, they’re both great guys and great coaches so that was something that stood out to me right away.”

Fitzpatrick arrived in Evanston with considerably high expectations, but right away his coaches and teammates were struck by his work ethic and his down-to-earth demeanor. Inglis, now NU’s men’s golf coach, was an assistant at the time, and often recounts the story of Fitzpatrick’s first practice with his new teammates in the fall of 2013.

Playing a practice round at a course they were set to compete at later that week, Inglis recalls Fitzpatrick walking down the first hole with his alignment sticks and compass, meticulously taking notes on anything that might give him an edge in the upcoming tournament. When he reached the first green he then took a detailed record of the break of every possible putt based on the hole locations from previous seasons. He proceeded to do the same for every hole on the course.

“Here’s a guy who shows up on campus about three weeks removed from winning the U.S. (Amateur), and he’s got about 10,000 Twitter followers and everyone knows who he is,” Inglis said. “And it stops the other four guys in their tracks and they’re all like ‘What’s he doing, what’s he writing down?’ That’s the value of having somebody who’s such a great player and somebody like Matt, he just led by example and made the team better.”

Behind the stellar play of Fitzpatrick and then-senior Jack Perry, the Cats won two of five events that fall and firmly established themselves as one of the best teams in the nation. As bright as Fitzpatrick’s collegiate future appeared to be, however, the much larger stage of professional golf beckoned, as his play that summer and fall earned him upwards of half-a-dozen invitations to PGA Tour events, Inglis said. After weighing his options, Fitzpatrick elected to forgo the remainder of his collegiate career and left school to pursue a full-time career in golf in January 2014.

Although Inglis laments the absence of his star player — who, had he remained in college, would currently be a junior preparing to help NU vie for a spot in the upcoming NCAA Championships — there is little doubt in his mind that joining the professional ranks was the right decision for Fitzpatrick.

The evidence clearly suggests that Inglis is correct in this assessment. In 2015, his first season playing a full professional schedule, Fitzpatrick led all players on the European Tour with 10 top-10 finishes, an all-time record for a European Tour rookie. Included was a victory at the British Masters in October, which helped earn him the distinction of being named the tour’s golfer of the month.

Fitzpatrick’s play has seen him rise to the upper echelons of the sport more rapidly than many could have predicted. He currently sits at No. 41 in the Official World Golf Rankings despite being years — if not decades — younger than most of his peers. His career earnings currently sit at over $3.3 million with several months remaining before his 22nd birthday.

Yet, those who know him best insist that despite all of the recent changes in his life — the wealth, the travel and the mounting celebrity — Fitzpatrick has remained the same person they have always known by staying thoughtful, genuine and an unwavering believer in his own abilities.

Fitzpatrick’s former teammate Josh Jamieson, currently a senior and one of NU’s top players, recalls meeting Fitzpatrick for the first time while competing for his native Scotland in a junior tournament as a 17-year-old. Jamieson and Fitzpatrick played each other in a head-to-head singles match that day, a match that Jamieson is quick to point out he won, marking the last time he can recall beating his future teammate.

Despite the brevity of Fitzpatrick’s stint at NU, Jamieson said he still considers Fitzpatrick to be one of his closest friends, and the two continue to communicate often. Jamieson has travelled to watch Fitzpatrick at a number of events over the past year, including this year’s Masters, where Jamieson got a look at his friend’s new life at the highest level of professional golf.

“It would be really easy for him to kind of forget the rest of us and move on with his life, but he’s really done a great job of keeping in contact and inviting me to some of these places, and he’s just been a great friend,” Jamieson said. “I mean he’s out there chatting to me while he’s playing a practice round at Augusta for The Masters or standing next to Rory McIlroy on the putting green, but it’s almost like nothing’s changed. He’s still Matt.”

As Fitzpatrick’s profile has grown, so too have the inevitable comparisons to Donald, the former Wildcat who is arguably the most accomplished English golfer of the 2000s. A four-time All-American and 1999 NCAA individual champion during his time at NU before becoming one of the top professional players in the world, Donald has set a lofty standard for all subsequent NU golfers. Now many golf experts say Fitzpatrick’s career could follow a similar trajectory.

As someone who has gotten to know both players well over the years, Inglis said the comparison is justified in some ways. Both hail from England and were the top amateurs in the world upon enrolling at NU, and perhaps most importantly, both have great heads for the game, Inglis said.

And just like he has with Donald, Inglis has learned not to doubt Fitzpatrick’s abilities on the course.

“He just has that ultra-belief in himself that it takes to compete at the top level, and he has a wise head on young shoulders,” Inglis said. “He’s really the real deal. I know he feels like he can compete for major championships, and if he continues to improve the way he has I think he’s going to be one of the best players out there for a long time.”

Fitzpatrick’s recent success in Europe has prompted many to speculate about whether a full-time move to the PGA Tour might be in the cards in the near future. That speculation was furthered fueled by his recent commitment to play in The Players Championship at TPC Sawgrass in Ponte Vedra Beach, Florida from May 12-15, but Fitzpatrick continues to insist that he will play primarily in Europe for the time being.

He’s still only 21, of course, and has a full career ahead of him to compete against the world’s best and contend for major championships in the U.S. Yet as he continues to check goals off of his to-do list at a blistering pace, noise about when he will make the permanent transition to this side of the pond will only grow louder.

For now though, his focus is squarely on one goal: playing well enough this season to earn himself a spot on the European Ryder Cup team, where he hopes to help the team defeat its American opponents for the third consecutive time.

“The Ryder Cup is the obvious goal, and to get there it’s just going to be about taking each week as it comes,” Fitzpatrick said. “Playing in that event has always been a dream and something I’ve worked towards, so hopefully that’s a dream I’ll get to live this year.”