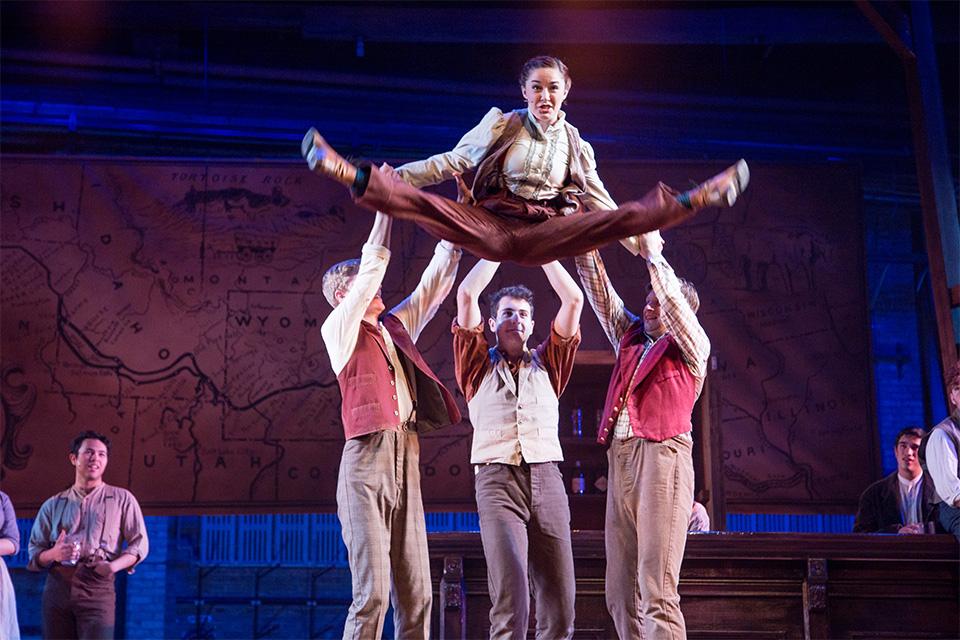 On their last day in Barcelona, over breakfast in a crowded restaurant, the idea for the newest version of Northwestern’s oldest theatrical tradition finally hit a group of the Waa-Mu Show writers.

“It was like this kind of magical ‘aha’ moment that we were all waiting for and we were getting really frustrated because there were were several days it wasn’t happening,” said Waa-Mu Show co-chair and Communication senior Fergus Inder. “The first time it really happened was this idea of the Oregon Trail was brought up.”

The head writers, co-chairs and director traveled to Barcelona in August for a week-long artistic retreat that takes Waa-Mu Show participants to different destinations, like last year’s retreat to France, in search of an idea for the annual musical.

After a summer of research and the culmination of time in Spain, the team developed the idea for this year’s Waa-Mu Show, “Another Way West,” a story about an Irish family exploring the Oregon Trail.

The students were all in agreement that they wanted to explore a “journey story,” Inder said. He said during the retreat, they had discussed having themes centered around gap years, Rumspringa or “The Odyssey” before someone finally pitched the idea of the Oregon Trail.

There are two parallel storylines in this year’s production, Inder said. One focuses on an Irish family moving west on the Oregon Trail in 1853, and the other on a history graduate student reading her ancestor’s journal and retracing her footsteps on the trail.

“A lot of the things that we talk about is, does the story sing?” said co-head writer Jonathan Bauerfeld, a Bienen senior. “The Irish family sings because they’re Irish.”

This preparation was just the beginning of the Waa-Mu creation process that runs from August to May and is a culmination of more than 150 Northwestern students’ work. “Another Way West” opens Friday and runs through May 8 in Cahn Auditorium.

“It’s crazy to do what we’re doing,” Bauerfeld said. “It’s so many people, there are so many different ideas and we have to write it in such a short amount of time. Musicals of this scale usually have just two or three writers and four or five years to develop.”

Waa-Mu, now in its 85th year, was formed when the Women’s Athletic Association and the Men’s Union came together in 1929 to put on the first show.

At its core, Inder said Waa-Mu is an educational theater institution designed to give undergraduates the opportunity to conceive, produce and write a full-length musical every year with resources like professional designers and directors — and enough money to make it happen.

Waa-Mu is not run through the Student Theatre Coalition, which differentiates it from other on-campus student productions in that it is its own entity, Bauerfeld said.

Inder said the development of this year’s script began in the fall with creative meetings. In the process of creating the musical each year, a group of Waa-Mu-affiliated artists gather to figure out who the characters are and what the time period is, creating an outline by the end of the quarter.

Auditions occur at the beginning of Winter Quarter. Because the cast is decided then — while the show is still in its early stages — cast members help inform the writing process, said co-head writer and Communication sophomore Maxwell Beer.

For example, one of the characters in the show, “Sepros,” was created spontaneously. When an actor who was able to do a Greek accent auditioned, the writers saw potential, Beer said.

“Never before did we think there was going to be a Greek research assistant, but now he’s a large character in the play,” Beer said. “Who you are as a person can affect, like, how a character is viewed.”

After the cast is determined, students in a winter class help write the show’s songs, melodies, and dialogue, Bauerfeld said.

He said the students must work on figuring out how to transform specific big moments in the show, like the river crossing at the end of Act One in this show, into songs.

Choreography co-chair Nicolas Leighton summed up his job as a choreographer for the show in one word: stressful. Although the head writers and co-chairs strive to pick a theme that can “sing,” it’s a bit more difficult to make sure it has a clear concept in terms of dance, the Weinberg senior said.

“They said, ‘We’re doing a show on the Oregon Trail,’” Leighton said. “And so of course our first thought is, ‘What the hell are we supposed to do?’”

Leighton said luckily the “Irish” theme made the choreography more cohesive and he was able to incorporate an Irish step-dance number. But for the most part, he said the choreography is abstract in that the ensemble and movements are used primarily to depict moving across a country.

“(The choreography process) embodies a lot of what Waa-Mu is, and it’s been really great to experience it from a choreography perspective,” Leighton said. “I’m able to go … in between the writers, in between the director and talk to the actors and figure out, like, ‘what does this moment mean to you?’”

Even as the show reaches the end of its rehearsal process, line changes are made, songs are cut and choreography is tweaked, Bauerfeld said. Although Waa-Mu is driven by the students, he said the show would not be possible without the help of professionals.

“We just have to focus on writing and a magical set appears in front of us and amazing costumes just get put on people,” Bauerfeld said. “There’s all these professional designers creating a world that we thought of in August, which is a really cool thing that is unique to Waa-Mu.”