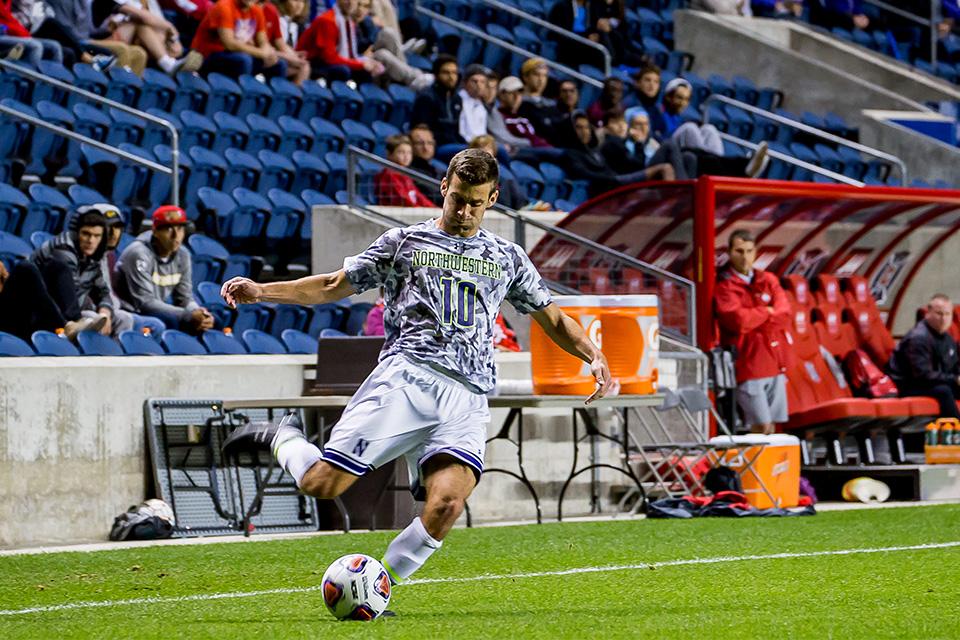 Joey Calistri readies to cross the ball. Following his senior season, the forward signed a contract with MLS’s Chicago Fire and is working to make a name as a professional. (Daily file photo by Zack Laurence)

Joey Calistri readies to cross the ball. Following his senior season, the forward signed a contract with MLS’s Chicago Fire and is working to make a name as a professional.

The confines of Toyota Park, the Bridgeview home of the MLS’s Chicago Fire, have always been a comfort zone for Joey Calistri.

Throughout his pre-college years, Calistri participated in the Fire’s youth camps and played on their academy team. During the summer of 2015, before Calistri’s senior year, he interned with the franchise’s front office. And on six occasions during Northwestern’s 2015 season last autumn, he and the rest of the team — displaced by Lakeside Field renovations — played a home match at Toyota Park.

But the afternoon of March 6 was different.

When Calistri stepped onto the Toyota Park pitch as an 81st minute substitute, he did so on the same field as former World Cup champions David Villa and Andrea Pirlo, who were both suited up for visiting New York City FC, and under the gaze of an opening day crowd of 17,768.

On that afternoon, Calistri made his professional MLS debut.

“It’s pretty hard to describe for me, being from Chicago, stepping out onto the field,” said Calistri, a native of Deerfield, Illinois. “At the moment, I was just focused on the game and doing my job, but when I looked back it, it was a really cool experience. I’ll definitely remember it forever.”

The moment concluded a rushed, eventful offseason transition for Calistri.

After the Wildcats’ season ended with a loss in the Big Ten Tournament on November 8, 2015, finishing Calistri’s collegiate career as the second-leading scorer in NU history, the 5-foot-10 forward immediately began working with the Cats’ coaching staff to keep in shape for the next step in his career.

On December 17, he signed a homegrown contract with the Fire — a special contract type MLS clubs can use to bypass the draft in order to sign local players — at the same time as Drew Conner, a fellow Chicago area product and star at Big Ten rival Wisconsin.

With NU coach Tim Lenahan in attendance, Calistri then started in the Fire’s opening preseason contest in Florida on February 11. Thirteen days later, he scored twice to boost the Fire to a 4-0 win in their third preseason game.

The same constant commitment to hard work that Lenahan saw from Calistri throughout the latter’s four years in Evanston translated at once to the professional level, the coach said.

“You don’t quit on Joey Calistri,” said Lenahan, who still texts with his former player several times a week.

“(The MLS) is getting better and better and it’s tough for especially an attacking American player to make an impact. As he tactically becomes more aware of what he has to do, he could become a very good player in that league. I think he has a really good career ahead of him.”

Calistri played the final 9 minutes of regulation and 7 minutes of stoppage time in the Fire’s 4-3 loss on that momentous March 6 afternoon, sending in several dangerous crosses that were barely cleared away.

But Calistri has seen only a little first-team action in the time since. He was subbed on in the 84th minute in the following match, then the 90th a week later, then left on the bench for three consecutive matches since then.

Meanwhile, the Fire, who finished dead last in MLS last season with just eight wins in 34 games, have struggled to earn points this year with a 24-man roster that returned just 10 men from a year ago. The club has scored only 3 goals in five games since its opener and limped to a record of 1-2-3.

Within the mass of young players the rebuilding Fire have compiled, however, Calistri has stood out to coach Veljko Paunovic for an unsurprising reason.

“Joey … is working very hard during all this time with the team,” Paunovic said. “We are very fortunate to have a player and a guy like him. It’s important that he can go through this process of developing and getting minutes in the league … smoothly. As soon as he is ready and as soon as we believe he can help the team on the field, we will not have an issue to make him play.”

Paunovic, who played striker during his own 16-year professional career, is also new to the organization this year, having been hired less than a month before Calistri signed. Those commonalities have helped him and Calistri develop a tight bond, much to the latter’s benefit.

“He’s pulled me aside and given me some pointers on positioning, types of runs to make and stuff like that,” Calistri said. “The fact that he’s played on such a high level makes it a lot easier for me to learn from him. I’ve learned a lot from Pauno, so it’s been a lot of fun playing for him.”

The Fire’s schedule next month is tight: the team will play five games between May 11 and May 28, including a one-week stretch in which they play road matches in Massachusetts, New Jersey and British Columbia. That fatiguing slate will give Calistri a chance for more playing time, said Paunovic, who did not rule out the possibility of him even starting a game at some point.

Yet Calistri must first earn that opportunity among an assorted collection of grizzled veterans and fresh rookies he said are just now starting to gel. His switch from NU senior to MLS rookie has been abrupt — he’s likely to miss graduation on June 17 because Chicago plays at Colorado the next day — but his comfort level with the organization, with the stadium and with the sport in which he’s immersed his life has kept the transition steady.

This coming Saturday, the Fire will host D.C. United at Toyota Park after a 14-day break in the schedule. It’s a match Paunovic said he hopes can be a turning point in his young squad’s season. But for Calistri, it’s just the next step in a whirlwind year of learning, evolving and waiting for his chance to step foot once again on the all-so-familiar Toyota Park pitch.

“We have a lot of talented players on this team, and for me to be here is a privilege,” Calistri said. “I’m just working every day so that when I get my shot … I make the most of it.”