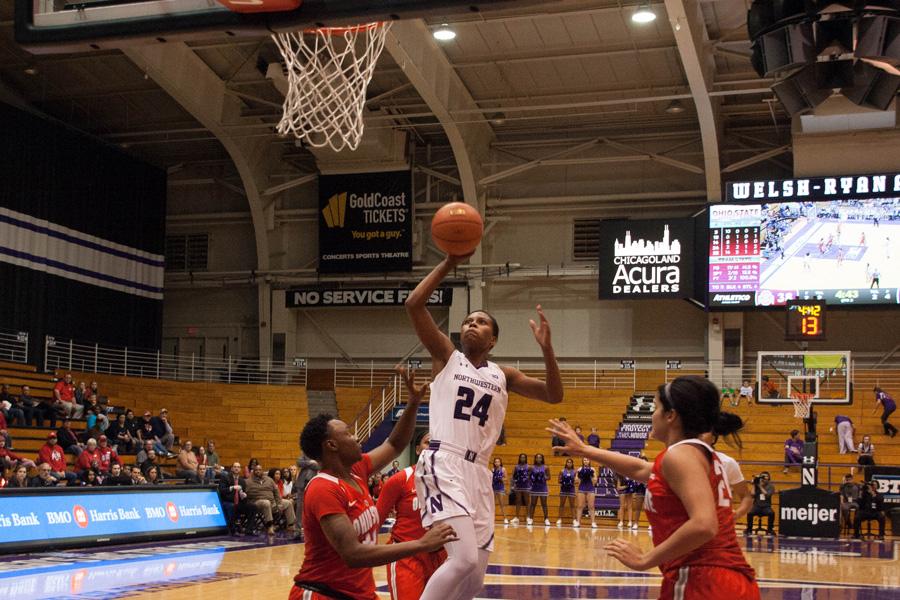 Christen Inman leaps toward the basket. The junior guard recently reached 1,000 career points and has been a lynchpin in NU’s lineup since her freshman year. (Daily file photo by Katie Pach)

Christen Inman leaps toward the basket. The junior guard recently reached 1,000 career points and has been a lynchpin in NU’s lineup since her freshman year.

Women’s Basketball: Christen Inman is the ‘glue’ that holds Northwestern together

The year is 2011. It’s a hot summer day in Dallas, and some of the state’s most talented high school basketball players are busy battling it out in an AAU tournament. Inside the gym, a young guard from the small city of Katy, Texas, four hours south of Dallas, isn’t thinking about the weather — she’s thinking about winning.

Headed into her junior year of high school, the talented guard is getting hacked up-and-down the court and pushed around in an intense game. At one point, she hits the floor and badly skins her knee. Blood begins to flow down her leg, but she doesn’t seem to notice.

Christen Inman is locked in.

“I looked up and she was just in the moment,” Chris Inman, her father, said. “She was down in a defensive stance, just playing. I saw that hunger in her eyes. I remember thinking, ‘Wow, she is for real.’”

That mentality, embedded in her willingness to supplement athleticism and shooting ability with constant effort and hustle, helped Inman score more than 2,500 points in her prep career and lead Seven Lakes High School to its first ever district championship. It also led her to become the No. 64 recruit in the nation for the class of 2013.

Inman’s drive to succeed was also apparent in the classroom, as she ranked in the top 6 percent of her high school class. Thanks to her strong academic standing, she was recruited by top-20 universities Stanford, Vanderbilt, Rice and Northwestern.

After participating in one of the many summer basketball camps, Inman received an offer from Rice, located less than 45 minutes away from her hometown. She was all set to commit, until her dad convinced her to give the Wildcats a shot.

“When (NU) finally got me up here, it was my first time in Chicago, and I just fell in love with the campus and the people,” Inman said.

Inman has been active and hard-working her whole life, her father said. Her parents put her in gymnastics at a young age, she played club soccer and club basketball for numerous years, and she was even in an accelerated piano program as a kid.

Yet, despite so much on her plate, Inman always remained calm. That was true from a young age to when she began developing into an elite basketball player.

“We gave her direction and she bought into it,” Chris Inman said. “From all the AP courses to the extra work in the gym, you couldn’t find a player that worked any harder, that listened more intently than she did … she’s always been tuned in like that.”

When she got to Evanston, Inman continued to work as hard as she could. Her effort in practice impressed coach Joe McKeown enough to put her in the starting lineup for the first game of the 2013-14 season, her freshman year. Against UIC, she put up 12 points as NU cruised to victory.

Inman started 31 of NU’s 33 games as a freshman, averaging 11.7 points per contest. She led the team in both field goal percentage and free throw percentage.

“I just wanted to come in and do my best, and at the end of the day I could be happy with that,” Inman said. “When I got here and I was contributing so much, it was just a product of me trying to be the best I could for the team.”

As a sophomore, Inman missed time with injuries but battled back and was a key part of an NU team that went 12-6 in the Big Ten, qualifying for the school’s first NCAA Tournament appearance since 1997.

Now a junior, Inman is a staple in the Cats’ lineup. She’s playing almost 36 minutes per game and reached 1,000 career points in NU’s loss to Rutgers, yet sometimes gets overlooked in comparison to her teammates.

Junior forward Nia Coffey is a preseason All-Big Ten player who averages 20 points and 10 rebounds per game. Junior guard Ashley Deary is the NCAA leader in steals per game and leads the team in assists. Senior guard Maggie Lyon is the sharpshooter who holds NU’s career record for 3-pointers.

What makes Inman different is that she does a little bit of everything.

“My role is just to be that glue player,” Inman said. “To do the things that may not show up so much in the stat book, to be a positive force on this team and to do anything in my power to help us win.”

Averaging just under 15 points per game this season, Inman has shown she can explode offensively when she needs to. She put up 28 points in a win over Eastern Washington and 25 each in victories over Loyola and Nebraska.

Inman is also averaging career-highs in rebounds, assists and steals. She has grabbed seven rebounds three times this year, and dished out nine assists in a loss to Indiana.

“She’s a balanced player now,” McKeown said. “She works on the things she knows she needs to get better at, and when you have a player like that, the sky’s the limit.”

McKeown said Inman has grown into a very consistent player, and become more of a leader. But Inman isn’t barking orders at teammates or yelling at them in huddle. The way she leads is a result of a basketball mindset she’s had since high school.

Her coach added that no matter the situation, she is calm and only focused one thing: winning.

“When she’s on the court, there’s a comfort zone (for her teammates), because she’s a calming influence,” McKeown said. “From a leadership standpoint, she does it in her own way. It’s not a boisterous, loud thing, it’s an inner confidence that she transmits to the team.”

Inman has plenty of respect among her teammates, especially from her fellow juniors. Deary praised her athleticism and basketball IQ, and Coffey complimented her defense and said she is well-respected in the locker room.

However, it was the senior, Lyon, who summed up what Inman is all about — effort and consistency.

“She always brings a positive attitude in practice,” Lyon said. “You know what you’re going to get out of her every day.”

It’s been an up-and-down season for the Cats, who climbed to No. 12 in the AP poll after a 9-0 start, but are just 3-10 in conference play. Yet no matter what the situation is, Christen Inman is still that hard-working kid who played defense with a bleeding knee back in AAU.

“I always tell her that when you’re playing a game, if you don’t have your best stuff that night, do some other things,” her father said. “Keep playing. Rebound. Do something besides score the ball. That’s kind of what she does for Northwestern, a whole lot of little things … that help teams win.”