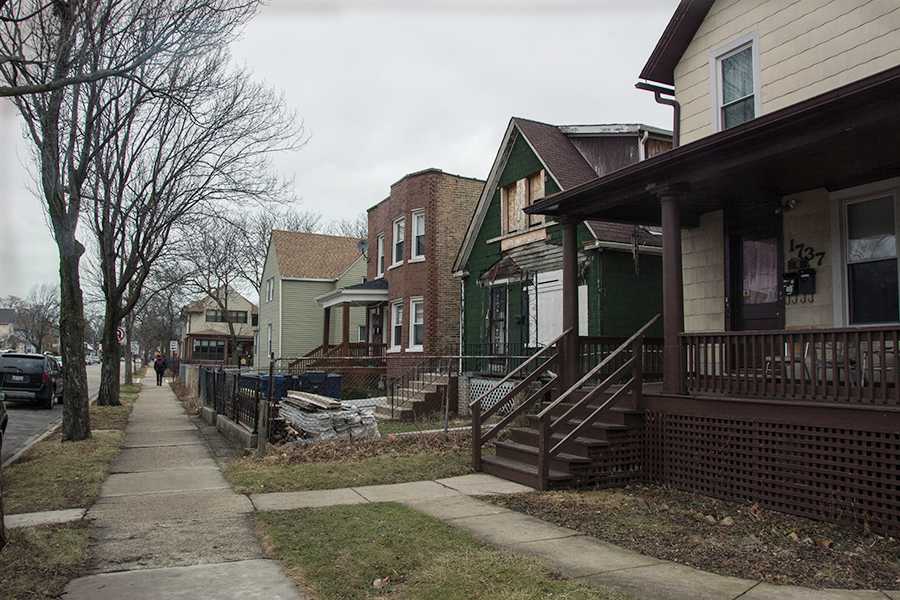 Homes line the block of Dodge Avenue between Church Street and Lyons Street in Evanston’s 5th Ward. Residents identified access to affordable housing as an issue in both the ward and the city at large. (Leeks Lim/The Daily Northwestern)

Homes line the block of Dodge Avenue between Church Street and Lyons Street in Evanston’s 5th Ward. Residents identified access to affordable housing as an issue in both the ward and the city at large.

Colette Allen acknowledges the 5th Ward has problems. Other residents and community leaders agree — safety and economic inequality have been issues in the 5th Ward for decades.

Those problems, however, are being tackled head on by 5th Ward residents, said Allen, who currently works in the ward and spent her childhood in the area. Like any community, the 5th Ward has some good attributes and some that need more attention, but she said residents are proud of their home and consistently work to improve it.

“As someone who’s a second-generation Evanstonian, I can say certainly we don’t see our community that way,” Allen said regarding negative perceptions about the ward. “We see it as a community with a rich history and that has a lot of services and opportunities.”

Evanston’s 5th Ward — bordered by McCormick Boulevard to the west, Church Street to the south and Noyes Street to the north — encompasses low-income areas, but it also contains areas near Northwestern where students and primarily upper-middle class families live. Residents and community leaders in the 5th Ward said they feel the reputation of their ward is marred by economic woes and violence, and that community-wide efforts to increase the area’s liveability and opportunity are often overlooked.

Allen grew up in Evanston, and her family moved to the 5th Ward when she was in middle school. She said the 5th Ward was a tight-knit community when she was growing up in the 1950s and 60s, but when she moved back to Evanston, she noticed the ward had changed since her childhood. Crime had increased throughout the west side of the 5th Ward, many of her longtime neighbors had moved elsewhere and the community did not feel as connected without a neighborhood school, she said.

In the past two weeks, there have been at least two reports of shots fired at individuals in the ward. The first incident occurred on Jan. 29 near Darrow Avenue and Foster Street and the second report came on Feb. 1 from the 2000 block of Emerson Street.

“There just wasn’t that much violence growing up as there is now,” Allen said. “It’s a sign of changing times, but it’s also something we, as a community, are trying to counter.”

In July, Allen began working as director of Family Focus Evanston, an organization in the 5th Ward that focuses on early childhood and youth development through educational programming such as classes and cultural events. She said she has been working with other organizations, leaders and residents to improve not only programs available to 5th Ward residents, but also perceptions of the ward in the city at large.

“People forget about how much the 5th Ward contains,” Ald. Delores Holmes (5th) said. “It’s a diverse community, and you have to be aware of how many different racial, economic and social differences there are between people here.”

Like Allen, Holmes spent her childhood in the 5th Ward. She has lived in the ward for more than 60 years and was active in the community before her tenure on City Council, building connections through social work and involvement in groups such as the NAACP and the League of Women Voters. She won her initial election to the council in 2005 with 76 percent of the vote, and has since served three terms as 5th Ward alderman.

Housing in the 5th Ward has been an issue since her first day as an alderman, Holmes said. Residents in the western portion of the 5th Ward were hurt in the late 2000s during the economic recession in the housing market and are still recovering, she said.

“A lot of houses were lost by families in the ward,” Holmes said. “We were able to work with different government organizations to get funding to help families. It helped a lot of people, but it wasn’t nearly enough.”

The largest stride in affordable housing in Evanston has come with the changes to the affordable housing ordinance in late 2015, said Sue Loellbach, interim executive director of development for Connections for the Homeless, a nonprofit organization headquartered in the 5th Ward that focuses on reducing and preventing homelessness in the city. These changes included making developers offer affordable options for rental units in areas near transit stops and having housing available for those at 80 percent of the median Evanston income.

“While these are great strides, this is just the beginning,” Loellbach said. “We need to have options available for people at 50 percent or 30 percent of the median income. It’s progress, but just the first step.”

Loellbach said permanent residents of areas like the 5th Ward are seeing their rents spike due to close proximity to NU and economic development on Noyes Street. She said the increase in rent and housing costs puts 5th Ward residents at a greater risk of homelessness, which the organization defines as when housing costs account for more than 50 percent of their income.

“Evanston is straddling the line between Chicago and the North Shore, one of the wealthiest areas in the world,” Loellbach said. “There’s a real disparity in Evanston, and it disproportionately affects African-American and Hispanic residents, often living on the west side.”

Barbara Blades has been a resident of the 5th Ward since 1964, when she and her husband moved to an apartment on Ridge Street before moving to a house on Maple Avenue. She lives on the east side of the 5th Ward and said there has always been a racial and socioeconomic divide — between predominantly white residents near NU and predominantly black residents on the west side — across Green Bay Road.

“It’s really hard for people to mingle between the two different sides of the neighborhood, and it’s hard to overcome,” Blades said. “There were some African-American families here but never many. There’s a big divide and it’s mainly geographic.”

Blades said the divide was aggravated in the 2000s when the east side of the ward moved from being populated by families to being aimed toward student housing.

“With more students moving in, it meant a lot of permanent residents moving out and landlords increasing rent costs for apartments in the ward,” she said. “While a lot of the families who owned homes, who lived on the east part of the ward stayed despite more nuisance problems, it drove up housing costs for people renting even further west.”

Holmes said she works to address the different needs of the east and west sides of the ward, but works to bring the two communities together through ward meetings and newsletters.

“I try very hard to pull them together,” Holmes said. “I haven’t been able to do as much as I’d like to see them interact, but they don’t see themselves as two different units but … the physical barriers makes it almost impossible to not have that divide.”

The 5th Ward is one of Evanston’s only wards without a school. Foster School, which was on the west side, shut down in 1979 due to low enrollment numbers. Students in the area are now bussed to schools throughout Evanston.

City officials proposed building an elementary school at the same location six years ago, but the action was voted down due to lack of financial resources. Blades said the lack of a community school has created divisiveness in the ward.

“There’s still a lot of resentment among older people on the west side that their school got closed,” Blades said. “It kind of cut off our relationship too with the African-American community.”

Despite not having a school located within the ward, there are many educational initiatives that exist, including Family Focus and Youth & Opportunity United.

Seth Green, executive director of YOU, said his organization mainly focuses on students and young adults in Evanston through after-school programming, but it also works with parents and 5th Ward residents to create opportunities in the community. Creating a space where parents have financial security helps students succeed in school, and working with parents is key, Green said.

YOU does not have a physical location in the 5th Ward — the organization is in the process of constructing a new headquarters on the southern border of the ward at 1911 Church St., —
but works with residents and students through its in-school programs.

Green said YOU works with many 5th Ward students and families to remove barriers to success the students may encounter at home or in their communities.

“A lot of what we do is provide students with the resources they need to succeed,” Green said. “This means sometimes after-school programming, but it can also mean helping our students with mental health, violence and abuse in their lives. We’re making sure that we’re there for students.”

Holmes said this term would be her last — she plans to retire in 2017. She said she hopes to spend her final months on the council pushing for the same goals she has prioritized throughout her time as alderman: providing more affordable housing options, promoting economic development on the city’s west side and creating more opportunities for youth.

“I’ve had a lot of progress made during my time as alderman, but we’ve still got a long way to go to provide people all the resources they need,” Holmes said. “And even though things have improved, we have to keep going forward. We can’t stop here.”

Residents like Blades said the community is improving, but they recognize people outside of the 5th Ward still view the neighborhood negatively. The next step, Blades said, is changing people’s perceptions about the 5th Ward to meet reality.

“People only look at the bad things that are happening and don’t focus on what great things people are doing within the neighborhood to improve things,” Blades said.

An earlier version of this article misstated the location of schools in Evanston. The 5th Ward is not the only ward without a school. The Daily regrets the error.