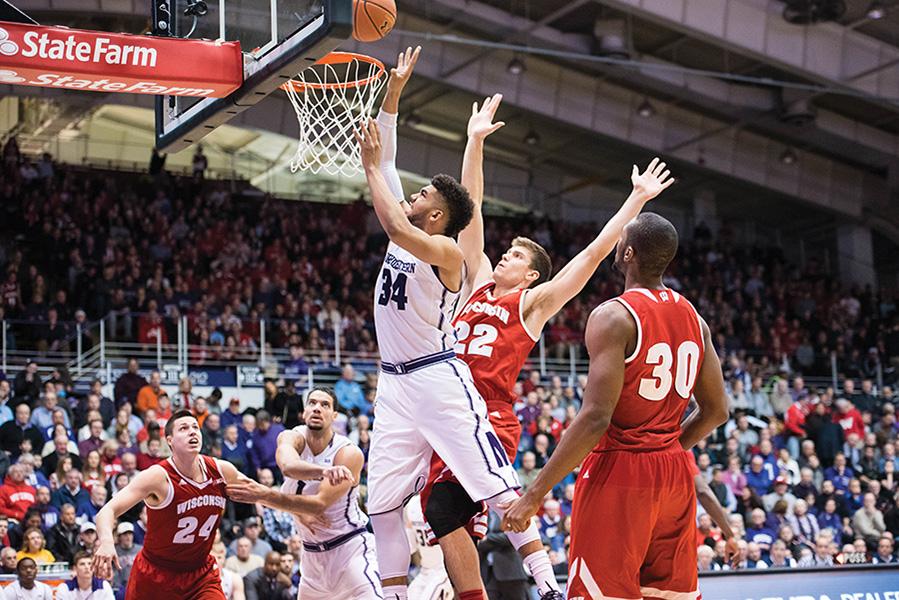 Sanjay Lumpkin ascends to the basket. The junior forward grew up playing multiple sports, but ultimately chose to pursue basketball in college.

On Jan. 9, a crowd of 10,436 at Williams Arena in Minneapolis watched Northwestern rout Minnesota. More than 70 of those spectators had their eyes on one specific player: No. 34 in purple, Sanjay Lumpkin.

And in front of dozens upon dozens of family and friends, the former Minneapolis prep school star and native of nearby Wayzata, Minnesota, pulled in a game-high 10 rebounds and hit one 3-pointer to help the Wildcats to a 77-52 victory.

Lumpkin’s performance that Saturday afternoon has proven emblematic of his role in this 2015-2016 NU squad: a difference-maker within the Cats’ complex defensive schemes, a strong rebounder and, as coach Chris Collins put it, the “heart and soul” of the team.

Yet despite starting all 21 games to date and leading the team in rebounding, Lumpkin averages just 4.7 points per game, attempts the fewest shots per minute of any player other than freshman walk-on Charlie Hall and is often half-forgotten underneath the chatter that surrounds playmakers Bryant McIntosh, Tre Demps and Alex Olah.

“The good thing I love about (him) is he understands who he is. Sometimes that’s tough for guys,” Collins said. “He’d love for me to design stuff to get him shots … but he knows that’s never been the case and that’s never going to be the case.”

From a young age, focus on defense has been an integral part of Sanjay Lumpkin.

He grew up around two former professional athletes, both defensive specialists in their own respective sports. His father, Sean Lumpkin, was a first-team All-Big Ten safety at Minnesota and a defensive back in the NFL for five years. His stepfather, Jim Petersen, spent eight seasons as a center and power forward in the NBA and currently is an assistant coach for the WNBA’s Minnesota Lynx.

During Lumpkin’s younger years, the pull to various different sports was strong. He played baseball and hockey, but fell in love with golf after Petersen introduced him to it at age 4.

“When he (only) worked for the Minnesota Timberwolves he had the summers off and we would always play,” Lumpkin said. “We played 18, 36 (holes) a day.”

However, as a high school freshman at Benilde-St. Margaret’s – his father’s alma mater and a school with alumni connections to the NFL, NBA and NHL – Lumpkin needed to commit to a single sport.

“I saw from day one that he was a really good defensive-minded player,” said Moore, noting that Lumpkin’s footwork when moving laterally made him a unique talent. “Defense was always who he was. Most people lead on the offensive end; he led on the defensive end. A lot of people are selfish on defense; he was a great team defender.”

By his senior year, Lumpkin found himself on a high school team sporting six players who would go on to play basketball in college (including longtime friend and now-Creighton starter Isaiah Zierden). The group rolled to a 27-2 record with Lumpkin dominating on both sides of the ball, scoring 19.5 points per game, leading the team in rebounds and finishing second in assists.

Nevertheless, Lumpkin came to Evanston the following autumn as a mere two-star prospect according to ESPN, the worst of NU’s four-member 2012 recruiting class. His first winter didn’t spell much promise either.

In his first collegiate practice, he was reaching for an offensive rebound when the forearm of Drew Crawford, then one of the team’s biggest stars, slammed him in the chest. Crawford got the board.

“That was his welcome to college,” said Crawford, who graduated in 2014 and now plays professionally in Israel. “Ever since then, he’s understood that it’s a strong and physical game in college.”

Lumpkin missed the first four games of the season with mononucleosis, recorded a total of four points and four rebounds in four appearances, and then was lost for the season with a broken wrist. While riding the bench, he bonded with the man who had so jarringly introduced him to Division I basketball – Crawford, who was nursing a torn right shoulder labrum at the time.

The Cats eventually sputtered to a 13-19 record that year. Bill Carmody, the coach who had recruited Lumpkin to NU, was replaced after the season by Collins. After missing the season, the forward returned as a redshirt freshman in 2013-14.

Lumpkin’s injury, combined with the coaching change, functioned as a reset button on his college career. After he fully recovered, Lumpkin lived with Crawford off the court and learned from him on it.

“It’s really easy to mentor a guy like (Sanjay) because he really soaks everything up and … he works extremely hard,” Crawford said. “You enjoy playing with, and enjoy leading, a guy like that. He’s willing to do everything in his power to help the team.”

Even as recently as last season, though, Lumpkin struggled to consistently find his place in NU’s lineup.

Up until Jan. 15, 2015, the forward was averaging 27.4 minutes and four shots per game; after that date, he averaged just 17.4 minutes and 1.8 attempts per game. By the time the Cats traveled to Minnesota the next month for Lumpkin’s annual homecoming game, he played just 15 minutes, hauled in just two rebounds and attempted just one shot: a miss.

“He’d worked on his game and probably wanted to do a little bit more,” Collins said. “I didn’t feel like last year he was as committed to being that dirty work guy. He and I had a lot of conversations about that.”

But this season, Lumpkin – now a team captain – and his gritty, defensive role have been inseparably espoused since the season’s opening tip-off.

Lumpkin has averaged just under 25 minutes per night for the Cats, establishing himself as arguably the most important piece of NU’s unusual zone-man hybrid defensive scheme. As a forward playing closer to the baseline, he’s not only responsible for covering his area of the court but also for communicating instructions to the guards farther upcourt.

“If you’re in one of those (forward) spots, you have to talk, because there are a lot of things that other guys can’t see behind them,” Lumpkin said. “We’re directing everyone and telling them where to go.”

In an odd twist of fate, Lumpkin has become the central figure in one of the most oft-mentioned statistics of NU’s season for, of all things, his offense: in games this season in which Lumpkin has made a 3-pointer, the Cats are 8-0.

His family reunion at Minnesota is one of those eight. The team’s visits to Virginia Tech and DePaul in December – when Lumpkin scored 12 and 14 points, respectively, helping the visitors pull out overtime wins in both – are as well.

Perhaps the time has come for Lumpkin’s role to expand offensively. But Collins isn’t convinced.

“His value is not ever gauged by his numbers,” Collins said. “He’s a lunchpail guy, he’s a dirty-work guy, he embraces it, he loves it, and because of that he’s carved out a nice niche for himself on our team and in our program.”