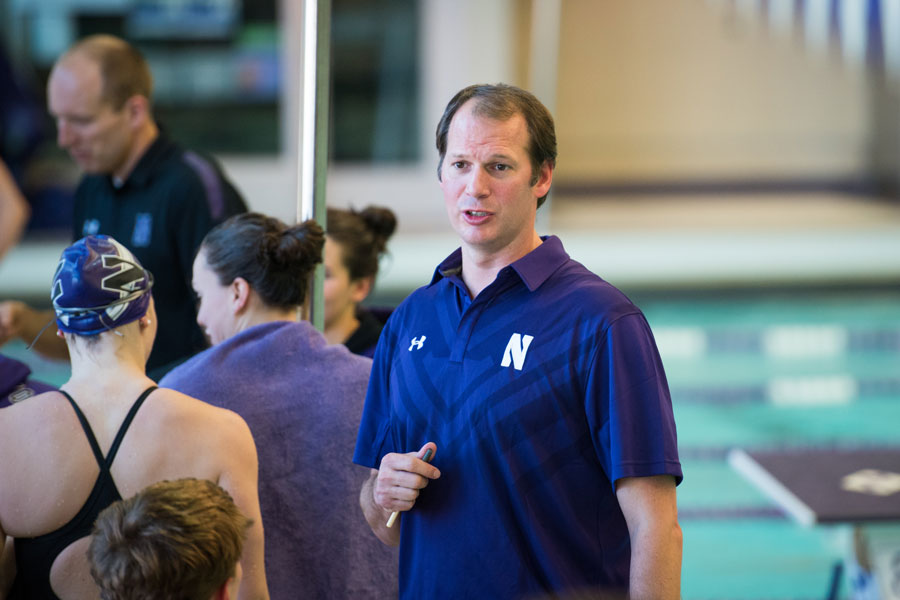 Coach Jarod Schroeder looks over toward his athletes. Schroeder has been leading the way for Northwestern since 2009 when he was promoted after serving as an assistant coach for a year. He said since he no longer competes in the water, coaching is now his competitive outlet. (Daniel Tian/Daily Senior Staffer)

Coach Jarod Schroeder looks over toward his athletes. Schroeder has been leading the way for Northwestern since 2009 when he was promoted after serving as an assistant coach for a year. He said since he no longer competes in the water, coaching is now his competitive outlet.

The Sideline: Jarod Schroeder and his love for a sport he once walked away from

Coach Jarod Schroeder’s eyes glisten when he talks about the sport he loves.

That love, however, started late.

Growing up, Schroeder, 43, did not intend to become a competitive swimmer. It was not until the summer before his freshman year of college, when his childhood swim coach encouraged him to take up racing again, that Schroeder began to think seriously about the sport. The two had kept in touch over the years because, as Schroeder describes it, his hometown of Morrison, Illinois, is a “little farming community where everyone knows everyone.”

“For some reason when he asked me if I wanted to swim again, I said yes,” Schroeder said. “I don’t know why, but that was a life-changing event for me. I was 17, and I got back into the sport.”

After adjusting to being in the water again, Schroeder decided he wanted to pursue the sport competitively. He approached the swim coach at Northern Illinois about being a walk-on.

Once he arrived at school, Schroeder met the new head coach, who asked him his times in the water. However, the freshman hadn’t swum competitively since he was 10 years old and was told he had two weeks to prove himself.

For those next two weeks Schroeder trained hard, showing up for practice every morning at 6 a.m., his competitive spirit driving him. It was there, at an optional practice one morning, when Schroeder beat a scholarship athlete in a race off the blocks and earned his place on the roster.

“I can’t imagine if my (childhood) club coach hadn’t asked me to swim that summer,” Schroeder said. “I can’t imagine if the coach at Northern Illinois didn’t give me the opportunity of those two weeks to prove myself. My life would be totally different right now.”

An athlete his entire life, Schroeder focused on football and basketball in high school. It was through participating in other sports and by being active that he found his work ethic and determination.

Schroeder also credits the techniques he learned when he swam competitively as a child for giving him a strong foundation to build from.

“I had some really great coaching when I was a young kid so all I had to do was get back into shape,” Schroeder said. “Because I was an athlete, I think I picked things up better than the kids who had just swum their entire lives. When my coach would tell me to do something I had good body awareness and could make that adjustment, so I improved very rapidly.”

For Schroeder, getting back into the sport provided him with a goal to work toward. The coach said it was there practicing in the pool day to day, playing wall tag back and forth for hours, where he was able to have quiet time with himself to just think and try to get better.

Schroeder found motivation when he was in the water that he didn’t experience from other sports, which kept his passion growing.

“What I loved about swimming was the challenges day to day,” he said. “You set goals for yourself and you try to achieve them in all sports. But in swimming, there’s a clock that’s ticking and you know whether or not you had success or failure every practice and every set. For me, I liked the challenge of every day going into the pool and trying to get better.”

During his four years at Northern Illinois, Schroeder set multiple school records as a team captain. After only a year of training he qualified for United States Nationals and after three years he qualified for Olympic Trials.

Schroeder made the U.S. team for the Goodwill Games in 1998. A year later, he earned a spot on the U.S. National Team and earned two silver medals for the United States during the 1999 Pan Am Games.

“I got lucky,” Schroeder said. “If I had gone to any other school, I don’t think I would’ve been given the opportunity. Northern Illinois wasn’t a powerhouse swimming program and that worked in my favor.”

Schroeder said the coaches at Northern Illinois gave him his appreciation of the sport and desire to pursue coaching as a career. He credits them as mentoring him on how to work with athletes both on and off the pool deck.

“He was an elite swimmer,” said Jonathan Blansfield, a sophomore on NU’s team. “His knowledge from being a swimmer has helped him become a better coach in the sense that he’s able to relate to us.”

Schroeder started coaching at Northwestern as a volunteer from 2000 to 2006. He left in 2007 to become interim head coach at Maryland before returning to NU as an assistant coach a year later.

In 2009, Schroeder was named the head coach for Northwestern, taking over for Bob Groseth, who retired after 20 years at NU. Schroeder credits Groseth for being a positive influence on his swimming and coaching style.

One swimmer Schroeder is especially proud of is Northwestern’s Jordan Wilimovsky, who won the FINA World Championship competition in Russia this past summer for the 10K open water race. The victory secured his star swimmer a spot on the Olympic team for next year.

“I went to three Olympic Trials and I never achieved my goal,” Schroeder said. “I have no regrets about that, but that was my goal. As a coach, my hope was to produce an Olympic athlete, so that was what was so special about what Jordan did this year.”

Schroeder describes Wilimovsky as humble and said that signing him to the program was like finding a diamond in the rough. Wilimovsky was not a highly scouted recruit and had to take a chance on Northwestern, because the Wildcats couldn’t offer a big scholarship at the time. Wilimovsky improved rapidly though, with Schroeder cheering and pushing him on the entire way.

Although Schroeder himself may never have reached the Olympics, having one of his athletes go satisfies a different but just as important goal, he said.

“I’m kind of living vicariously through my athlete now that he has reached the highest level of our sport and I had a little hand in that,” Schroeder said. “The athlete has the biggest hand in that because they’re the ones who have to work their butts off day in and day out, but I helped guide him towards that Olympic dream of his. To have a swimmer of mine be able to go, I think that’s a pretty special thing.”

“It’s not that he treated him special or anything, but he knew what was at stake and he gave him what he needed when he didn’t have to do that,” Donkersgoed said. “He believed in Jordan.”

Schroeder has always taken coaching seriously, but said he’s recently tried to take a step back and be less intense. He said he thinks he’s mellowed out over the past few years, but admits that if you asked his athletes, they’ll probably say he still gets more stressed than he needs to.

Donkersgoed said Schroeder jokes with his athletes to lighten the mood and show he sees them as people, not just swimmers.

The athletes Schroeder coaches get to see both sides of the man that they spend hours working with both in and out of the water.

“I really enjoy swimming under him,” Blansfield said. “He knows how to get the best out of his swimmers. He’s tough and he demands a lot, but it’s only because he wants to see us succeed.”

“As an athlete I had an awesome journey but I didn’t get to where I wanted to go,” Schroeder said. “But if the path that you’re taking is a worthwhile experience, then even if you don’t achieve the highest goal that you have for yourself, still, you had a good run, you had a great voyage so to speak.”

Whether through swimming competitively or coaching, Schroeder said that he has been constantly learning from the sport over the years.

“I’ve learned to kind of take things in stride a little bit better and to roll with the punches,” he said. “I’ve learned you have to enjoy it while you got it.”

On Schroeder’s desk is a picture of his wife, Liz, and his two children Tate, 7, and Turner, 4. His family often comes to swim meets to cheer on the team and their favorite coach.

Though his children are enrolled in swimming lessons, Schroeder doesn’t think he’ll coach them competitively any time soon.

“The great thing about when I was swimming was that my parents knew nothing about the sport,” Schroeder said with a knowing smile. “It might be harder on my kids because I love swimming so much. I don’t know if I want them to have to deal with me.”