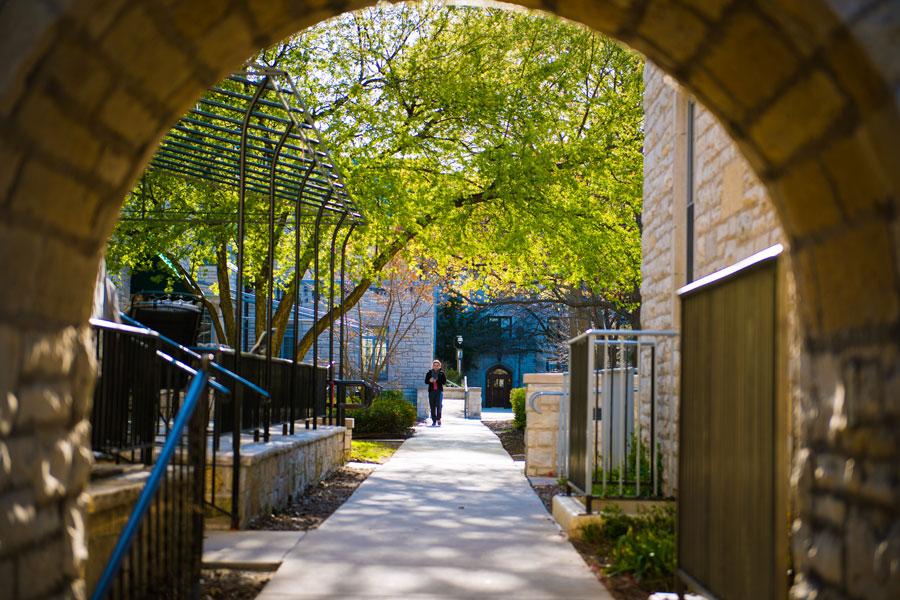 In Focus: A bid for diversity

When Fei Wang went through recruitment two years ago, she was not sure she would be accepted as a lesbian, first-generation Chinese immigrant. Today, the Weinberg junior serves as the first-ever campus inclusion and community chair for her sorority.

“Having the position itself opens up room for conversation,” said Wang, a member of Kappa Delta. “It’s an overall push for change and to change the status quo of a very inherently exclusive community.”

Wang’s position is part of a movement within Northwestern Panhellenic Association that established diversity and inclusion roles in each chapter. These roles were introduced Fall Quarter of last year, with all 12 PHA chapters filling the positions by the middle of Spring Quarter 2015, said Medill senior KK Doyle, PHA president.

The push to improve diversity and inclusion arose last fall when the “Jail N’ Bail” philanthropy event hosted by Kappa Kappa Gamma sorority and Zeta Beta Tau fraternity was canceled after student backlash. Some students thought the event’s simulation of a jail with students as prisoners made light of systemic criminal justice issues affecting minorities.

After then-PHA president Frances Fu released initial plans for diversity and inclusion chairs, Doyle took the helm of the new diversity initiatives as the next president.

Now, PHA’s executive board is installing a new position, too. Named the vice president of outreach and engagement, this student will act as a liaison between PHA and the chapters’ diversity and inclusion chairs, Doyle said. The PHA executive board will choose the first person for the new role on Thursday, along with the rest of its successors, who will officially take over at the end of January.

Last winter, the Interfraternity Council created a similar position. Unlike PHA, there is no mandated diversity chair for each IFC chapter, although the executive board has been overseeing inclusion efforts, IFC president Mark Nelson said.

“It’s a discussion going on with every single chapter,” the Weinberg senior said. “We’ve been very critical about everything we’ve done. … Conversations have been more geared toward actual values and challenging the status quo.”

But inclusion in Greek life comes with long-standing challenges. Greek leaders looking to redefine their communities face demographic disparities and skepticism from students of color who see the Greek system’s history as inherently tied to exclusion.

Sienna Parker said when she went through PHA recruitment last winter, her braids made her “look a lot more African-American.” As a half-Filipina, half-black woman entering what she called a traditionally white space, she was conscious of the racial representation in each sorority.

“My most salient identity is my race,” the SESP sophomore said. “Going into a house I’m thinking, are there people who look like me? … If I spend this much time with them I want someone who can relate to me racially and ethnically.”

The racial makeup of PHA and IFC was 71 percent white after Winter Quarter 2014 recruitment, according to a Student Affairs assessment obtained by The Daily. A year later, that demographic has shifted to 68 percent.

The Winter 2015 Student Affairs assessment also shows that the percentage of Hispanic and international students in IFC and PHA chapters grew by 1 percent each. The percentage of Asian/Pacific Islander students, who make up 10 percent of the PHA and IFC population, and Black students, who represent 2 percent, did not change from the previous year.

Parker, now on Gamma Phi Beta’s first diversity and inclusion committee, said that for Greek life to change, people need to talk about its diversity issues.

“For people who are marginalized within Greek life, it’s hard to stay in it,” Parker said. “It’s definitely a long-term process and I think awareness is a first step.”

Cynthia Rose, director of the Office of Fraternity and Sorority Life, declined to comment on Wednesday.

Some students say traditional fraternities and sororities cannot escape the effects of their past exclusion of minorities.

“There’s so many historical roots here that are never going away,” said a Weinberg senior who deactivated from a PHA sorority last year. “Greek organizations are founded on old money and continued and propagated by rich white people. … It’s not a Northwestern problem. It’s a national problem.”

The senior, an Asian woman who asked not to be named to avoid targeting her former chapter, said as NU attempts to diversify its chapters, nationally, sororities and fraternities will remain tied to their histories. 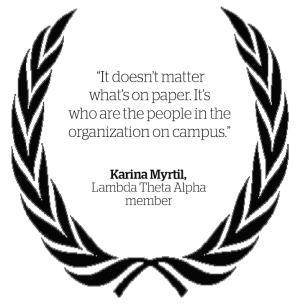 “Most (Greek organizations) were founded when black people were not considered human,” said Medill junior Karina Myrtil, who is half-black, half-white and a member of Latina-interest sorority Lambda Theta Alpha. “Historically they exclude people who are not like them and that will always follow them around. … More than 100 years have passed and there hasn’t been any change.”

In 1961, the University passed a non-discrimination policy prohibiting NU fraternities from refusing to select members because of race, religion or ethnic origin. However, Myrtil said even today, changes in a Greek organization’s constitution will not make a difference.

“It doesn’t matter what’s on paper,” she said. “It’s who are the people in the organization on campus, who are the bodies.”

Wang said despite her reservations during recruitment two years ago, her sorority has become a place where she feels comfortable with her identity. She said she wants her new position to allow other people’s voices to be heard, too.

“I lived a lot of my life … being concerned with how people weren’t going to accept me if they found out who I really was,” she said. “Being able to take a girl to formal and show affection — I think that’s so important personally. It’s a validation of my identity and my existence.”

The topic of identity is also on PHA’s radar. PHA formal recruitment involves many conversations between sorority members and potential new members, and Doyle said next quarter she hopes to foster an atmosphere that allows more personal discussion throughout the process.

PHA will meet with recruitment counselors next month to train them on how to approach identity in conversations, Doyle said.

In prioritizing identity, Parker said she wants to dispel the idea that recruitment conversations should not include the “Five B’s”: boys, booze, Barack, the Bible and bills. Women on both sides of recruitment were traditionally discouraged from discussing potentially controversial issues, like sex, religion, politics, alcohol and money.

“A lot of those have to do with people’s identities,” she said. “‘Bills’ is your socioeconomic status. Instead of shoving it under the rug and ignoring it, we should respond to it.”

Nelson said IFC chapters are pursuing diversity and inclusion initiatives through community service events with student groups outside of Greek life. Traditionally, IFC fraternities team up with PHA sororities for such events.

“One of the raps in Greek life is it’s very exclusive,” he said. “Our goal is to make the atmosphere of IFC more inclusive in general.” 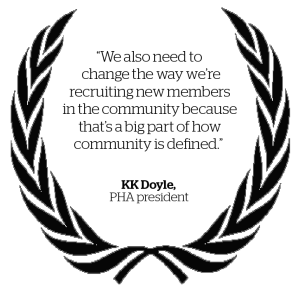 Socioeconomic diversity also remains an ongoing effort for both councils. Nelson said IFC launched a fundraiser selling apparel throughout this quarter that has generated about $500 in scholarships for its members. Last Winter Quarter, PHA allocated about $6,000 more in scholarships following 2015 recruitment, PHA vice president of administration Kathy Hong said.

“I don’t think (finances) should be a reason for anybody if (Greek life) is something they want to do,” the SESP and Bienen senior said. “Currently that’s what the case is and I don’t want it to be.”

However, PHA ultimately cannot control the national dues set by each individual sorority — an obstacle some of NU’s chapters are addressing. Last Spring Quarter, Wang worked with two other members of her sorority to launch a scholarship fundraiser for financial aid for dues, raising $2,330.

Hong said she has more fundraising initiatives in the works before her term ends in January.

Although the anonymous Weinberg senior said she does not regret the friends she made through Greek life, ultimately she felt uncomfortable in her chapter. She said during her three years of affiliation, some members of her sorority confused students of color and mocked ethnic-sounding names.

“You’re my sister but you’re literally laughing at a name that could be my mom’s or my sister’s,” she said. “Compared to other sororities, we were more diverse — but we still weren’t.”

The Weinberg senior said Greek life isn’t the cause of such problems, but it attracts people who aren’t open to conversations about race and inequality. The daily lunches in her sorority house took a toll on her, she said, and were one of the reasons she deactivated at the end of last year.

“I didn’t feel like I had it in me to literally bring up hotbed issues that are very personal to me and explain myself and defend myself,” she said. “To be a person of color and prove that racism exists is one of the most debasing, exhausting experiences.”

Myrtil, who knew arriving at NU as a freshman that she wanted to be in a sorority, said multicultural Greek organizations were ultimately founded because there wasn’t a space for women of color in traditional sororities, she said.

“We have that baseline of what we all know what it feels like to not have white skin,” she said. “That humbles a person.”

Myrtil said she did not want to become a PHA sorority’s “token minority,” a phrase used to describe a minority person added to a group for the appearance of diversity.

“I’m not a thin, white blonde girl,” Myrtil said. “I didn’t see many other people that didn’t fit that category so I felt like I was going to be the token black girl, the token black sister.”

In about two months, Doyle, Nelson and Hong will be reaching the end of their terms. Many of the initial diversity and inclusion chairs from last year will also be replaced in the coming months.

“I came into this and I understood (diversity and inclusion) was something I wanted to focus on,” Doyle said. “I’ll have a very culminating moment when the new board is elected and seeing people in those positions.”

Next quarter, the new vice president of outreach and engagement will take on much of the work Doyle did this past year in diversity and inclusion, she said.

Andy Linder, a Medill senior who served in IFC’s counterpart role of vice president of community engagement for the past two quarters, was tasked with building a relationship between IFC and other communities within NU and Evanston. This month, IFC is partnering with Relay for Life in a “No Shave November” fundraiser, which involves participants donating money and pledging to not shave their face for a month.

“Community service has become a much bigger part of the fraternity experience,” Linder said. “We’re not just IFC and PHA working together. We want to expand into the other two councils and the greater Northwestern community.” 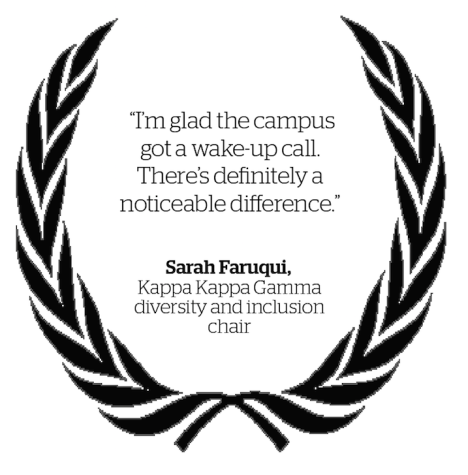 “I’m glad the campus got a wake-up call,” said the Weinberg sophomore, who is an international student. “There’s definitely a noticeable difference for sure. I think campus-wide, everyone is definitely more cautious about what they’re doing.”

Nelson said his vision of diversity and inclusion translates into an IFC community that is welcoming regardless of racial and financial background. That goal is a work in progress, he said, but it has moved forward since last year’s Jail N’ Bail incident.

“It’s sad that something so dramatic has to happen to open people’s eyes,” he said. “We’re much more aware. … We’re always thinking about new ways and how to make our community more inclusive.”

Doyle said there is room for improvement, but she is proud of the community surrounding her.

“That’s Northwestern, right?” she said. “We’re never comfortable. It’s one of the reasons I love the campus, the student body. We’re not complacent, comfortable people and so there’s always so much room to do more.”