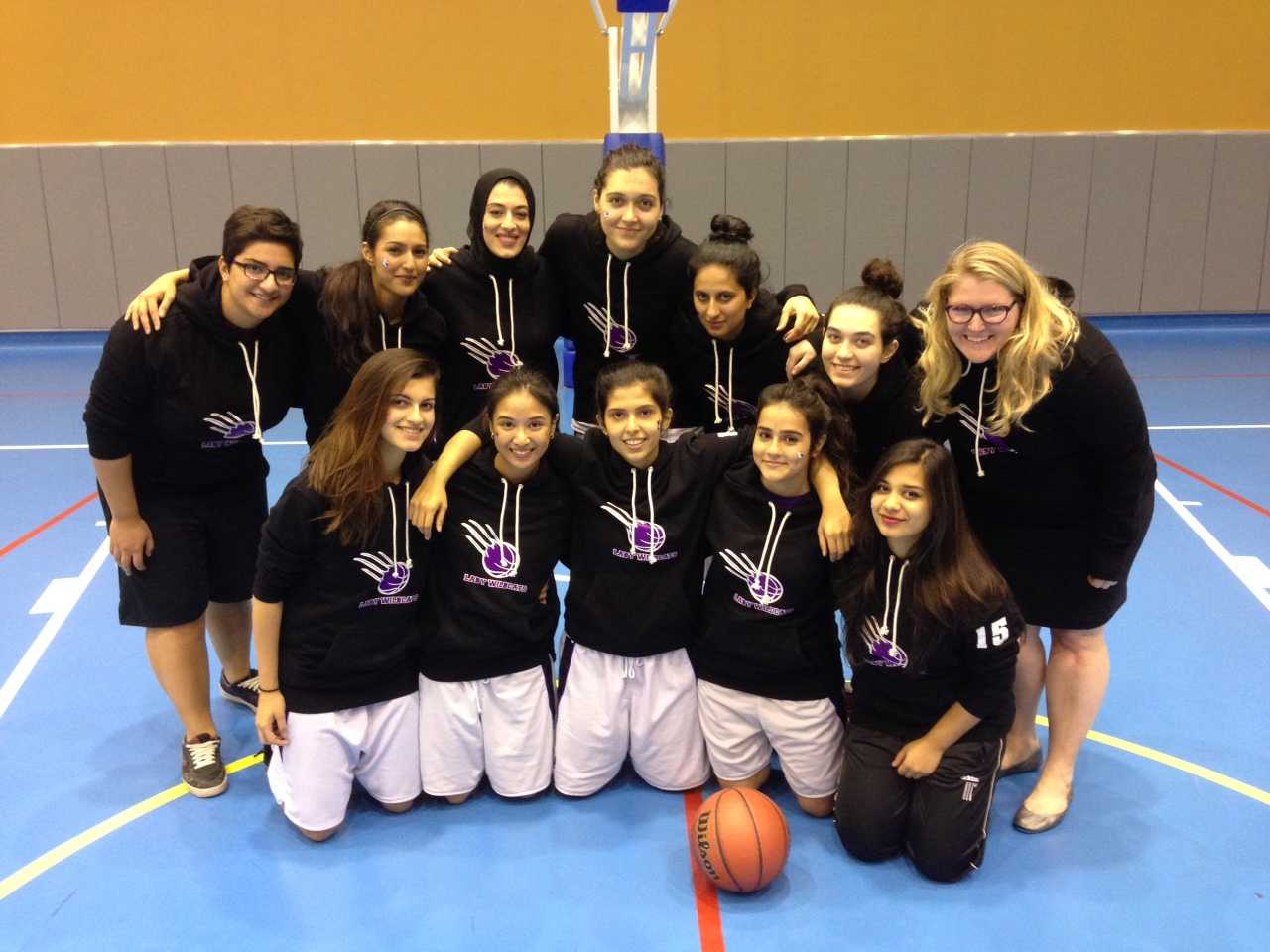 The 2014-15 NU-Qatar team poses for a team photo. The Wildcats defeated Cornell in the championship game to win this year’s league title. (Source: Emily Wilson)

The 2014-15 NU-Qatar team poses for a team photo. The Wildcats defeated Cornell in the championship game to win this year’s league title.

The diversity on the court is unmistakable.

There are Qatari, Lebanese, Bulgarian, Indian, Filipino and Jordanian citizens — and that’s only on one team.

It doesn’t take 20-20 vision to notice.  The uniforms aren’t uniform. Some of the girls could fit right in with any American basketball team. Others wear long sleeve shirts under their jerseys, pants and a hijab.

On the basketball courts of Education City, respect is most important. Players can express themselves however they feel most comfortable.

It doesn’t matter what an athlete has to wear to play basketball — she’ll do it. Love of the game comes first.

For Northwestern University in Qatar, that love has translated to success. The Wildcats have won two Hamad Bin Khalifa University (HBKU) Basketball League titles in three years, including this season.

“We always have a talk at the beginning of the year,” Emily Wilson, manager for community relations at NU-Q and coach of the women’s basketball team, said, “and we say ‘There’s a lot of diversity on this team, but when you walk into this practice, you’re a team. You’re a family. You work together.’”

Even as the newest addition to the intercollegiate league, joining in 2009-10, NU-Q’s women’s basketball team has immediately become the team to beat, finishing in the top three each season.

“Northwestern University in Qatar has been breaking new ground in many areas of academics and research,” University President Morton Schapiro said in an email to The Daily, “so it’s also very encouraging to see the success of the Wildcat women’s basketball program there. College sports provide a unifying experience for both those who participate and for those who attend games and follow the teams. It’s exciting to see that happening on our campus in Doha as well as here in Evanston.”

But the journey to the top has been distinct from Evanston. The team faces unique cultural barriers, encounters and triumphs unmatched in America. The pride the Cats bring to their campus, however, rings familiar.

The culture of college sports in Qatar is different than in America. The HBKU Basketball League is not the NCAA. After all, there are only nine schools in Education City — a relatively new endeavor of the Qatar Foundation for Education, Science and Community Development.

Since 1998, eight international universities and 2,500 students have been invited to Education City — a 3,000 acre plot of land — as part of a grand strategy for the country, NU-Q Dean Everette E. Dennis said. The goal, Dennis said, is to promote economic, social, human and environmental development through education and to promote Qatar on the world stage.

With a strong education system in place, Qatar hopes to instill an advanced economy when its oil runs out.

Sports are integral to becoming a larger part of the global community. Because Qatar sits on the third largest reserve of natural gas in the world, it can afford to bring high profile sporting events to the country — including, to much controversy, the 2022 FIFA World Cup.

Naturally, intercollegiate athletics have followed the simultaneous import of Western education and increasing prominence of sports. Although soccer is the most common sport in the country, basketball has become surprisingly popular.

After all, it’s too hot for about half the year to play sports outdoors.

After going undefeated and winning the league two years ago, NU struggled last season and placed third. The Cats couldn’t bounce back from the loss of the graduated senior class, including star and 2013 Most Valuable Player Dana Atrach.

But this season, Atrach returned as a coach. She joined Wilson and a roster composed almost entirely of returning players to lead NU back to victory.

“Having two coaches is so much better than one because you can split them up and really give them individual time and focus,” Wilson said.

A key difference between Qatari and American basketball is experience. Unlike in America where athletes are scouted from middle school, a significant chunk of NU-Q’s roster had never played basketball before coming to the school.

That’s why the team starts with basics each season — serious basics. Before moving onto anything more advanced, the Cats work on the fundamentals: dribbling, passing and shooting.

“Some of the things we really needed to work on were coming together and learning what it actually means to play basketball in terms of like strategy and what the sport meant,” Atrach said, “Teamwork more than anything helped them pull through any rough patches.”

After starting out 7-0, NU dropped a heartbreaking 1-point loss to Cornell in double overtime in the final game of the regular season. But it made the Cats even hungrier.

Having already faced the Big Red, the Cats devised a winning strategy, working on their defense down low and making sure not to foul out.

With the necessary adjustments made, NU team won the rematch against Cornell in the title game and claimed the championship.

“To have all your hard work pay off is one of the best feelings in the world,” senior captain Maha Al-Ansari said.

There are only about 278,000 Qatari citizens. But with such a large reserve of natural gas, that’s not enough to fully capitalize on the business opportunities the land creates. As a result, around 88 percent of the population in Qatar of more than 2 million is international, not Qatari.

Likewise, only 40 percent of the 200 students at NU-Q are Qatari, with the rest coming from 30 different countries, Dennis said.

“On the court, nationality and culture — none of that matters,” Al-Ansari said. “But you’re not only a team on the court, you’re a team off the court. I learned a lot from the different cultures of my teammates.”

And as a group, the Cats have overcome gender barriers female athletes face in the Middle East. In general, the university system has created more opportunities for women in sports.

“Before, for women and girls in Qatar and the Middle East generally, playing sports of any kind was really not done,” Dennis said. “Physical exercise was not encouraged and sports activities were, if not completely discouraged, definitely not encouraged.”

“A lot of people in Qatar, especially Qataris, think that female participation in sports — it’s a bit of a taboo topic,” she said. “Not because of anything, but because — when the audience is male and we’re wearing shorts, and then Islam comes into play, and some people think it’s not okay.”

While teaching at NU-Q from 2010-13, Geoff Harkness, currently an assistant professor at Morningside College, conducted a study called “Out of Bounds: Cultural Barriers to Female Sports Participation in Qatar.”

He found a number of hurdles to female participation in sports in Qatar, even with government encouragement. These include cultural pressures, societal expectations, reputational worries for families and religious concerns.

In his research, Harkness observed that the women least likely to participate in sports were Qatari. International female athletes in Qatar were far more common, meaning even if sports served as a melting pot of different cultures, Qatari women were less exposed to this engagement.

Nonetheless, Harkness said he does think sports are a contributing catalyst to greater gender equality.

“Sports is one place where you’re seeing women defying the old way of things,” Harkness said, “Education is another. Universities give legitimacy to the sports. It might not be acceptable for women to play sports on the local basketball court down the street or join the local sport, but if they’re doing it for school, their parents might be OK with that.”

And Harkness’ findings from a few years ago on Qatari women might already be outdated. Whereas Al-Ansari was the only Qatari player on the team last season, there were four this year, Wilson said.

“I’ve seen a change in the Qatari community around me,” Al-Ansari said. “With a lot of other schools in Qatar, girls aren’t as lucky because they don’t really get the opportunities that we get in international schools.”

On top of that, Qatari students make up a large bloc of the support the team gets at games, Wilson said. The events serve as major social gatherings for the small student body, particularly locals in the largely commuter school.

There’s no systematic gender segregation in Qatar like in neighboring Saudi Arabia, nor is there enforcement of religious norms regarding gender. Qatar may be a relatively conservative society, but veiling and attire in general depend on personal preferences, and no religious police monitors clothing, said Henri Lauzière, a history professor at NU in Evanston studying the modern Middle East and North Africa.

Harkness, who followed his study on female sports participation in Qatar with similar research in Iraq, specified that the Middle East is not a monoculture, as did Al-Ansari.

The HBKU Basketball League might not be the Big Ten, but the NU-Q women’s basketball players sure are Wildcats.

“We’re very much attached to the bigger Wildcat identity,” Al-Ansari said. “We take a lot of pride in being all one Wildcat family.”

And the Evanston campus has recognized their achievement, too. Schapiro sent the team a plaque after they won the league.

The similarities to America don’t end there.

One of the reasons sports are being encouraged in Qatar, Wilson said, is that, similar to the U.S., there’s fear of a looming health crisis. More and more, people are overweight and inactive. The government push for increased sports is in part to increase general wellness, she said.

Wilson said her main priority is to give students an outlet to be healthy and active.

At the more local level, though, comes the Wildcat pride.

“It’s so interesting to see how you can take the spirit of a school,” Wilson said, “and how you can make people a part of something from so far away.”

And just like in Evanston, much of the learning comes outside the classroom.

“I learned more from my collegiate experience on the basketball team than I did in any other club, organization, or class that I took,” Al-Ansari said. “I learned so much about teamwork, and how to work with other people to achieve a certain goal.”

The love for the team shows in the players not wanting to give it up. Just as Atrach stayed on to coach after graduating, Al-Ansari will now remain as a coach.

The challenge ahead won’t be easy. Next season eerily resembles two years ago when many of the key players graduated. This time the Cats hope to bounce back stronger — by starting with the basics. Al-Ansari said when the team struggled, it started at too high a level for the team’s new members, many of whom had little experience with basketball. Now the rebuild will be done right.

But, junior captain Jemina Legaspi said, the experience is more important than winning.

“NU-Q’s women’s basketball team is like my family,” Legaspi said. “It’s one of the best experiences I’ve ever had.”

Correction: A previous version of this story mischaracterized this year’s roster. The team is composed almost entirely of returning players. The Daily regrets the error.