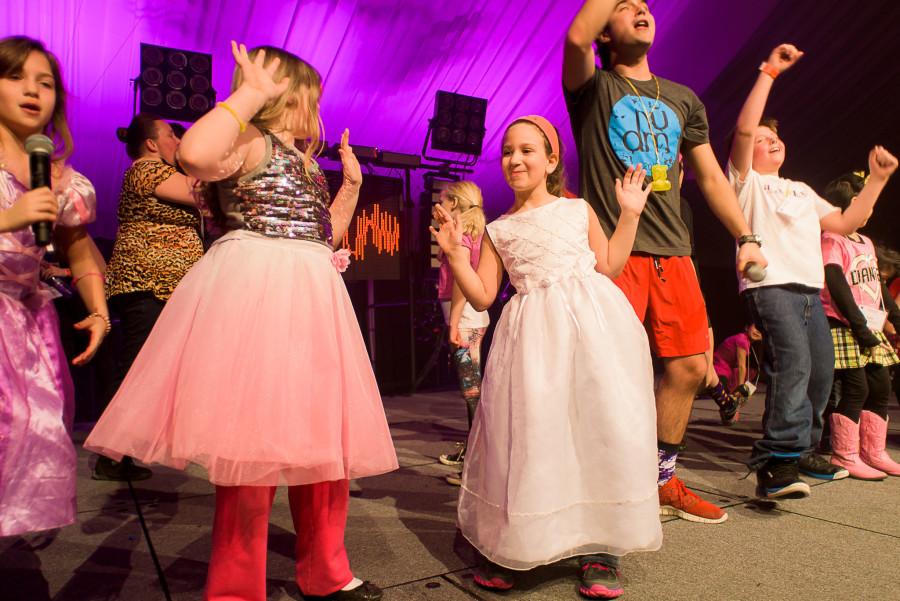 Committee members lined the walls as hundreds of Northwestern students ran into the large white tent behind the Norris University Center to kick off the 41st Dance Marathon.

Energy was high in the tent as Pitbull’s “Time of Our Lives” began to blast, and participants started to dance for 30 hours to a playlist of mostly Top 40 songs. Each dancer committed to raise at least $400 before entering the tent. The money raised will support the Starlight Children’s Foundation Midwest, which benefits chronically ill children, and the Evanston Community Foundation. 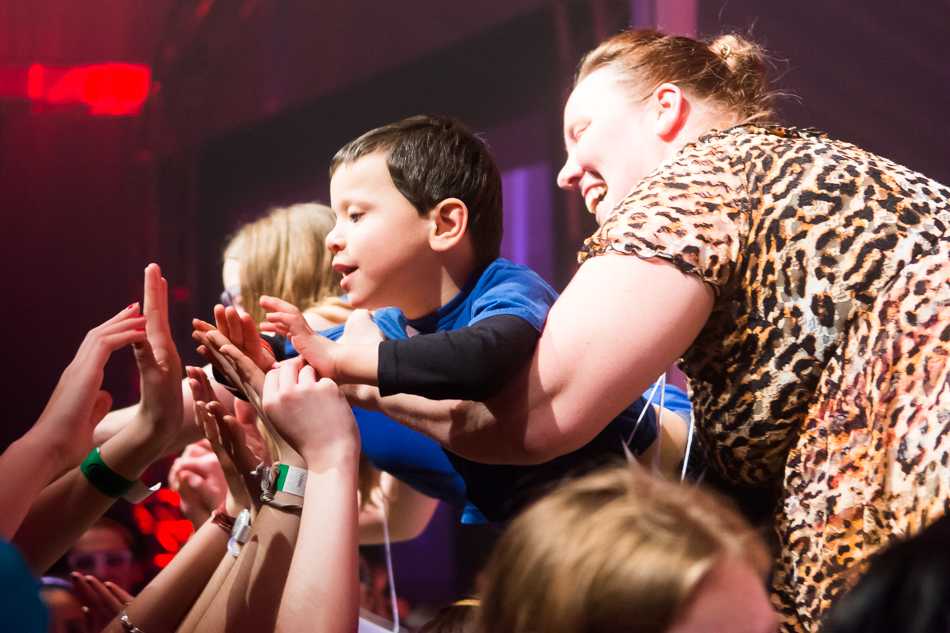 For some dancers on Friday, injuries weren’t even enough to sideline them. SESP senior Linzy Wagner has a concussion, but she did not want to miss her final DM. She has participated in every DM since she was a freshman and felt she could not miss her last one. She will dance in both Block 1 and Block 10.

“I’ve always loved it,” she said. “Since freshman year when I saw the seniors in the 120 Hour Club, I knew I wanted to be like them.”

Even though she won’t be at the entire event this year, she plans to keep the livestream playing in the background as she can’t look at screens. 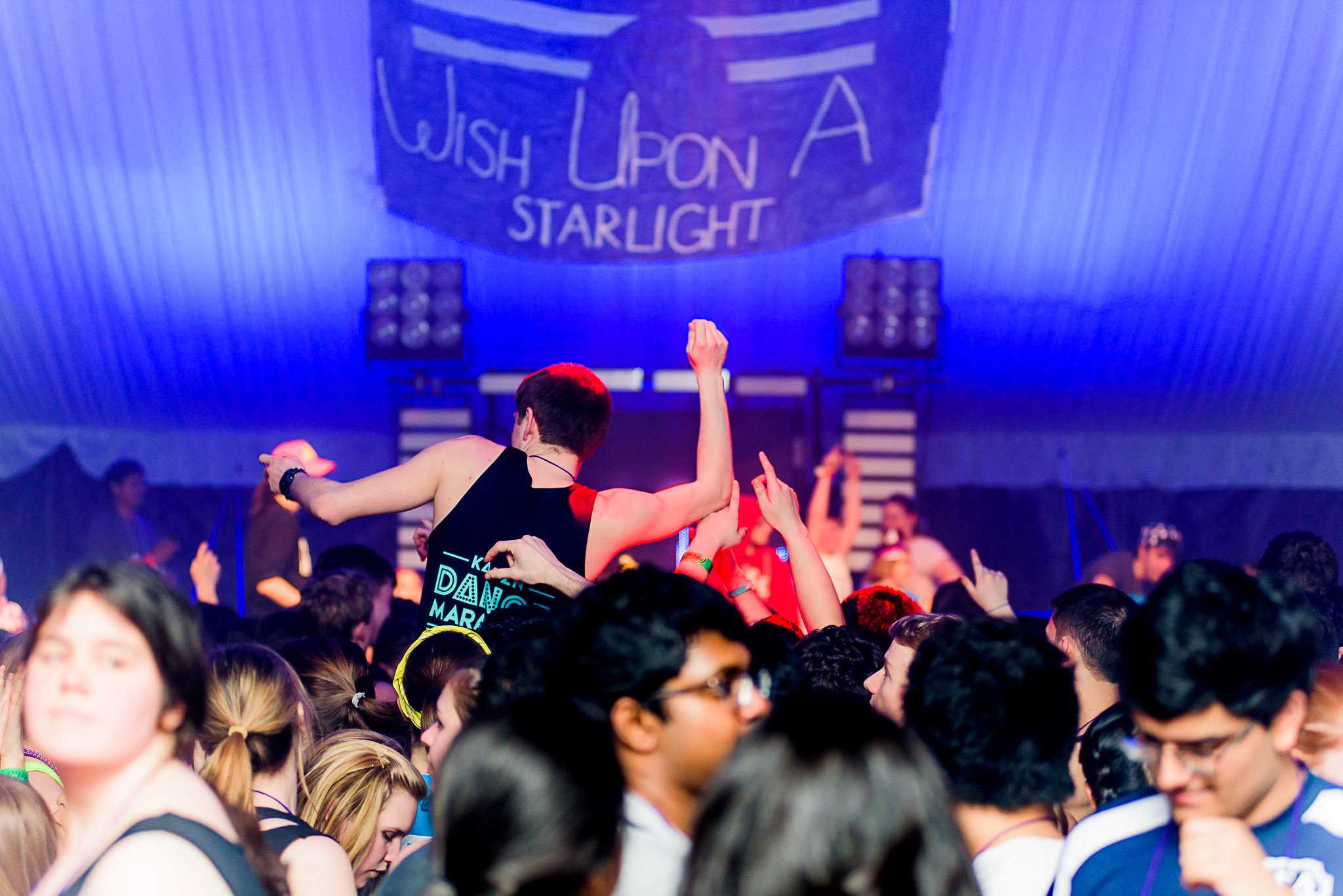 Weinberg freshman Clark Skillman tore his anterior cruciate ligament, but he still is dancing for all 30 hours on crutches. He said he’s been working on dance moves that only require his upper body, including one he calls “giving CPR.”

“I raised all the money to do it, so I thought I should do it,” he said.

About an hour into the block children from DM’s Hero Program took the stage, drawing cheers from the dancers. A record number of families signed on to the Hero Program this year. 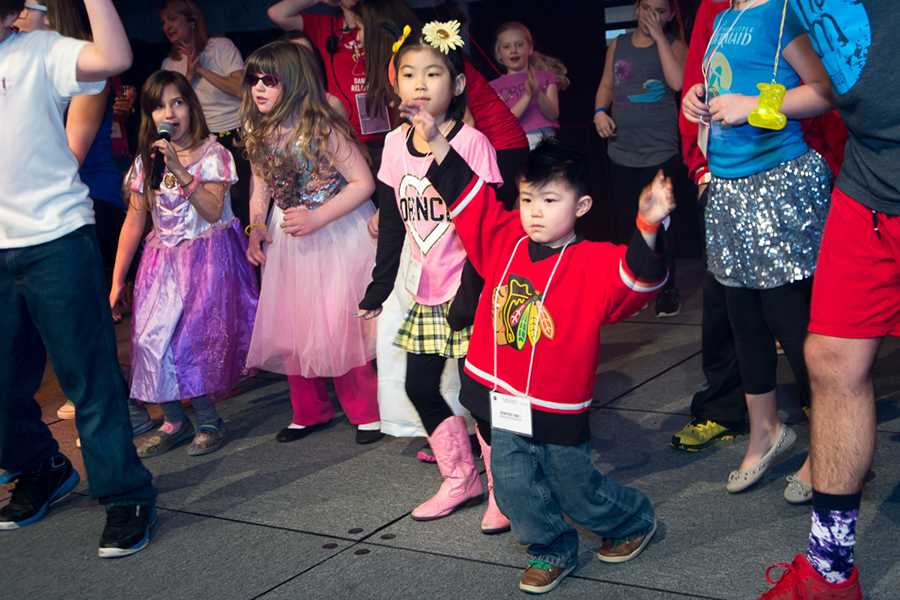 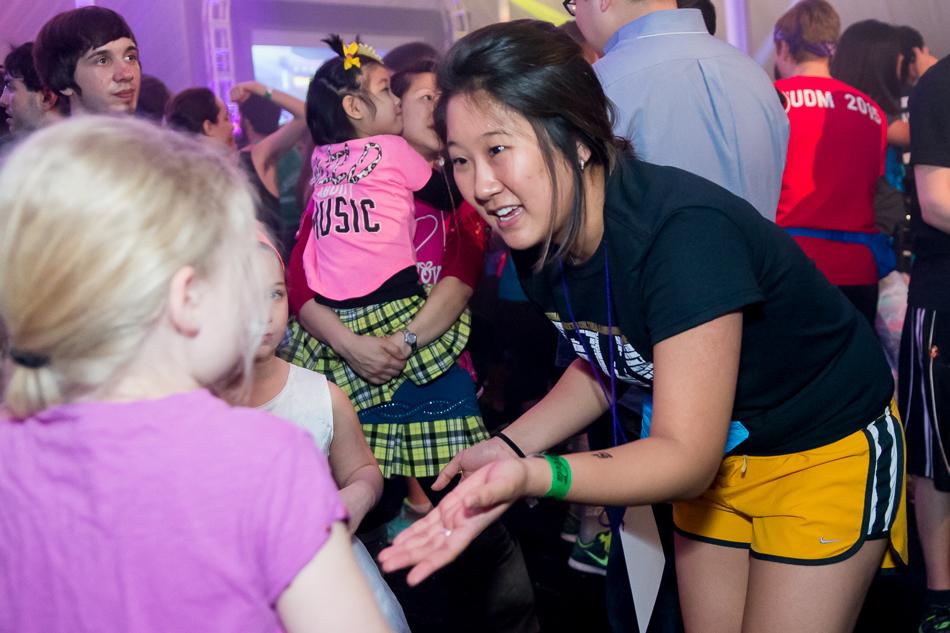 Block 1 brought the first celebrity video, which featured cast members of the hit show “American Horror Story” encouraging the dancers. Dancers also began to learn the moves of the annual dance, which this year is choreographed to Mark Ronson’s “Uptown Funk.” 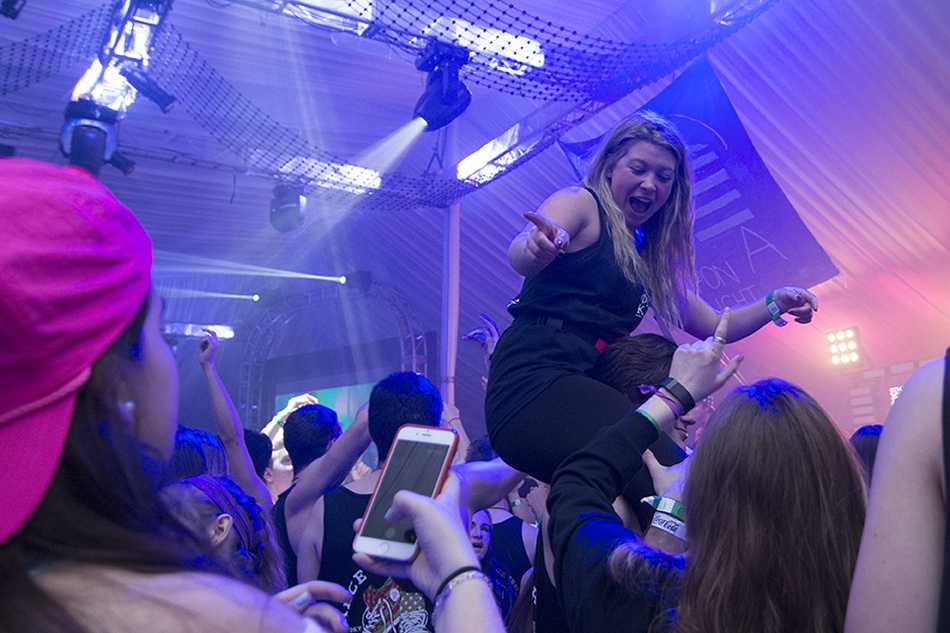 Gender neutral restrooms were also available for the first time.

But for veteran dancers, the “same old good vibes” were present during Block 1. Michelle Reisin was participating in DM for the third time on the Delta Gamma/Zeta Beta Tau team, which this year includes Alpha Iota Omicron. The Weinberg junior said there are few other events like it on campus.

“It brings everyone together to fight for the same cause,” she said. “It’s just an unbelievable night.”

She was most looking forward to Block 10, when she said everyone would be high on adrenaline. 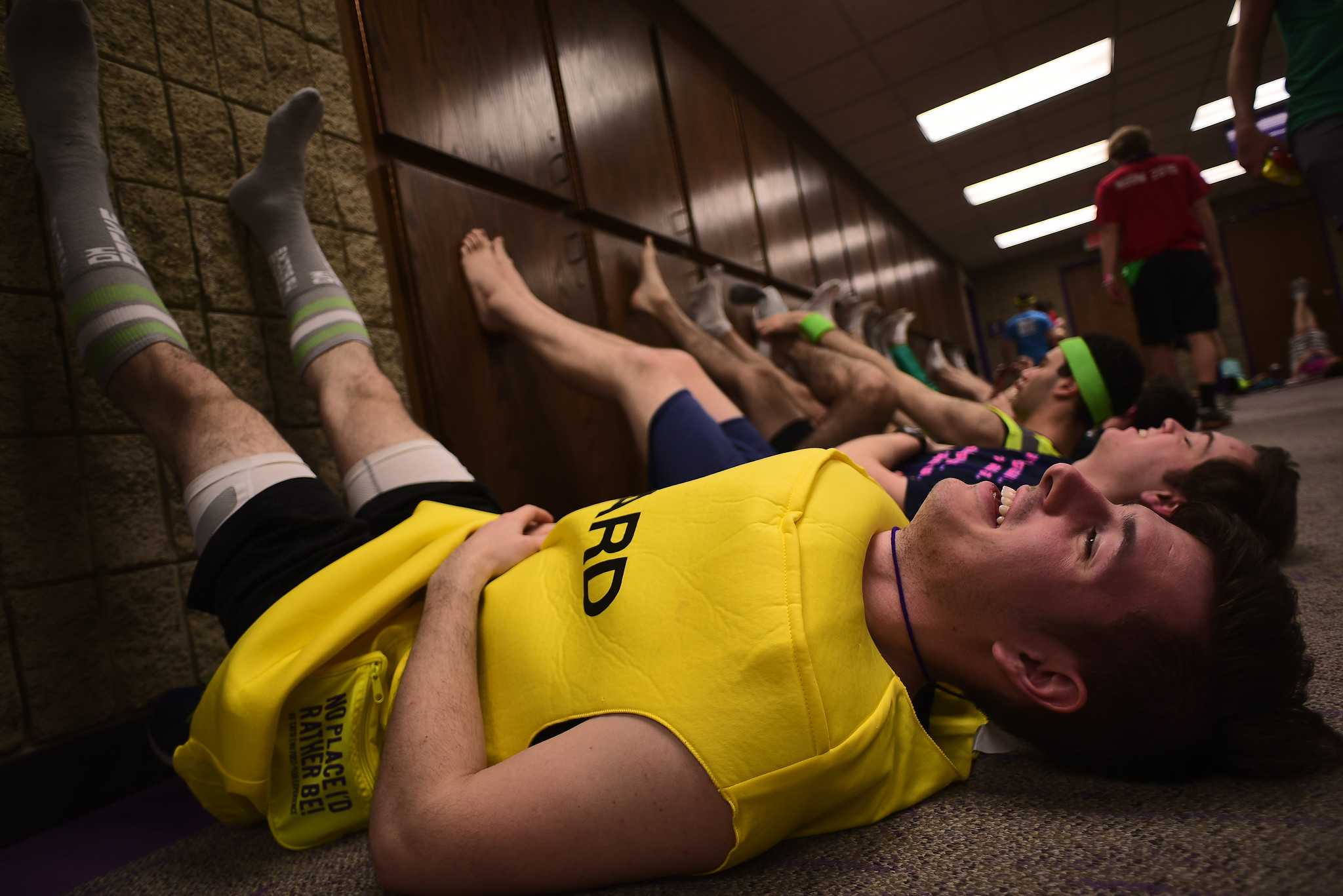 Several freshmen said they were nervous about maintaining stamina through the whole event, the length of which hadn’t sunk in yet.

“I know everyone makes it so I have to, but that’s the only thing that makes me believe it,” said Weinberg freshman Samantha Schmidt, dancing with Communications Residential College. 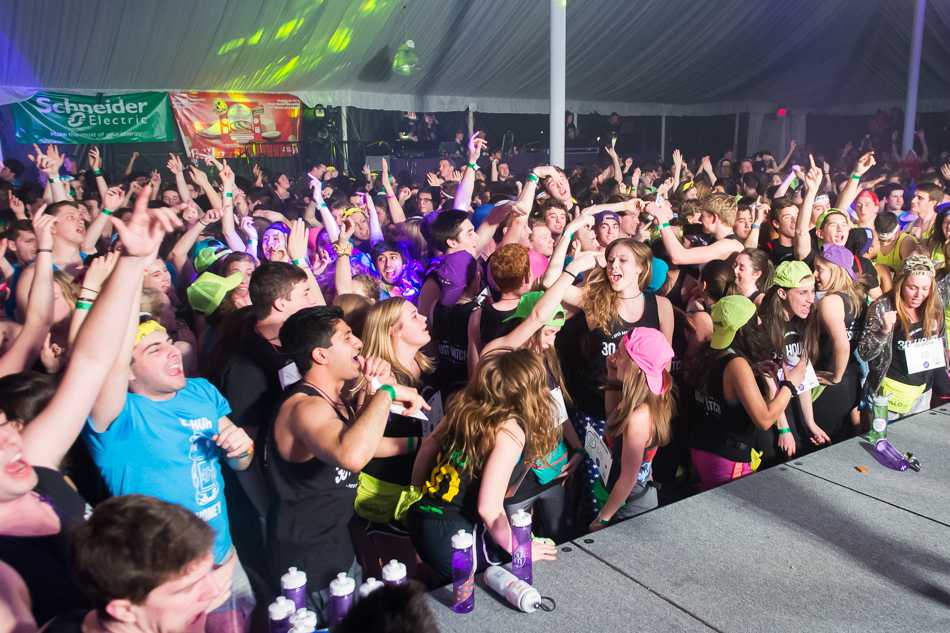 Communication freshman Sam Riese crowd-surfed for “about 10 seconds” in the first half of the block and said he was excited for people to “actually start dancing.”

“Everyone’s getting ready to dance, they just need to start,” he said.