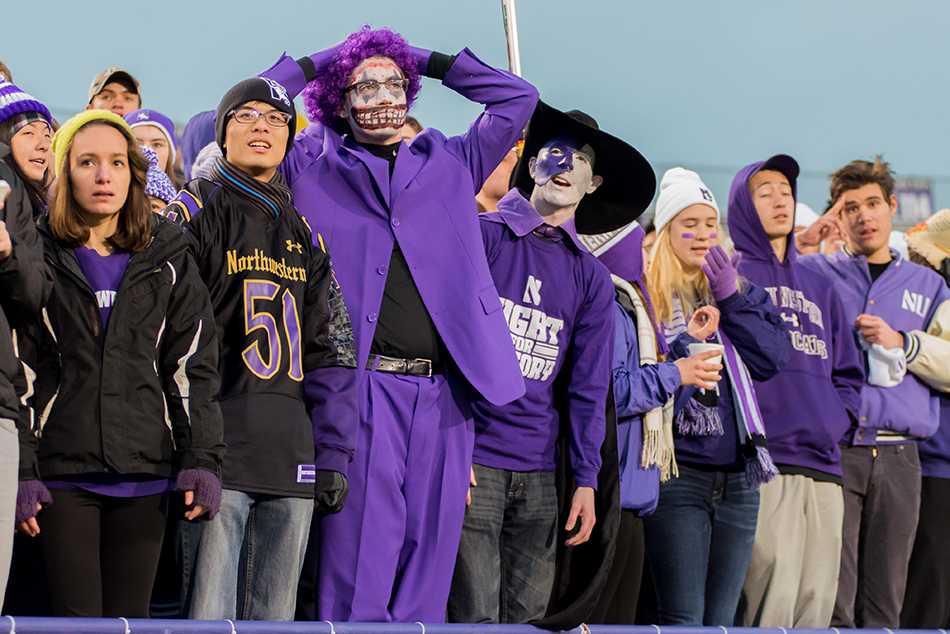 Medill junior Michael Payant (center) attends nearly every Northwestern football or men’s basketball game — often decked out in face paint and a purple costume — and encourages other students to do the same. “It takes so little to hop on the shuttle and walk down to the game,” he said. (Daily file photo by Nathan Richards)

Medill junior Michael Payant (center) attends nearly every Northwestern football or men’s basketball game — often decked out in face paint and a purple costume — and encourages other students to do the same. “It takes so little to hop on the shuttle and walk down to the game,” he said.

Where are the students? Breaking down Northwestern’s attendance challenges

Gram Bowsher has heard it all.

For more than two years as president of Wildside, the official student section of Northwestern Athletics, Bowsher fielded all kinds of complaints about his peers: that students don’t care enough to attend NU sporting events, that Wildside doesn’t do enough to motivate them, that attendance has fallen off from the good old days, that empty seats at basketball and football games reflect a moral failing of the NU student body.

“You get a lot of, ‘What else do they have going on that’s more important than going to a game?’” Bowsher told The Daily. “You typically just ignore it. They’re entitled to their opinion.”

NU students take endless flak for their supposed apathy toward Wildcats sports. But there’s probably a greater explanation for the sometimes-empty bleachers at football and men’s basketball games than some sort of spirit-discouraging culture.

“(Student attendance) has been a little up and down, a little inconsistent,” athletic director Jim Phillips told The Daily on Tuesday. “At times it’s been great, at other times maybe it’s the quality of team or season we’re having. Maybe it’s the time of year, midterms, finals, so I think there’s lots of influencers that go into it.”

Sporting events pose opportunity for cultivating school spirit, connecting with classmates and enjoying the college experience, and Phillips called student attendance an “X-factor” in building home-field advantage. So why is turnout at football and basketball games so unimpressive at first glance?

With the help of the people most involved in cultivating student attendance, The Daily analyzed different theories for the unoccupied seats.

NU has the smallest total enrollment in the Big Ten and less than half the undergraduate enrollment of the next smallest school in the conference. This size disadvantage inherently limits the number of students who can show up to games, relative to NU’s peers.

“I think we’re doing all right,” University President Morton Schapiro told The Daily in January. “You’ve got to remember we’ve got only 8,000 undergrads.”

Even Penn State, which brags about the size of its student section, doesn’t hit Ryan Field’s allotment proportionately. Penn State sold about 20,000 student ticket packages, accounting for around half the undergraduate enrollment at the University Park campus.

The student sections at Welsh-Ryan Arena are less vast than those at Ryan Field, (with room for about 1,000, according to the athletic department) but the same argument applies: NU is a relatively small school and simply has fewer people to fill the bleachers.

“With some schools they only need to convince 10 percent or 15 percent of their student body to go to a game, whereas to have a full (football) student section, we need to convince well over half,” Bowsher said. “The challenge is in having to show almost everybody that going to a game is worthwhile, not just focusing on your more dedicated, rabid fans.”

Then again, NU doesn’t consistently fill its student sections the way Ohio State, Penn State, Michigan and others do (The athletic department declined to share any specific student attendance figures, but those differences are easily apparent).

On all but special occasions, empty rows are easy to spot in the Ryan Field and Welsh-Ryan Arena. Clearly, the issue goes beyond just NU’s size. Inconvenience could play a role.

Athletic department marketing director Heather Obering serves as Wildside’s faculty adviser, consulting the group’s executive board and other student groups about attendance issues. The result of those conversations, she says, has been the creation of the Fitzerland tailgating area, an increase in shuttles to games and improved routes for those shuttles.

“It’s just about making it easy,” Obering told The Daily. “Because if you’re going to ask someone to go to a weeknight basketball game, and maybe it’s midterms week, and they have to wait 30 minutes for a bus or they have to walk up here when it’s 5 degrees outside, that doesn’t make anyone want to go.”

And though not on campus, NU’s athletic facilities are no farther from the center of student life than those at many other Big Ten universities. With an efficient shuttle system, that distance should be no obstacle.

Of course, various factors remain out of the athletic department’s control. The weather toward the end of football season deters attendance, students say.

Take Josh Cohen, a Weinberg junior and longtime college sports fan, who said although the games are “really convenient,” he has attended only two football and two basketball contests this year. The weather is bad, football games take up a full day, one football game fell on a religious holiday, homework doesn’t complete itself and so forth.

No matter how accessible the games are, staying home is always easier.

Medill junior Michael Payant has become the (painted) face of NU sports fans by altering his priorities. For the last two years, Payant has attended almost every football and men’s basketball game, painting his face Cats colors and donning a purple wig and blazer each time.

“It takes so little to hop on the shuttle and walk down to the game,” he said hours before NU’s men’s basketball game against Indiana last month. “There’s so much to be gained from doing that that I would just love if more people (would).”

Perhaps, as a popular stereotype goes, NU students are too busy studying to attend sporting events?

“I don’t buy that one as much,” Bowsher said. “I buy it more for basketball than I would for football. The football games are on Saturdays. You’re not really doing anything. If that was the case, students wouldn’t go to any of the other events that they go to.”

These dilemmas exist at all universities, though at schools with greater emphasis on athletics, clubs might be more likely to schedule around games. The academic effect might also be exacerbated by the quarter system, which results in more midterms and finals that tether students to their laptops and textbooks.

This issue can’t be easily addressed.

“It’s a built-in excuse because wherever you go, you are a student,” said Payant, a board member at Students Publishing Company, The Daily’s parent organization. “You always have the homework, classwork, academics excuse.”

The price of free

As the only Big Ten school that doesn’t directly charge students for football and basketball tickets (sports attendance is paid for through a $47 a year athletic events fee built into tuition), NU removes one barrier for those wishing to attend games. Just imagine how poor attendance would be if the athletic department charged students for entry… right?

Psychologists have developed a concept called “effort justification,” which holds that the more people sacrifice to attain something, the more they will enjoy it. Apply this concept to NU sports, and perhaps students would value game experiences more if they have paid for them. If students were required to forfeit a small fee for season tickets, they might feel more compelled to show up even when the weather is cold or the team is bad. If the tickets have already been paid for, you might as well put them to use.

“Imagine you have a ticket, and it’s either free or not free, but then you wake up on that day and say ‘I don’t really feel like going,’” Duke behavioral economics Prof. Dan Ariely told The Daily in a voice message. “It turns out the more you’ve paid, the more committed you feel to going. The money is helpful because it creates a sense of commitment.”

Bowsher suggests the concept may not apply to college sports, where so much of the student crowd comes from casual fans who go because their friends are attending.

“I think you would have a more stable number but not necessarily a bigger number,” he said. “You might get the 1,000 students who pay to come to every game, but you’re not going to get the maximum capacity at any point because there are people who go to games who are just going because their friends are going.”

Obering said the athletic department evaluates its options after every school year but has no plans to change the existing structure.

Winning is (almost) everything

Everyone agrees the easiest (or perhaps hardest) way to boost student attendance is performing better on the field and court.

“I think winning or losing,” Payant said, “is the biggest arbiter of how many people come.”

The Ryan Field student section overflowed for the Oct. 5, 2013 football game against Ohio State, a primetime matchup NU entered undefeated and ranked in the top 20 in the country. And last basketball season, after months of lagging turnout, students showed up in droves for the Cats’ game against Nebraska, presumably in reaction to NU having won four of the previous five contests.

In both instances, the Cats lost, their season went downhill and student attendance returned to uninspiring levels. With both the football and men’s basketball teams underperforming over the last two years, most current students have primarily experienced the turnout that comes with consistent losing.

And there’s little reason to believe fans preferring successful teams is a problem unique to NU. Studies on both professional and college sports have found attendance highly correlative with team winning percentage. In the end, winning is the main factor in breeding attendance.

“If you look at what our biggest-attended games are every year, it’s always against better teams,” he said. “People come because they want to watch a good game or because they want to see something exciting. That’s why people went to GameDay two years ago when we played Ohio State. That’s why people always go to the Homecoming game because there’s just a bigger atmosphere around it. And obviously having a winning team makes more games exciting like that.”

Fan attendance and winning present a chicken-and-egg dilemma. When attendance is strong, players are energized and recruits are impressed, which begets more winning and more attendance. Meanwhile students have a better time in a livelier atmosphere and are therefore more likely to show up again the next week.

Winning may be the largest factor in student attendance, but it’s certainly not the only one.