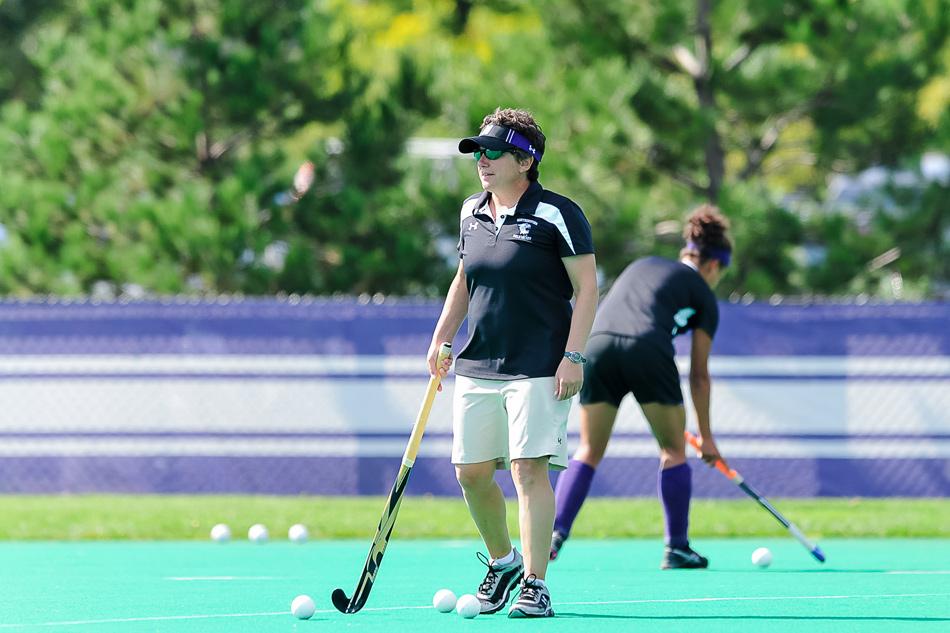 Field Hockey coach Tracey Fuchs reflects on how practice during COVID-19 is going.

The Sideline: Tracey Fuchs, ‘the Michael Jordan of field hockey’

Not many people have revolutionized an entire field. Yet there is one woman on campus who has done so with field hockey: Tracey Fuchs, Northwestern’s field hockey coach.

Fuchs has traveled the world as a player and coach for field hockey teams ranging from college to the Olympics. She has set records and topped leaderboards at the college and professional level. Those at the national level have described her career as legendary, and she has the resume to prove it.

While at the University of Connecticut, Fuchs earned All-American honors three times, won the Honda Broderick Award for the best field hockey player in the country in 1987 and broke seven school scoring records. In 2005, she was named USA National Coach of the Year after leading the USA Field Hockey team to a seventh-place finish in the Junior World Cup, and in April 2014 she entered the USA Field Hockey Hall of Fame.

Fuchs’ longtime friend and Olympic teammate, Liz Tchou, remembers her as being a one-of-a-kind player.“She was the flashy player,” Tchou said. “She was very competitive. Definitely in her year, she was one of the best players at the time. She was also one of the most humble players. That’s a trait in her that will stand the test of time.”

Even players Fuchs brings in know of her dominance.

“She’s basically the Michael Jordan of field hockey,” said Chelsea Armstrong, who played for Fuchs from 2009-12. “She’s an idol for the kids who come to play at Northwestern. I personally learned a lot. I definitely got more sound of my play personally. Seeing the team develop was also pretty special to see the program get turned around in the four years I was there. We loved every second of it.”

Fuchs is known far and wide as one of the premier field hockey coaches to ever be a part of the game. As a player, Fuchs joined the USA team in 1988 for the Seoul, South Korea Olympic Games as well as the 1996 Atlanta Games. As a coach, Fuchs earned an automatic spot for the 2012 London games after she helped lead the U.S. team to its first Pan-American Games gold medal.

Fuchs is notorious for her competitive fire. Unlike her playing style, she keeps it simple when she’s coaching: no flash, no fireworks and confetti, just field hockey. When she takes the field, formerly as a player and now as a coach, her mind focuses on the game. She plays no games or tricks. Fuchs wants to win.

“She’s a silent competitor,” said Tara Puffenberger, a former player under Fuchs at the national level and for the Wildcats. “She’s silent. The thing that shows is winning. It’s not all about all the flashy things, she’s just very blue-collar and … a true competitor.”

Fuchs does not focus only on competition when she coaches. She’s been developing her coaching style since she began as an assistant at Connecticut in 1988. From there she coached the U-21 National team, the Michigan Wolverines and the U-17 National Team until finally arriving at NU.

“It’s still a work in progress,” Fuchs said. “I had five national-team coaches, so I try to combine the best parts of their coaching and put them into my game. Still I go to conventions and clinics and talk to my peers and so forth. The best coaches don’t think they know it all.”

She has been around the block a few times and understands coaches cannot be monolithic in their coaching style. After coaching for so many years, she learned one of the most important qualities to have.

“Trust is number one,” Fuchs said. “You can be the best coach in the world, but if your players don’t trust you and you don’t have trust in them, you’re not going to go anywhere.

“We’ve really developed a culture here where the freshman are treated like the seniors, and I put so much trust in our leadership to make decisions on the field. That empowers them, and when they feel empowered and a part of the process, then they’re going to be better not only on the hockey field but all-around.”

Bringing in the best

Through her tenure as coach, Fuchs has brought in some of the best players in the country to NU. Armstrong, arguably the number-one player to come through Fuchs’ program, remembers playing under Fuchs and her effect on the team. Armstrong made the All-Big Ten team all four years of her career, was named first team All-American in 2011 and 2012 and scored the most goals in a Cats career (100) and single season (29).

“She’s a master of the game, both tactically and technically,” Armstrong said. “She has so much experience playing at such a high level, which really translates well to her coaching.

Puffenberger also is one of the best players to compete under Fuchs. Puffenberger cannot take all the credit though; her long relationship with Fuchs played a huge part in her field hockey development.

“I’ve known Tracey since I was about 13 or 14 years old,” Puffenberger said. “At the time she was the coach for the Under-21 team. From day one, we kind of just understood each other. She knew exactly what to say and exactly how to coach me. It was really cool that we established this trust.”

Both Armstrong and Puffenberger, one year apart in age, were going to join Fuchs’ squad at Michigan, but after Fuchs left the Wolverines to take the coaching job for Northwestern, Armstrong followed Fuchs, while Puffenberger played at Virginia for two years and then transferred to Northwestern in 2012.

“It wasn’t really working out with the coach (at Virginia) and so I reached out to Tracey to explain the situation,” Puffenberger said. “She opened up a spot, an opportunity for me to come to Northwestern. I knew that she wouldn’t stick herself out there if she didn’t think it was a good fit for me. I wanted to work hard for her because she stuck herself out there for me.”

“First and foremost was my relationship with Tracey and her staff,” Armstrong said. “Northwestern is also a great school academically and the location, near Chicago, was great.”

Fuchs wanted to play ice hockey from a young age and grew up playing roller hockey in Long Island with friends in her neighborhood. She was always a New York Rangers fan and dreamed of taking the ice one day.

“Growing up, there were five boys who lived next door,” Fuchs said. “We played street hockey, roller hockey, backyard hockey all the time, so for me, it was an easy conversion (to field hockey). I was a diehard Ranger fan. I thought I would play for them when I grew up. It was basically the influence; we had a lot of guys in our area that played street hockey. Picking up a field hockey stick came so naturally to me.”

Fuchs also has three sisters who played the game, so she was able to pick it up easily.

“I started much younger picking up a stick,” Fuchs said. “It’s something I love to do. I would sneak up to my sisters’ practice and watch what they would do and come home and set up cones myself. I was addicted to it. I love the sport. It’s so exciting and fast that I just stayed with it.”

Fuchs eventually went on to play at Connecticut and become one of the program’s most accomplished players. The Huskies honored Fuchs this August when the Cats traveled to Storrs, Connecticut for their second away match. During her time playing for Connecticut, Fuchs scored the second most points in program history with 178 and was one of only three players to ever score more than 70 goals in a Husky career.

After her time at Connecticut, Fuchs played in two Olympics and helped coach U.S. national teams for U-17, U-21 and the 2012 Olympics. After playing at such a high level and playing competitively for so long, coaching seemed to be the next logical step.

“She has this way of managing the game while she’s coaching to make the right changes and explain that to the players where they’re able to trust it, understand it and then execute it,” Tchou said. “That’s a big part of gifted coaches like her. She just has that understanding.”

On the grand stage of international play, Fuchs was not just one in the crowd. As a player, she helped lead her 1988 and 1996 Olympic teams to an eighth place and fifth place finishes respectively.

“Her nickname was Gretzky because of some of the moves she made,” Tchou said. “She would make certain moves that you would be like, ‘Wait, where did that come from?’ We were always in awe from the different ways she would score.”

While Fuchs was on the USA team from 1987 to 2004, she was a team captain for the final 14 of those 17 seasons. Fuchs also played in 263 international matches, the most of any field hockey player for the United States.

At NU, Fuchs has completely turned around the program. For the five years previous to Fuchs’s arrival, the team went 32-63 overall, 3-17 in the Big Ten. Since Fuchs’s tenure began, the team has gone 66-35 overall, 14-16 Big Ten not including this season. Fuchs has brought her love for the sport to the Cats, and NU has bought in. This season looks similar to last year when the Cats won a share of the Big Ten title during the regular season.

“The important thing is that (my players) know I care about them,” Fuchs said. “I take the extra time to get to know about each of them. I do this because it’s really fun. Practices can be intense. (At) practices, I’m not happy sometimes. But in the end, we’re chasing a white ball and trying to score into a goal cage so in the end, it has to be fun.”