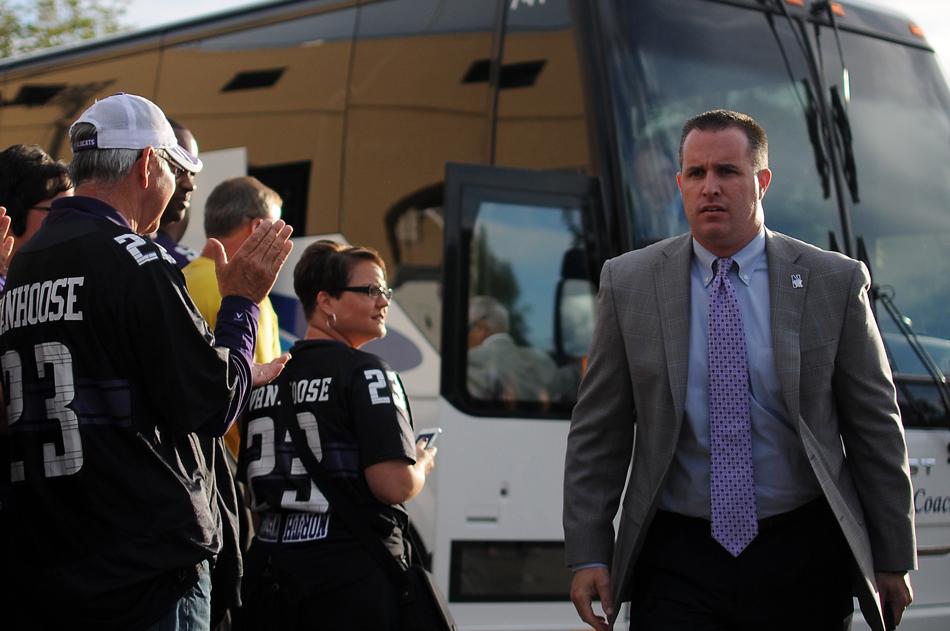 The Sideline: With Northwestern slumping, Fitzgerald needs to be more than likable

The 2013 Gator Bowl win was the watershed moment of Pat Fitzgerald’s coaching career. Not only did he erase Northwestern’s embarrassing bowl-win drought that dated to 1949, he also tied the school’s single-season record for wins with 10 and became the school’s all-time winningest coach in one fell swoop.

The postgame press conference was more of an extension of the celebration than an actual journalistic mission. The media, myself included, mostly lobbed softballs at Fitzgerald, culling joyous answers for our stories on the arrival of NU football. Just about everyone had a smile on his or her face. Fitzgerald himself basked in the enormity of his accomplishment, with the company-man, aw-shucks aplomb he always employs. In one instance, he noted that Chicago’s Big Ten Team would return as Chicago’s Big Ten Champions (he left out the Gator Bowl part), and then quickly joked that season tickets would be going on sale immediately.

It was the new era before Chris Collins’ “NU Era.” It was the coronation for a coach so beloved, he could flirt with the Michigan head-coach job before 2011 and many fans would have been happy he got it.

Tucked in that celebratory presser was a small reminder of the program’s place around the country. An SEC reporter, first mistakenly referring to Fitzgerald as “Coach Fitzpatrick,” asked the coach something along the lines of what it meant for a lowly Big Ten team to win a bowl game against someone from the vaunted SEC. You could see in Fitzgerald’s eyes how utterly ridiculous he thought the question was. The Northwestern media exchanged glances of incredulousness. Then-senior linebacker David Nwabuisi, sitting next to Fitzgerald, whispered to his coach, trying to make sure he wouldn’t blow up on the bumbling reporter.

Fitzgerald handled the question eloquently, and with class. He easily deflected what could have been a contentious moment. And yet, it should have been a small reminder, the program hadn’t arrived because of that one game. The rest of the press conference adopted a light tone. And of course, Fitzgerald ended the affair with his verbal signature: “Go Cats.”

It’s easy to see why Fitzgerald is so likable, and why he is the kind of personality that not only serves as an ambassador for his football program but even serves as a face of a top academic university as a whole. Fitzgerald bursts with an all-American quality, a blue-collar guy with a million-dollar smile. He’s the ’90s sitcom dad who may not be able to solve a difficult math problem (or understand when it’s beneficial to go for it on fourth down) but has the intangibles that make him lovable anyway. Fitzgerald is the platonic ideal of a man’s man. In an alternate universe in which you were dating his daughter, he would greet you at the door for your first date with a crushing handshake and a mandate to be out no later than 11. You’d bring her home by 10.

Fitzgerald’s peers speak of him in glowing platitudes that are as inoffensive as the man himself. Steve Schnur, the quarterback of NU’s back-to-back Big Ten champion teams in the mid ’90s, recently described Fitzgerald the player as “regimented, organized and a good leader,” which, according to Schnur, is “just like how we see him today.”

A former player said Fitzgerald’s best quality was that he’s “100 percent loyal,” and Fitzgerald earned this trust because he himself went to NU. Current players love him just as much. After a tough week of practice, in which Fitzgerald challenged his team physically after back-to-back losses, defensive end Dean Lowry still insisted Fitzgerald was a “player’s coach,” noting that he wouldn’t put the team through strenuous practices if it wasn’t what the team’s leaders wanted.

To Fitzgerald’s credit, he earned this credibility. It started when he took over the program in incredibly tragic circumstances after the death of Randy Walker. At 31, Fitzgerald went from a linebackers coach to running the entire program. At home, he had a 20 month-old son and a pregnant wife. From that moment in July 2006 to the end of the 2008 season, Fitzgerald turned the Wildcats into a nine-win team. By the end of the 2012 season, he finally delivered a bowl win.

In mid-2014, Fitzgerald is questioned more than ever. His on-field decisions, his recruiting style and yes, even his likability, are now the subject of more scrutiny than ever. The merits of Fitzgerald’s past accomplishments are being observed critically. Is his team closer to the 10-win, Big Ten contender it was coming off the Gator Bowl? Or is the program actually in decline? Was the bowl-win potentially an outlier season amidst a nine-win to five-win slide from 2008 through 2013?

It’s hard to know for sure if the extra attention is actually bothering Fitzgerald. We can get on him for flip-flopping, for labeling the team an embarrassment to fans one day and then asking every one to “chill out” on another. But that’s no different than the media writing the program is falling apart one week and coming back with “everything is going to be okay” the next. We can criticize Fitzgerald for often sparring with the media, and clinging to an annoying secrecy pledge that labels a player obviously blowing out his knee with a “lower body injury.”

But the crux of how we view Fitzgerald goes back to that Gator Bowl win. While lifting up the trophy, he proudly proclaimed that Northwestern was “here to stay.” The next year, after a season in which the team lost seven games, in seemingly increasingly ridiculous fashion each week, Fitzgerald’s “here to stay” quote became cringe-worthy. The only way it could have been worse is if it were said in front of a giant “Mission Accomplished” banner.

The praise of Fitzgerald after that Gator Bowl, however, was just as cringe-worthy. It’s unfair to say that “we” failed. Maybe you were the skeptical one. But a lot of us failed. There was a failure to challenge the assertion that NU was here to stay. After that day, few people wanted to believe anything else.

Now, Fitzgerald is a victim of his own expectations. The expectations very, very few thought to assume were too high. Coaches often publicly believe their team is at least a contender for a conference championship, even if just to give fans hope, even if privately they feel completely different.

NU’s on-field product has a host of problems, obviously. Schematically, it’s a spread offense that bizarrely enters power sets at times. The team plays conservatively. It’s unclear where they’ll have an advantage on the field against Big Ten opponents. Frankly, the team is boring and has a shocking lack of identity for a coach with a big personality. If you described the team in one word, what would it be besides underwhelming?

Off-the-field, however, Fitzgerald remains intriguing. His likability has taken a hit. And it will be fascinating to watch him deal with growing adversity. He must decide where to compromise. He can move the bar lower and try to convince everybody the hype he placed on the team after 2012 was premature. Or he can continue to raise the expectation levels and risk another embarrassment if this season goes down in flames.

It might seem silly to ponder Fitzgerald’s likability so much. Nick Saban isn’t exactly a teddy bear, but few care if he’s the devil as long as he keeps bringing championships to Alabama. NU’s football program, however, is intrinsically tied to Fitzgerald’s personality. What the team lacks in on-field success, they make up for in Fitzgerald’s bluster. This program is Pat Fitzgerald. He has the kind of personality that brings the University the kind of attention it desperately craves.

Fitzgerald isn’t just a victim of his own expectations — he’s a victim of his own likability. He drew this attention on himself, the eyeballs NU needs to be relevant. But that means he’s also drawn the scrutiny of a fan base and media contingent expecting more than ever before from this program.

And we’re here to stay.