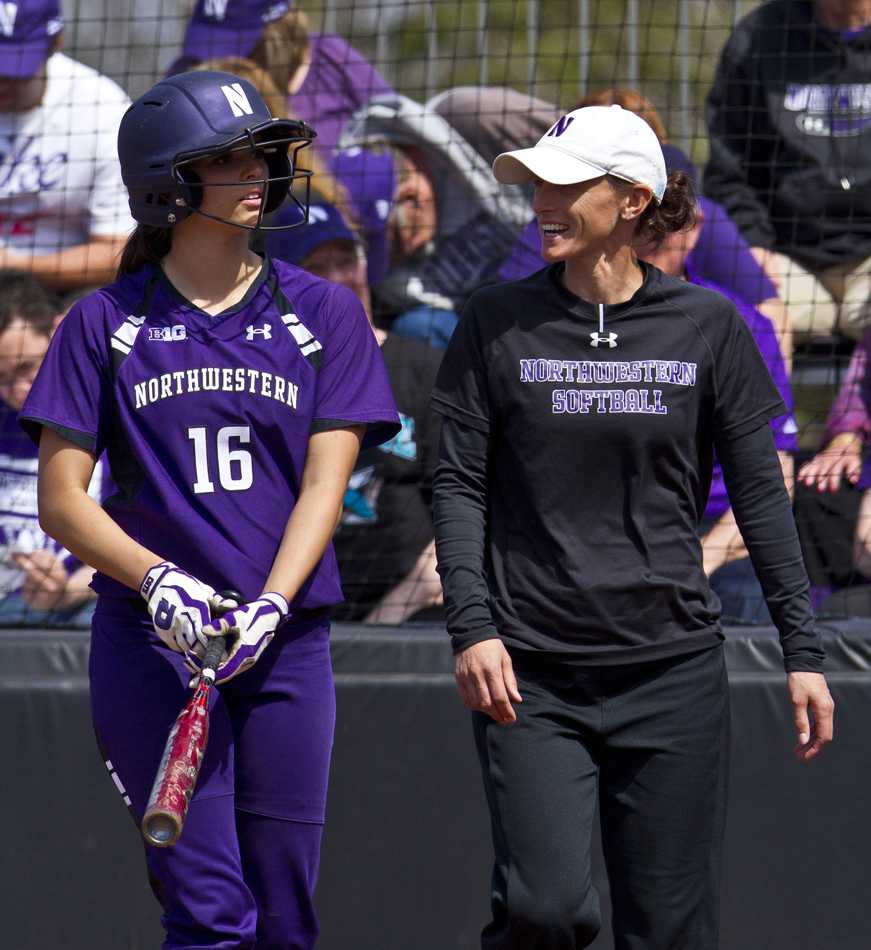 Senior Paige Tonz is one of many Northwestern players to benefit from Kate Drohan’s leadership. Drohan has been the Wildcats’ coach since 2002 and has compiled a 446-242 record. (Source: Northwestern Athletics)

Senior Paige Tonz is one of many Northwestern players to benefit from Kate Drohan’s leadership. Drohan has been the Wildcats’ coach since 2002 and has compiled a 446-242 record.

The first time you meet Kate Drohan, it is normal to feel intimidated. Most of her recruits feel the same way.

This is a coach who went to a tournament to recruit a center fielder and spent most of the day heckling her from behind the breakaway fence.

But that intimidation represents just the surface of a coach who has built a successful program by stressing excellence in every aspect of college, from the diamond to the classroom.

“I could tell that even though she was tough, she really cared about us as student-athletes,” senior third baseman Marisa Bast said. “She was going to be invested in me as not only a player but as a woman. That’s one of the reasons I came here.”

However, Drohan almost left coaching for good to take a path toward being an athletic director.

The softball coach was an assistant athletic director for facilities at Boston College in 1997 when she yearned to return to the diamond. A friend of hers got her an interview to be an assistant to then-Northwestern coach Sharon Drysdale, and 17 years later, Drohan has left her administrative ambitions in Chestnut Hill, Mass.

In the 13 years since taking over the program from Drysdale, Drohan has accumulated 446 wins and is one of only five coaches to lead a Big Ten program to the College World Series and one of two to make it to the national title game.

“Kate is a very driven leader,” former Wildcats’ outfielder Kristin Jensen said. “She is hands down the captain of this program.”

Drohan grew up in Connecticut, went to school in Rhode Island and worked in Massachusetts but eventually ended up in Evanston.

“There was a pull to Northwestern, specifically their great work with gender equity and how they treat female student-athletes here,” Drohan said. “To work for one of the greatest softball minds in the country in Sharon Drysdale, there was no doubt about it, this would be an incredible opportunity to come out to Northwestern.”

Caryl Drohan, Kate’s twin sister and NU’s associate head coach, said Kate has a skill set that would have made her a great coach or athletic director, but the signs of her leadership didn’t come through until the pair was at Providence College playing softball for the Friars.

“Kate’s leadership skills have always been there, but they really came to the surface in her college years,” Caryl Drohan said. “That’s when I saw her wanting to be in charge of a group … Experiencing everything with Kate, Kate’s always pushed herself to be good at whatever she’s doing, and this is where her passion landed. … I think she would be good at anything she does, and I’m not saying that as her sister.”

As is true with many sets of twins, you can’t talk about one without talking about the other.

This is particularly true with this pair, as the two are essentially co-head coaches in Drohan’s eyes. Caryl Drohan was not as clear on her role, claiming she can’t give labels to any member of the coaching staff because it’s a collaborative effort.

“Within our coaching staff, everyone has a specific role within our program,” Caryl Drohan said. “I don’t think of it as a hierarchy thing. I think it’s about us having things that we can contribute to the program.”

That concept was put to the test last season when Drohan had to miss some practices for doctor’s appointments. Caryl Drohan took the reins of the program for that short time, and NU seemingly didn’t skip a beat. This past offseason with Drohan out on maternity leave, the rest of the staff had to pick up the slack and lead NU through the preseason workouts.

When Drohan got back in time for the regular season, she was impressed with the improvements the players made and their overall readiness for competition.

“It’s been so critical to our success this year,” she said. “I took a couple of months off in the fall, and when I came back in January, our team is fit. Our team is strong. Our offense is firing on all cylinders. We’re really balanced. Our pitchers are ready for the season. To be able to do that is a real gift, and our staff was outstanding.”

Although there is a tremendous amount of focus on the twins as one entity, Jensen said they are different people, which is what makes the program so successful.

“They are incredibly different in coaching styles, in leadership styles and personality,” Jensen said. “The combination of that is what makes them such a successful tandem.”

The hallmark of a good coach is more than just the results on the field. The disciples a good coach spawns also play a large part in establishing her legacy.

Drohan has had many former players and assistants have stints as college coaches including the current staff at Indiana University-Purdue University Indianapolis, which is headed by former NU volunteer assistant Amanda Rivera and includes former Cats Meghan Lamberth (SESP ’13) and Adrienne Monka (Weinberg ’12) as assistants.

Rivera was a volunteer assistant during the 2006 and 2007 seasons when NU went to the Women’s College World Series and came back in 2011 to reprise her role. She said the three years she spent with Drohan helped her grow to the point that she was ready to lead her own program.

“She absolutely mentored me to become a head coach,” Rivera said. “I was involved in every aspect of the program from practice to fundraising to working with recruits. … Even now, when I need a little pep talk, I call her just so she can make me feel good about myself for a second and help me get my compass back pointing north.”

Rivera’s description of her relationship with Drohan while on staff almost exactly mirrors how NU’s coach described her time under Drysdale.

“You see some head coaches that want to do it their way and micromanage everything. That’s not (Drysdale),” Drohan said. “She gave me space to explore my coaching voice and gave me great guidance in how to learn about how to be a coach.”

As for the players who step off the diamond and into the coach’s box, Jensen has a philosophy that many of the people who have passed through the NU program agree with.

It starts and ends with the types of players she recruits to NU.

“Kate doesn’t foster coaches, but she develops women,” Jensen said. “Everything Kate teaches us as players translates off the field, and as a byproduct of that, you have a handful of former Northwestern players going into the coaching field to not only stay involved with a game they love, but to impart some of the same wisdom and lessons that we’ve all learned from Kate.”

Drohan’s life changed when she gave birth to her daughter, Ellis, on Oct. 4, 2013. Though nobody was bold enough to say she has gotten softer since she’s become a mother, most have noticed a change in perspective for everyone in the program.

“All of us in general have a greater appreciation of life and things outside of the game,” senior outfielder Emily Allard said. “I think Ellis has brought an amazing perspective (to the) team as a whole.”

Drohan laughed at the notion that she has gotten softer, but she said she has a new viewpoint that has made her a little more patient than before.

“Any parent will tell you, you see the world through a whole new set of eyes,” she said. “What she’s done is she’s inspired me to be a better person, and I hope that’s having a positive impact on all parts of my life.”

If one person could notice a change it would be her sister, who has been by her side for all but five years of their lives.

She agreed with the consensus that Drohan has not changed as a coach and still has that same competitive fire. However, she said there are still a lot of things that have changed, even if they aren’t always visible.

“It’s given her better balance in her life, but I don’t think it’s necessarily changed her on the field or at practice,” Caryl Drohan said. “Ellis has changed everything and nothing with Kate.”