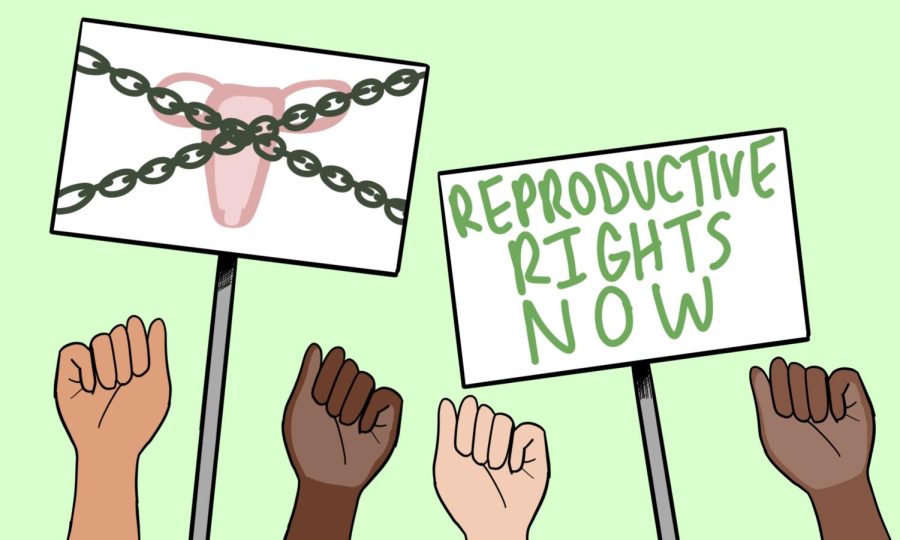 The Reproductive Justice Union says it aims to protect reproductive rights because of the impact restrictions can have on other civil rights.

Protesters gathered near Lovelace Park and marched to the 3100 block of Isabella Street to protest an anti-abortion lawyer who lives in Evanston on July 1 at about 8:30 p.m.

According to Cmdr. Ryan Glew of the Evanston Police Department, EPD and the Northern Illinois Police Alarm System Mobile Field Force did not interfere with the protest until protesters went onto the lawyer’s property. No arrests were made and there were minor property damages to the house.

“Once the protesters went on private property, threw paint on the private residence and lit a smoke bomb, the dispersal order was given,” Glew said. “The staged NIPAS Field Force Bike Team was activated and arrived on scene. The protesters immediately dispersed and went back to Lovelace Park without incident.”

The lawyer, Thomas Brejcha, is the founder of the Thomas More Society, a conservative Catholic law firm. He was a legal counsel in 1986 for the anti-abortion case National Organization for Women v. Scheidler and took the case to the Supreme Court three times. He continues to defend anti-abortion individuals across the country and has been doing so for more than 25 years.

Following the decision to overturn the landmark case of Roe v. Wade on June 24, a series of protests occurred in the Chicago area, including one the day of the decision.

The Reproductive Justice Union organized the Evanston protest to protect reproductive rights because of the impact restrictions on abortion can have on civil rights, including restricting the right to vote and undermining labor unions.

A flyer handed out at the protest said Brejcha is an important figure in the “grassroots far-right Christian movement.” The flyer also said his role in attempting to restrict abortion access is part of a larger effort to push back civil rights for women, Black, Indigenous and people of color and LGBTQ+ individuals. It also publicized Brejcha’s address.

According to its website, the NIPAS Mobile Field Force was created to provide a skillful response to civil disturbances and public demonstrations. It says it aims to provide its member agencies with a planned, organized and rapid response to occurrences.

A protester who chose to remain anonymous said she felt unsafe with the amount of police at the protest. She said she felt the police did not make any arrests or use excessive force because the protesters were mainly white.

“I went to a (different) protest on Sunday and it was just us walking around in circles at Harrison Park,” she said. “I think this (protest) did a really good job of hitting that intersection of state oppression as a larger entity. ”

On Reproductive Justice Union’s Twitter, it said it uplifts the different ways communities struggle and fight from a radical perspective for everyone’s access to health care, abortion and reproductive justice.

Anti-abortion laws, like the 1980 Hyde Amendment that prevented the use of federal funds to pay for abortions in most cases, disproportionately affect low-income individuals and people of color, according to PBS NewsHour.

“On the front line people graffitied, ‘If abortions aren’t safe, neither are you,’ the protester said. “They were throwing smoke bombs and fire crackers.”

Another protester said the organizers of the protests felt other demonstrations that had occurred in the Chicago area were not effective in promoting change.

“I decided to do the protest because I thought it was doing something that wasn’t just performative and had an actual goal,” they said. “The protests in Chicago felt more like a ritual and less like something that was actively strategizing.”