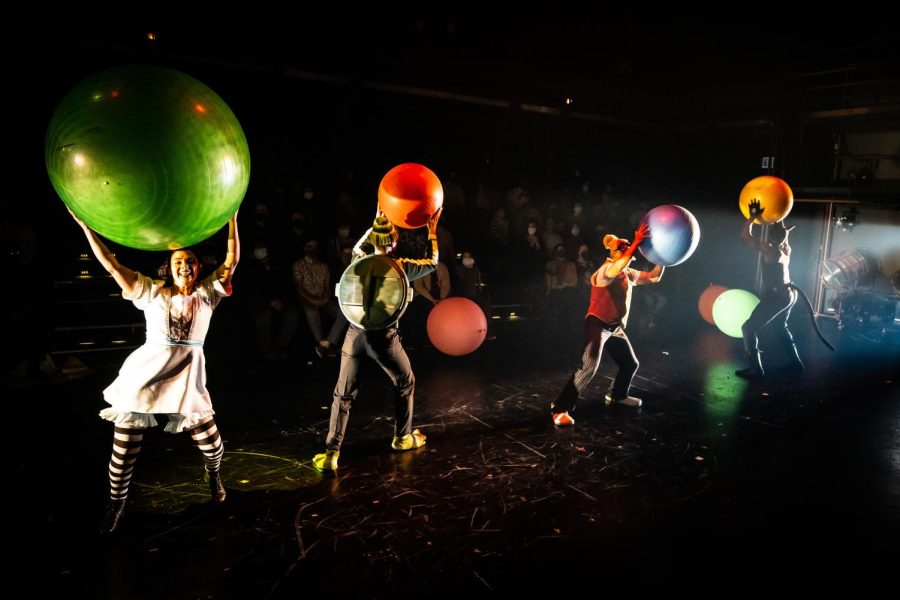 “Lookingglass Alice” is running from April 30 until July 31 in the Water Tower Arts District.

Lookingglass Theatre Company’s first production was a rendition of “Alice in Wonderland” performed at Shanley Pavilion.

“Every time we do it, (the stories) continue to mean something, and they mean something different even as the world changes,” Catlin said.

“Lookingglass Alice” has returned to the stage in the Water Tower Arts District, running from April 30 until July 31 after a seven year hiatus. Catlin said the production was originally planned for the spring and summer of 2020, but had to be postponed because of the COVID-19 pandemic. This year, Catlin said the show holds more value as an escape from pandemic gloom.

Ensemble member Molly Hernández, the first Latina woman to be cast as Alice in the production, said she has been able to bring in aspects of her identity, like incorporating Spanish into the script, to the story with support from other ensemble members.

“There was a little girl sitting in the front row who looked up at her mom and was like, ‘I’ve never seen an Alice that looks like me or that talks like me, or that sounds like me,’” Hernández said. “I get goosebumps talking about it. It’s why I love to do what I do, to show that representation.”

Hernández said the production is one of the most physically intensive shows she has done, requiring circus performance skills for the role of Alice. She said she and other performers have been training since February.

“It’s a mix of everything I love: dancing on the stage, talking and doing circus,” Rodriguez Cintra said. “It’s perfect. I’m bringing myself in all the possible ways to work.”

Hernández said she felt more comfortable and supported by the company because of its decision to uphold masking regulations for the audience despite Gov. J.B. Pritzker lifting the mandate in late February. She said due the ensemble members’ proximity to the audience, Lookingglass decided to prioritize the safety of their cast.

Ensemble member Kareem Bandealy said interacting with the audience is the most rewarding part of the show. He said the show revolves around imagination and expression, and seeing the audience participate and understand the concept of vulnerability that is prevalent in the show is his favorite part.

“Most nights, when the audience is bringing themselves and is infusing the event with their own energy, you don’t feel tired,” Bandealy said. “You feel energized and feel capable.”

Catlin said the goal of the show is to explore the joy and nonsensical aspects of wonderland following the heaviness of the pandemic.

“I found it very quickly to be a place … that reminded me of the reasons why I got into theatre,” Bandealy said. “I was just instantly reminded of my beginnings in theatre and felt like ‘Oh, I love it here.’”

— The Origin of Love: John Cameron Mitchell on “Hedwig,” “Shortbus,” and queer radicalism