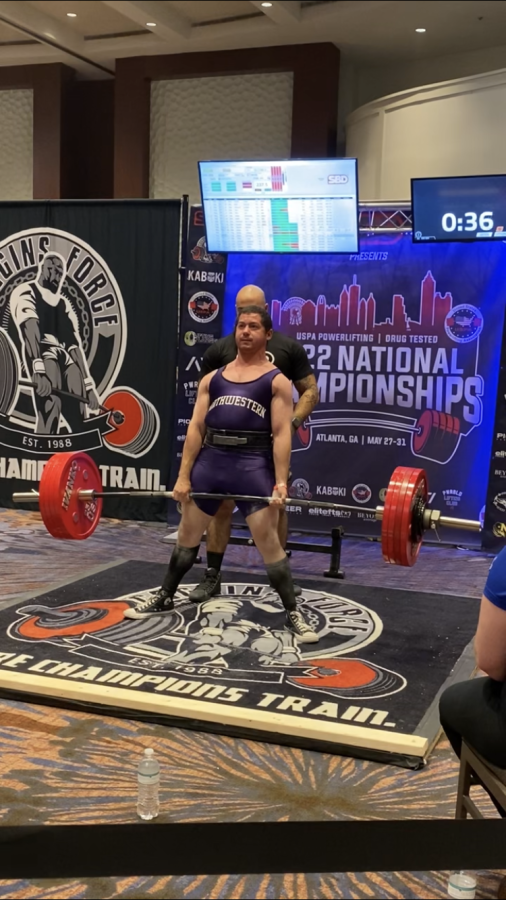 But Tropp represents the University well outside of working hours. A national powerlifting champion, Tropp wore an NU singlet while competing in May’s United States Powerlifting Association’s Drug Tested 2022 National Championships — an emblem of his Wildcat pride, he said.

In the open division for his weight class, Tropp won gold in the bench press and silver in the deadlift.

Tropp said he has participated in physically demanding sports like wrestling his entire life. Two years ago, he discovered powerlifting.

While pursuing his Ph.D. in polymer science and engineering at the University of Southern Mississippi, Tropp was approached by a stranger at the local gym. The person told him that Tropp was lifting the Mississippi state record for Tropp’s weight class, Tropp said, and encouraged him to participate in a nearby USPA competition.

At that competition, Tropp broke the Mississippi state record for bench press and deadlift. His future coach Stephen Wilson first took notice of him at the competition and began training him for free.

“As a postdoc and even as a graduate student, we don’t make a lot of money,” Tropp said. “To train me for free, he and his wife were really amazing … because I didn’t really know what I was doing.”

After Tropp moved to Chicago in 2020, he initially trained with another coach but has since stopped. He stayed in touch with Wilson, who still sends him workout programs for free.

Wilson said Tropp’s wrestling background transferred well to powerlifting. Wilson saw Tropp had the potential to be an elite-level lifter, he said.

While working as a postdoctoral research scientist at NU, Tristan Clemons, who is currently a polymer science professor at USM, crossed paths with Tropp. A retired goalkeeper for the Australian national field hockey team, Clemons said the two researchers gravitated toward each other because of their shared background in sports.

Tropp’s experiences show students that anyone, no matter their background, can be an exceptional scientist, Clemons said.

For Tropp, powerlifting is his hobby, but holding a faculty position is his career goal. As an aspiring professor, Tropp said he aims to provide students mentorship and guidance.

Both powerlifting and research emphasize self-improvement, Tropp said, which he appreciates. Every day, he said, he seeks to further explore the complexities of the two disciplines.

“As you get deeper into the science, you realize that there’s all these details,” Tropp said. “Powerlifting is the same thing — to get better, you need to dive deeper.”