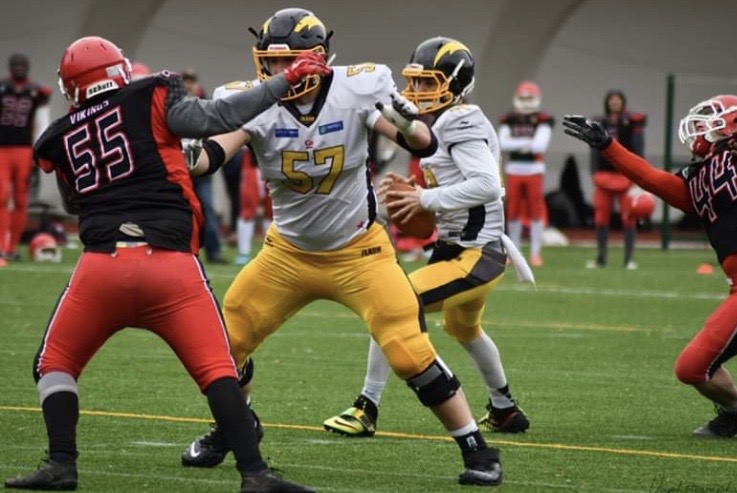 Former NFL player and student-athlete Tommy Doles (Weinberg ’18, Kellogg ’19) spoke with The Daily about his recently published book, “Gridiron Redemption: The NFL, Paris, and a Pandemic.”

The memoir tells the story of Doles’ journey from Northwestern, to the Chicago Bears and Atlanta Falcons in the NFL and then to Paris during the pandemic. He shares about observing football in different contexts and how he grapples with moving on from something he loves.

The Daily: After you were cut for the last time as an undrafted free agent, you started to think about moving on from football. How have you dealt with any identity issues that have arisen as a result?

Doles: From the time I had been a sophomore in high school, people looked at me as, ‘Tommy, he’s a good football player.’ That becomes not just something that you do, but a little bit of who you are, even though anyone who’s wise will warn you against letting that happen. Then, when you get off that fast lane, you sort of have to wrestle with, ‘Well, who am I now if I’m not an elite football player, if I’m not playing in the NFL at the top of my classmates, my peers?’

I’ve learned to detach my identity a bit from what it is that I do because it’s pretty freeing. My faith is what gives me my ultimate identity, sense of purpose, security and meaning, so that’s a foundational bedrock that I come back to and that frees me to pursue these other things. It’s definitely a work in progress and ongoing question, but I feel more at ease and confident pursuing these things after having the experience I did moving away from football.

The Daily: You decided to spend your last year playing professional football in Paris, with your wife. What led you to make that decision?

Doles: We thought we would love to travel and see the world. Football could be a tool for us to be able to do that, to build relationships and connect with people overseas. That was a track we wanted to take in hopes of finishing my football career with a better taste in my mouth because I was a little jaded and disgruntled after getting signed and cut by the NFL — it felt like it was for the money and there was no real team love and loyalty like we had at Northwestern. So, ‘Let’s go see a new part of the world, have a cross-cultural experience and also have some fun playing football before I hang up the cleats.’

The Daily: What were the biggest differences you noticed about playing American football abroad?

Doles: You’ve got such a distinctly American game, but then it’s exported overseas to a country that is very proud of its own culture and isn’t necessarily interested in hitching a ride on what the Americans do. When I was playing at Northwestern, and even more so in the NFL, it’s something that people celebrate and glorify — you got a little taste of fame because people love football or football players. It’s a big deal and people are pursuing money with it, fame — but in France, none of those incentives are in place. You’re not going to get rich playing it and certainly no one’s going to be wanting to take pictures with you at a restaurant because you’re an American football player.

The Daily: What are some common misconceptions about pursuing the NFL?

Doles: There are a lot of people pursuing professional football, even playing in the NFL, who live much less glamorous and stable lives than people might expect. It’s sort of this unstable lifestyle that guys have to decide how long they want to stay on. Even if you do make it to the NFL, the average career is like two years, so it’s a hard road to walk on.

The Daily: What advice might you give to athletes who are also looking to make it big?

Doles: Think about your identity and who you are apart from the game. Understand that football is temporary and isn’t going to last forever. It’s a gift, a great thing that you can have and be a part of while you’re here. Because it’s temporary, don’t be in a rush. Don’t be looking forward to the next thing to the detriment of what’s going on in the here and now. Also, focus on the relationships because those are the things that are going to last even after you can’t play football anymore. That’s the best part you can take away.

— Q&A: Julie Payne-Kirchmeier reflects on her time at Northwestern