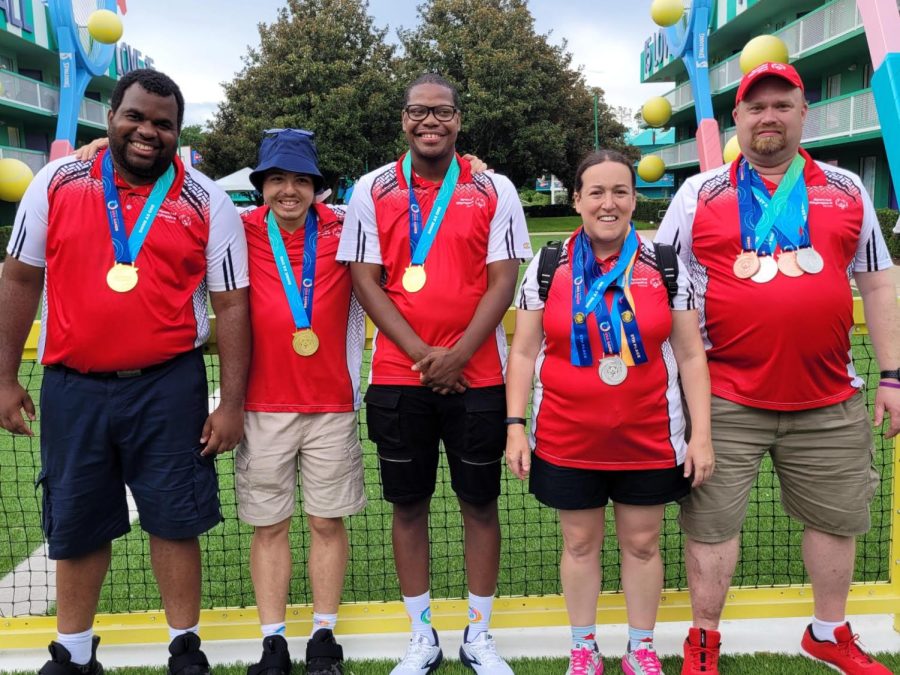 As a child, Riley Hoffman often wished he could go to Walt Disney World and see Mickey Mouse. Earlier this month, he finally did — and won a gold medal in Special Olympics flag football along the way.

“I came from a long way, and to get the opportunity to play at Disney and compete, that was pretty cool,” Hoffman said.

Hoffman was one of five athletes from Evanston who traveled to Orlando, Florida, for the Special Olympics USA Games held June 5-12.

Special Olympics, the world’s largest athletic organization for those with intellectual and physical disabilities, runs the USA Games every four years. All Evanston athletes won at least one medal, competing in sports like track and field, flag football and powerlifting.

Ahead of the games, preparation looked different for each athlete. For Hoffman, it meant drinking water, staying disciplined and learning new plays. Caroline Colianne, who competed in track and field, said she would often run on her own outside of practice.

All of the athletes trained with Evanston coaches Leonard Woodson and Matt Nelson. The pair traveled to Orlando with the athletes and coached the Illinois track and field team during the games.

Kirk Nelson, who competed in powerlifting, said the coaches were supportive and pushed him to improve ahead of the games.

It was the first time all of the Evanston athletes but Colianne competed at the USA Games. There was plenty of adjustment for them once arriving in Orlando.

Hoffman said he was used to playing with his Evanston teammates, but it was initially difficult adjusting and knowing what to do on the field with new teammates. The level of competition and speed of their opponents were also different from past experiences, he said.

Woodson said most track and field events were planned for the morning so athletes wouldn’t compete in high heat or afternoon storms. There were several ways for runners to cool down after their events, he said, including sitting under a misting fan and standing by cooling towers.

Representing Illinois on the national level was a change, too. Kirk Nelson said it was especially exciting to compete against athletes from other states and meet other Illinois athletes.

“I got a chance to bond with my colleagues, teammates and coaches, which was cool,” Kirk Nelson said.

Sandra Nelson (Communication ’70), Kirk Nelson’s mother, made the trip to Orlando for the games. She said it was “gratifying” to see the community Special Olympics provides, including the close friendships her son developed with fellow athletes and coaches.

Following the end of the USA Games, the athletes returned to Evanston. For Colianne, Grayson Deeney and Woodson, though, the competition wasn’t over quite yet. The group went to the Special Olympics Illinois Summer Games, held from June 17-19 in Bloomington, Illinois.

Colianne caught COVID-19 following the USA Games, which she worried might affect her performance at the Summer Games. She said she felt all right, though, and was excited to get back to competing after quarantine.

Woodson said participants at the USA Games wore their matching team polos and marched out together at the Summer Games. Many athletes were sad to leave Florida and their fellow athletes, he said, and the Summer Games was a reunion of sorts.

One constant of Special Olympics, Woodson said he told his athletes, is running into the same athletes and coaches year after year. Some USA Games coaches have started to make online groups for teammates to keep up with each other, he said.

Correction: A previous version of this article misstated who attended the Special Olympics Illinois Summer Games. Grayson Deeney attended and competed for Evanston as well as Caroline Colianne and Kirk Nelson. The Daily regrets the error.