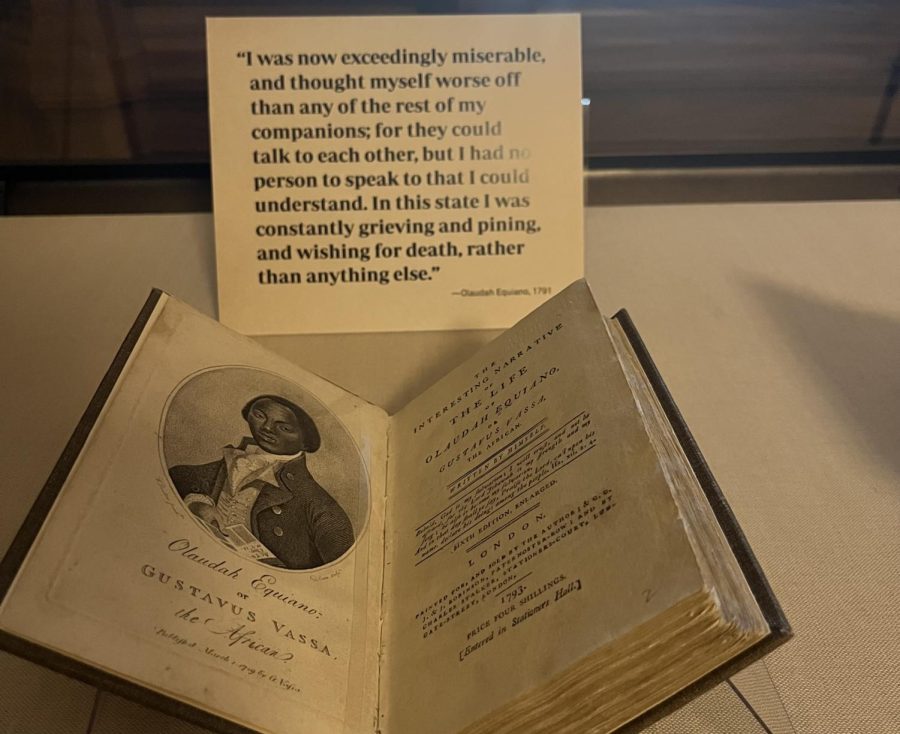 One of the items on display in Deering Library’s “Freedom for Everyone: Slavery and Abolition in 19th Century America” exhibition. The exhibition will remain up through the end of Fall Quarter.

When Charla Wilson and her colleagues reexamined the McCormick Library’s African American document collection, they were surprised to find a series of letters written by 19th century abolitionist Frederick Douglass.

“There really wasn’t much attention called to it,” said Wilson, the library’s archivist of the Black experience. “Frederick Douglass is a notable figure. We figured it would make sense to separate his letters into its own collection.”

In honor of Juneteenth, the letters are on display in Deering Library in the exhibition, “Freedom for Everyone: Slavery and Abolition in 19th Century America.” Second-year history Ph.D. student Marquis Taylor curated the collection, which debuted June 6 and will remain up through the end of Fall Quarter.

Taylor, a student-worker in special collections at Deering, said he began curating the exhibit in February. The idea for the exhibit stemmed from his work reexamining the African American document collection alongside Wilson and Jill Waycie, an archival processing specialist at the library.

The library considers new collections to digitize each year, Wilson said, and the African American document collection was among this year’s options. But Wilson said there was outdated, inappropriate language in the collection’s item-finding guides, and these archivist-crafted descriptions needed to be addressed prior to digitization.

Work began on that project in October 2021. The library made several changes to the collection, including updating the finding guides and changing the collection’s name to “Slavery, Enslaved Persons, and Free Blacks in the Americas.” Additionally, Douglass’s letters were given their own collection: the “Frederick Douglass Collection.”

This project and the subsequent exhibition were both part of the library’s broader Decentering Whiteness initiative, which seeks to identify and remove racist elements from library collections and center diverse voices.

A white donor gave both collections to the library, Waycie said, which led to renewed examination of their perspectives.

“These are items that come from that white-centered ownership feeling,” Waycie said. “We wanted to look critically at that and at what the materials themselves are saying, and who are we centering when we’re describing these materials?”

After working on the re-describing project, Wilson said increasing visibility and accessibility of older collections in the library became a new goal. She said displaying items from the Frederick Douglass and “Slavery, Enslaved Persons, and Free Blacks in the Americas” collections would be a way to achieve these goals and honor Juneteenth.

Taylor had experience working on archival collections prior to arriving at the University, working at one of the country’s largest libraries on African American history and culture as an undergraduate. Developing the Frederick Douglass exhibit was the first time he curated an exhibit at NU, he said.

While Juneteenth is a celebratory holiday, Taylor said he wanted the exhibit to reflect on the circumstances that led to the celebration: enslavement and abolition. He curated four display cases in the exhibit, including ones on Douglass, abolition, slavery and freedom.

Taylor sought to reflect each of these stages when curating the collection. Among the items in the Douglass display is a Bill of Sale, which Taylor said he included to remind viewers that even though Douglass was known for being an abolitionist, he was also an enslaved person who survived a “very dark path.”

“I was thinking about which items in the collection could best give us a sense of what that moment looked like,” Taylor said. “That was a part of the process and choosing items.”