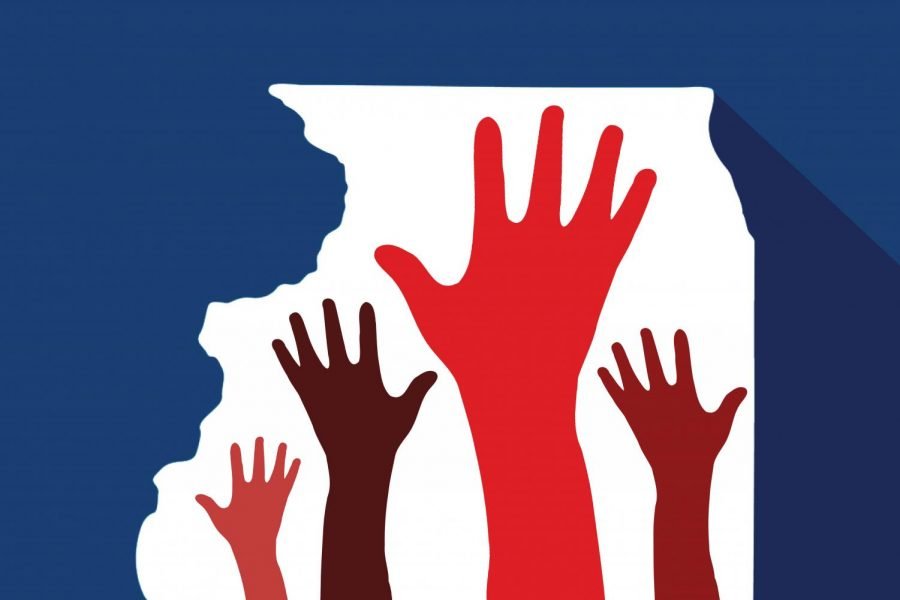 The proposed legislation would prevent “right-to-work” laws in Illinois.

With the Illinois Right to Collective Bargaining Measure appearing on the midterm ballot this November, workers have potential for a major win.

Although Illinois has not, twenty-seven states have enacted right-to-work laws. Some extend beyond union requirement, such as Kentucky’s 2017 law which states, “No public employee may strike or engage in a work stoppage.”

Josh Honn, a member of NULWU, said Illinois is “surrounded by right-to-work states,” including Indianna and Wisconsin. The amendment would prevent the spread of this legislation to Illinois, Honn said.

“We’re seeing in right-to-work states that most folks are losing wages and losing the ability to support their families and communities,” he said.

SESP junior Neva Legallet is a member of Students Organizing for Labor Rights, which has worked closely with campus unions since 2018.

“The labor movement has a lot of momentum right now,” Legallet said. “It’s the product of the fact that wages have been very stagnant for decades now, and yet the cost of living and inflation has grown faster and faster exponentially.”

She said while the movement is growing organically, legislation remains crucial to ensuring lasting change.

“You don’t really need the law to organize, but it helps to have that legal precedent,” Liang said.

Political science Prof. Daniel Galvin, who specializes in worker’s rights and labor politics, said the unionization process is “littered with obstacles” and “favors the employer at every turn.”

About 90% of workers do not have collective bargaining abilities, Galvin said, preventing employee negotiations.

“Low-wage workers are probably the ones who are most in need of rights and protections,” Galvin said. “They’re the ones who have turned to these small community-based organizations to recreate the kind of substantive rights that you might have otherwise gotten through collective bargaining agreements.”

These non-unionized workers see collective bargaining as the “gold standard,” he added.

According to Legallet, non-unionized workers at the University, like Safe Ride drivers, could benefit from Amendment 1.

The amendment has not avoided controversy, however. In April, two Chicago Public Schools teachers and two parents filed a lawsuit against the Illinois State Board of Elections to remove Amendment 1 from the November ballot. They claimed Amendment 1 conflicts with the National Labor Relations Act. A circuit judge denied the petition on May 26.

Although Amendment 1 applies to both the public and private sectors, private-sector employees are currently protected by the federal National Labor Relations Act. Amendment 1 would impact public-sector workers and provide additional protections to the private sector if the NLRA were appealed.

Bailey said many groups, such as the Illinois Policy Institute, have been spreading misinformation about the amendment, saying it would allow unions to raise taxes on taxpayers.

“I was a lobbyist for five years, wrote and passed a lot of bills. I never saw anything in this amendment that allows us to set the tax rates,” he said.

The amendment’s place on the midterm ballot is contingent on the lawsuit, Bailey said. He added that those unaware of the amendment may be key in the election’s result.

“What often happens with amendments like this is they can go unnoticed right up until the election.” Bailey said. “It will really be a battle of messaging for the voters to explain to them exactly what it is, and what it means.”

— In Focus: As workers across the country tackle pandemic-related obstacles, Northwestern’s labor force continues to clash with the University over unionization efforts