Cabral: In defense of the beach read 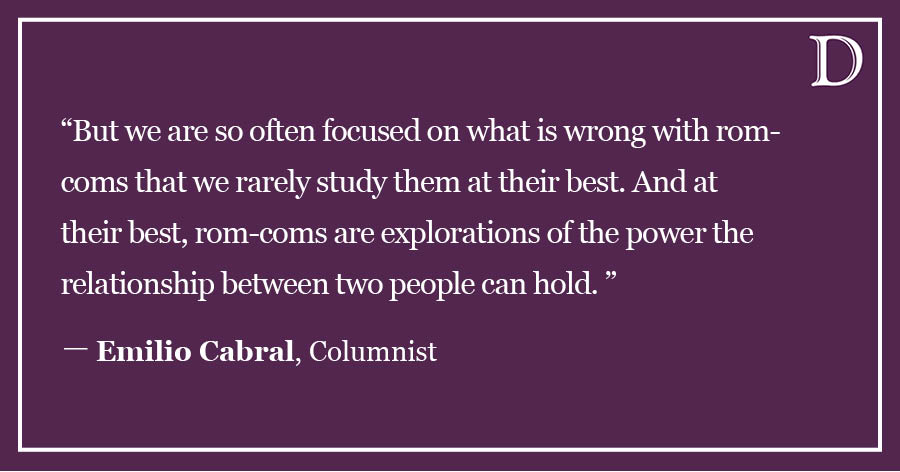 On Sunday, I went to the Barnes & Noble in League City, Texas for the first time in six months.

Aside from an expanded science-fiction section, the store was exactly as I remembered it: the nonfiction section at the front bursting to the brim with celebrity memoirs, vinyls of the latest Kacey Musgraves and Taylor Swift records tucked neatly in the back and popular romance books stacked on tables in the middle of walkways, angled so their cartoon covers caught the light just right.

It was at one of these tables where a white man wearing wire-rimmed glasses saw me standing, looked me up and down, wrinkled his nose and walked away, but not before shaking his head and muttering “shit on paper” under his breath. An insult which — based on the copy of Franz Kafka’s “The Metamorphosis” he was carrying — I could only assume was aimed at the rom-com in my hands: a copy of Emily Henry’s “Beach Read.”

Every reader has a section of the bookstore toward which they gravitate — a space in between two bookshelves where the rest of the world fades away. Some are drawn to historical fiction, while others make beelines toward fantasy books that immerse them in worlds that are the stuff of lucid dreams and ancient legends.

For me, it has always been rom-coms.

It’s easy to deride them as one-note. To claim the plots are always the same, the characters are merely caricatures of common tropes and their literary value is nonexistent. In fact, the term “beach read,” which originated in the 1990s, is often used as a derogatory term to encompass most rom-coms. As if their lighthearted storylines, constant presence in the tote bags of middle-aged women and the fact that they don’t take weeks to finish somehow diminish their value.

Many of these criticisms are true. I recently read “The Hating Game” by Sally Thorne, and it was a quick read with a nonexistent plot, stilted dialogue and a love interest who seemed much more like a stalker than a lovesick man who couldn’t express his emotions. Before that, I read “The Love Hypothesis” by Ali Hazelwood — a book that ignores the fact that a Ph.D. student and a professor are probably past the age when they believe fake-dating will fix all of their problems.

At their worst, rom-coms are formulaic and devoid of any real heart. People are thrown together in Chapter 1 and by Chapter 3 they are madly in love. The authors know their readers want a story that is relatively free of conflict, so they take it to the extreme, expecting readers to accept that love conquers all.

But we are so often focused on what is wrong with rom-coms that we rarely study them at their best. And at their best, rom-coms are explorations of the power the relationship between two people can hold.

In her novel “People We Meet On Vacation,” Henry weaves the tale of best friends Poppy Wright and Alex Nilsen. The story alternates between vacations they have taken in the past and the vacation they are currently on, creating a mosaic of past and present that immerses the reader in a relationship so full of love that it physically hurts to watch all the crossed signals between Poppy and Alex.

Henry and her peers cannot hide behind the complex lore of a world their readers do not know nor scientific principles their readers do not understand. In a rom-com like “People We Meet On Vacation,” the relationship between the love interests takes center stage. It has to be compelling enough to keep readers invested and complex enough to evolve throughout the course of the story.

There are so many bad rom-coms because the truth is, rom-coms are hard to write. When everything else is stripped away and you are left with two people who are supposed to love each other, there is no room for missteps or bad writing.

When a rom-com is good, the recycled plot lines and tropes fade away because all the reader can focus on is the way the characters look at each other. There is a beauty in the way they tilt their heads up to look at the stars, arms around each other, that nothing else can match. And it is that beauty that will keep me coming back time and time again.

Everyone is entitled to their own opinions and preferences when it comes to the media and books they consume. But this doesn’t mean any one genre of book is better than another. If you want to go to the beach and lounge in the sand with one of Henry’s three novels, then block out the sneers of the people who only read literary fiction and do it.

Emilio Cabral is a Weinberg junior. He can be contacted at [email protected]. If you would like to respond publicly to this op-ed, send a Letter to the Editor to [email protected]. The views expressed in this piece do not necessarily reflect the views of all staff members of The Daily Northwestern.