Fleetwood-Jourdain Theatre explores the Black experience with revival of ‘Home’ 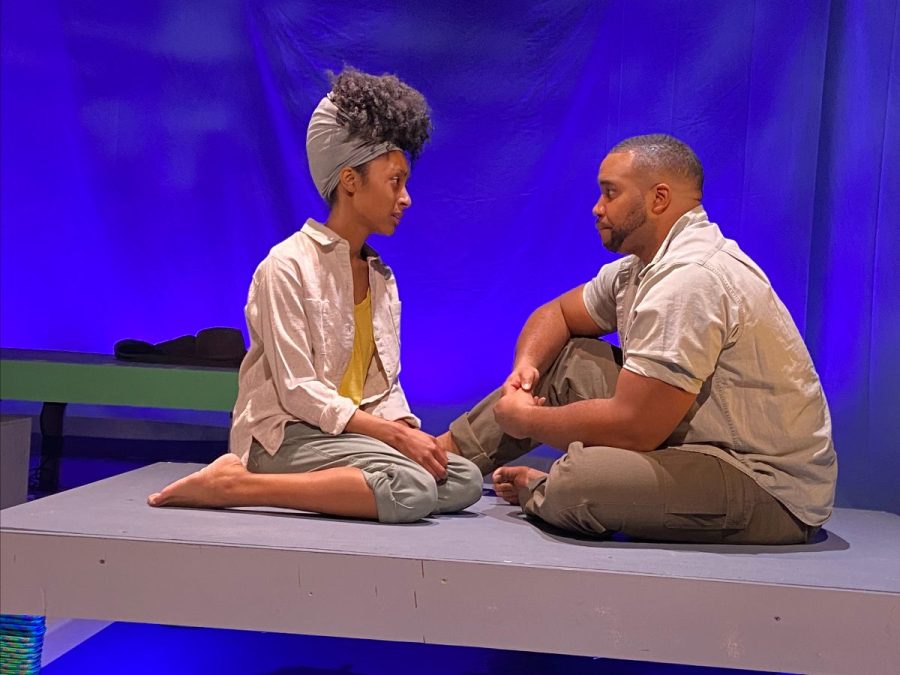 Rachel Blakes and Lewon Johnson in “Home,” a play that runs at the Fleetwood-Jourdain Theatre from June 4-19.

For actor Rachel Blakes, performing in her first in-person show since the start of the pandemic felt like returning to familiarity.

Alongside two other castmates, Blakes portrays multiple roles in the play “Home” at the historically Black Fleetwood-Jourdain Theatre through June 19.

“It was like going home,” Blakes said. “I haven’t been to this place that I love in so long and then to have the audience come in and complete our picture — it was just so heartwarming and the most special feeling ever.”

“Home” tells the story of a recently orphaned young man named Cephus Miles who contently works a family farm. After a series of misfortunes, he leaves his rural life behind to explore the city.

According to Artistic Director Tim Rhoze, the play embodies the American Traveling Tent Theatre style, which focuses on a barebones approach and less on costumes, props and set.

“We will focus on the lyrical writing, poetic storytelling, humor, heartbreak, redemption and amazing performances,” Rhoze said to Spotlight on Lake in May.

Blakes said they took on the challenge of portraying 11 characters, including a teenager, a drug dealer and an elderly aunt, with the support of her director and castmates.

“I admire the idea that you can go and have life happen to you and you can still hold on to the core of who you are,” Blakes said. “I admire her having that as a child because that’s not something a lot of teenagers have.”

The themes of the play are one of the reasons actor Lewon Johnson said the play is “a treasure” to the Black writing community.

He said playing Cephus allowed him to better understand playwright Samm-Art Williams in the historical context of Black theatre.

“It’s like reading or diving into your great uncle’s diary to understand how he sees the world in his time and day and then finding out just how much the world has grown or how it’s just the same,” Johnson said.

Portraying Cephus also encouraged a journey of self-reflection for Johnson, during which he said he evaluated his own choices and realized he is not alone when in doubt.

By stepping into Cephus’s shoes, Johnson said he also learned the importance of knowing oneself.

“There’s going to be a lot of things around us in today’s time that’s going to affect our emotions — changes, choices by other people, limitations, restrictions, freedoms — all of that has to play second fiddle to us knowing who we are,” Johnson said. “It allows us, seeing this play, to choose our battles wisely and to know when we need to save our bullets and when we need to let them fly.”

Blakes said more Black stories should be told through the lens of joy, which invites more nuance and discovery, rather than focusing on Black trauma as a selling point.

Cephus’s happy ending is one such example for Blakes.

“It’s really hard waking up every day living as a Black person in America, so I think we deserve to have moments that remind us of the joys of what it is to be Black,” Blakes said. “That is the truth of who we are, the truth of our culture — the truth of our community is joyful, loving, compassionate.”

Johnson said he believes those feelings have circulated amongst the cast and crew.

With weekly rehearsals since January, he said everyone has become a family.

“We found out that winning together mattered to us, which is what you do with a family,” Johnson said. “Your art and my art pouring into each other is making for a beautiful cocktail of life, memories and love. It feels like home.”

— Taking Back the Stage: Black artists celebrate their experiences in “BLACK JOY” showcase