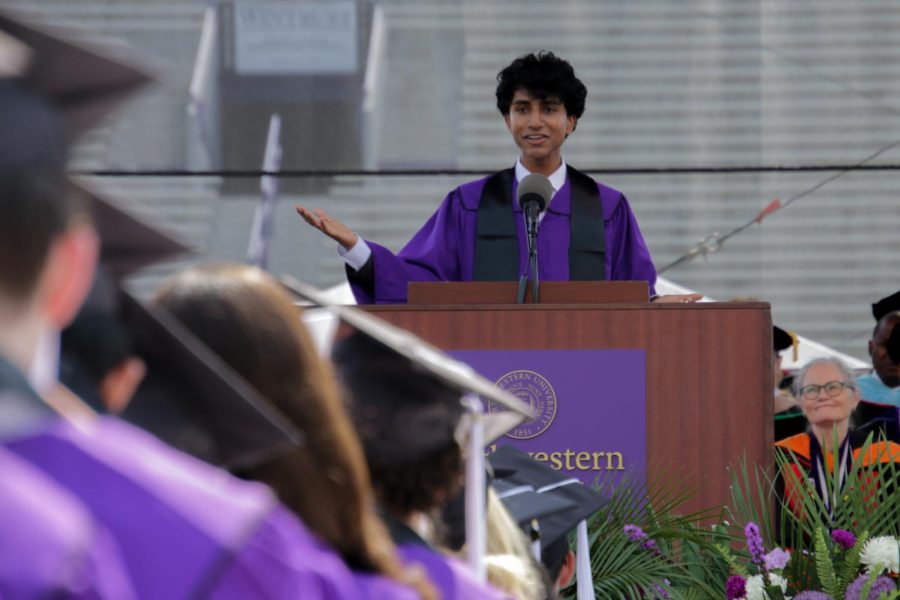 2022 Medill graduate Pranav Baskar. The Class of 2022 gathered in Ryan Field for the first in person Commencement ceremony since 2019.

Speakers called on Northwestern’s Class of 2022 to come together to work against national and global injustice Monday during the University’s first in-person Commencement since 2019.

Former New York Times reporter and bestselling author Isabel Wilkerson delivered this year’s Commencement speech. Wilkerson, who received an honorary degree during the ceremony, shared details about working on her books, “The Warmth of Other Suns: The Epic Story of America’s Great Migration” and “Caste: The Origins of Our Discontents.”

She also reflected on the impact of COVID-19 during the past three years, imminent injustices in the United States and learning to act with conviction. She received a standing ovation from the crowd for her comments on COVID-19’s unifying abilities.

“COVID sees all humans as fundamentally the same, it will infect anyone it has access to long enough,” Wilkerson said. “It sees what we have in common if humans don’t see it themselves. We are all in this together. And it is time we started acting like it.”

Wilkerson called out the ways the U.S. has failed to live up to its commitment to the value of life. She emphasized the need for “clear-eyed focus on threats to our democracy” amid a time marked by efforts to diminish voting rights and abortion access and “terror attacks” against marginalized people.

Wilkerson also shared lessons she learned while working on her books, from those she interviewed and from spending 15 years working on “The Warmth of Other Suns.”

“You define what is possible with the gifts that you’ve been given,” Wilkerson said. “Please banish the phrase imposter syndrome. However far your talents take you, that is exactly where you belong.”

Wilkerson was introduced by 2022 Medill graduate Pranav Baskar. Baskar drew a connection between Wilkerson’s books and his grandmother’s story.

Baskar recounted how his grandmother could not become an economist as she wanted, but instead became a housewife at 21 years old. He connected this story to the power imbalances Wilkerson addresses in her books, calling on his fellow graduates to recognize what went into their success and disrupt the “American myth” of exceptionalism.

“Our exceptionalism is not just our own,” Baskar said. “We are exceptional, but it’s because of every quiet injustice, every dashed hope, every moment of strife and every dead dream, but most importantly, every moment of love our ancestors invested into a generation they had not even met yet.”

2022 Weinberg graduate and student Commencement speaker Elizabeth Sperti urged students to approach their education and the rest of their lives actively and exercise agency.

Reflecting on the past four years, Sperti acknowledged the challenges the Class of 2022 faced during the pandemic, and the appreciation for one another that the pandemic encouraged.

“There has been so much to claim on this campus. From all the classes we fit into the quarter system, to the rich community created by our student organizations,” Sperti said. “And just as importantly, in the relationships with one another that have most intimately shaped our Northwestern experience.”

— NU to award honorary degrees to Board of Trustees Chair J. Landis Martin, commencement speaker Isabel Wilkerson, among others