Reel Thoughts: On feeling nothing after watching ‘Everything Everywhere All at Once’ and performative representation 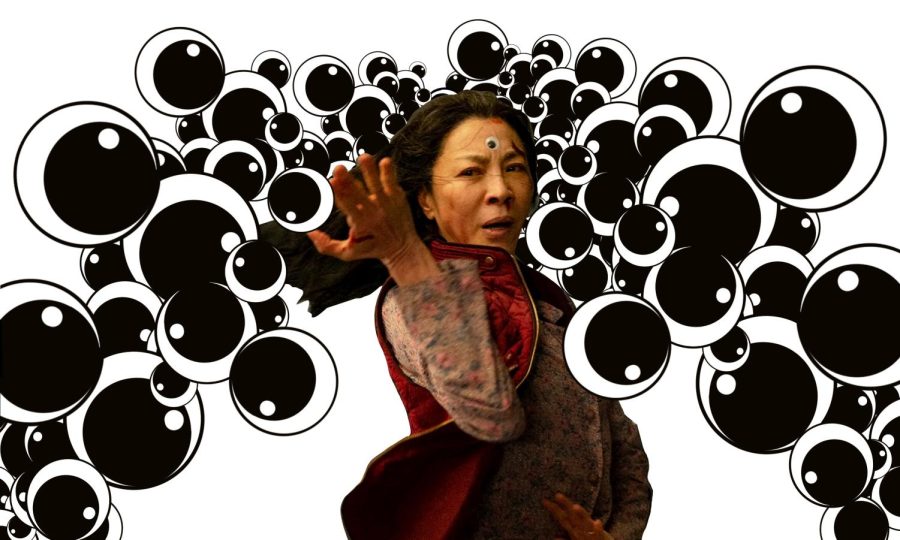 Evelyn Quan Wang (Michelle Yeoh) sees all in “Everything Everywhere All at Once,” but viewers may not see the point of the film’s absurdity.

To put it succinctly, “Everything Everywhere All at Once” is simultaneously overwhelming and lacking in substance.

We’d heard a lot about this film. Some people told us they cried for hours, others told us it changed their lives. So on a Sunday night, we showed up at a Skokie movie theater to see it for ourselves.

After not shedding a single tear among the four of us, we walked around in a dimly lit parking lot for half an hour in a bit of a crisis, wondering if we were emotionally numb. But after some discussion, we think the problem lies in the movie.

The dramedy centers around Evelyn Quan Wang (Michelle Yeoh), whose typical first-generation immigrant story completely implodes into a fantastical, high-stakes fight against world-ending destruction. When she and her husband Waymond (Ke Huy Quan) visit the Internal Revenue Service for an audit of their laundromat business, she discovers the world exists in a multiverse rapidly being consumed by an immensely powerful alternate version of her daughter Joy  (Stephanie Hsu) named Jobu Tupaki.

What follows is two-plus hours of multiversal leaps, intricately choreographed fights and familial reconciliations — but not a lot of heart. Despite stellar acting, the characters are shaky and we didn’t particularly connect to any of them. That extends into how we feel about the rest of the film.

The visuals are undeniably stunning, featuring brilliant action sequences and seamless transitions between reality and fantasy. But in its quest for captivating scenes, EEAAO abandons the plot. What could have been a strong narrative quickly becomes a distressing compilation of tearful moments, piñatas hanging from trees and a random raccoon who cooks.

The filmmakers place scenes meant to be heart-wrenching into broader sequences featuring apocalyptic bagels and hot dog fingers. Had these scenes been longer or less oddly situated, we might have cried, but it’s hard to shed a tear when said scenes are interrupted by a montage of rocks with googly eyes slowly shuffling around a cliff face.

In other words, this movie throws everything everywhere, all at once, at the viewer. And it becomes a little too much at times.

But the main reason this movie is so upsetting is its performative representation. Hollywood rarely features Asian American stories, so we felt excited by themes like the parental pressure to succeed, the disapproval of same-sex relationships and the mental health crisis among Asian American youth. The film also supposedly covers issues first-generation immigrants face like navigating U.S. taxes, keeping a self-sustaining business afloat and expressing love through language barriers.

But even with the representation of issues Asian American families face, the movie did not portray them in a way that felt unique or insightful. Whether we’ve seen or lived these issues before, EEAAO didn’t take an especially refined approach to themes like assimilating to U.S. culture.

Fellow peers told us about how excited they were to see themselves represented on the big screen, but these communities deserve better than half-established plot lines. It’s no longer good enough for Hollywood to merely further its diversity initiatives through actors who share the same identities. It’s time for them to actually spotlight the issues marginalized people struggle against with care and nuance.

We get what EEAAO was trying to do. Or at least we think we do. Those crazy montages were an attempt at absurdism, and the movie didn’t take those sequences too seriously to the point where they came across cringey. The multiverse is a cool strategy to convey the movie’s nihilistic themes. But it’s a confusing approach, which ultimately lacks the appropriate levels of care for the communities it tries to represent.