Sarraf: I had the time of my life fighting dragons with you 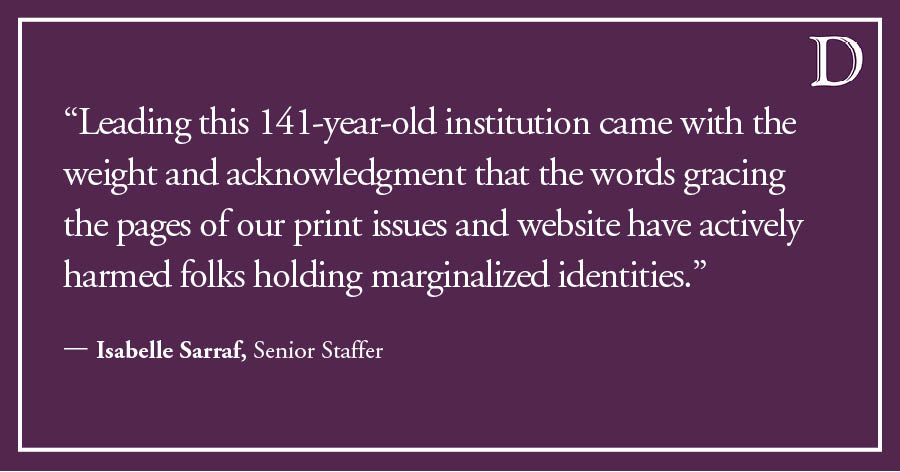 Journalism school doesn’t teach you what to do when your friends call you in a state of panic and agony because cops pepper sprayed them. Because K-9 dogs and officers in riot gear encircled a group of students protesting in the streets of our college town. Because our peer was thrown to the ground and arrested. Because they might just have to use the phone number you drew on their arm in Sharpie in case they were arrested, too.

A year before I took up the mantle as this paper’s editor in chief, I served as its campus editor during what I would call the most tumultuous quarter to run the section during my four years. Students were fed up with the University’s lack of response to the movement on campus and across the nation to abolish the police. So, in fall 2020, hundreds of Northwestern students marched through Evanston every single day for about a month, led by Northwestern Community Not Cops.

The Daily was there for almost all of those days. I was involved nearly every day, either arranging interviews, learning how to responsibly cover a protest, reporting on the field myself or editing from my off-campus apartment.

Looking back on that month of my life, much of it was a blur, but I’ll always remember the singular moments that came to define my time at this school and this paper: working until 4 a.m. in my living room to draft our initial feature on the protests, anxiously snacking on frosted animal crackers and hoping the work we were pouring ourselves into would amount to something; the hours of Zoom calls that ensued to comb through our stories line by line, ensuring we were accurately capturing the power imbalances at play; informing our readers with explainer after explainer, debunking the false rumors and misinformation spreading around campus (sometimes, by this institution’s own leaders); challenging those who sought to undermine the gravity of this movement on our campus; not sleeping a wink the night of Halloween.

I was and still am proud of our coverage from that quarter, because when I think about writing the first story that started it all, I think about the amount of care and the number of hours that my friends at The Daily and I put in to get it right this time. I think about the reporters and editors who stepped in night after night to cover protest after protest. I think about the students that put their lives on the line, fighting to make their voices heard to an institution that for so long did not — and, frankly, still does not — listen to them.

The Daily has a long-standing history of harming marginalized communities on campus and around the city. It is not only our duty to recognize that, but to rectify that. I came into the editor in chief job on the heels of two women of color leading the paper back to back, who made major strides toward addressing diversity and inclusion within our newsroom and our coverage. Their guidance during my three years at the paper meant everything to me, and our coverage of those protests all the better for it.

Leading this 141-year-old institution comes with the weight and acknowledgment that the words gracing the pages of our print issues and website have actively harmed folks holding marginalized identities. That was really difficult to reckon with. My biggest fear was dealing out even more harm to the communities I’ve come to embrace and that have embraced me over these four years. Suffice it to say, I’m extremely proud of the work that I’ve done here as both a reporter and an editor, and hope my work speaks to the time and care I’ve put into serving the Northwestern and Evanston communities.

Above all else, I’ll miss the people at this paper who were there by my side through it all, who supported and uplifted me every time I started to doubt myself — and every time I was confident we were doing something impactful.

To my Daily family and our dedicated readers: you are what made it all worth it.