Dey: Lessons from a newsroom in a pandemic 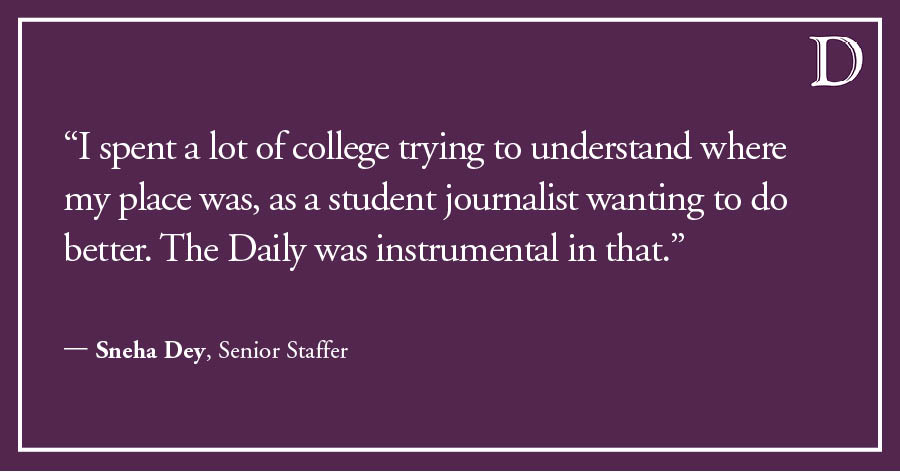 I’ve wanted to be a journalist since secondary school. I pictured maneuvering my way around a student newsroom as Rory Gilmore did in her cub reporter days. As a wide-eyed teen, I told family friends at the dinner table that I would use journalism to help people.

To be frank, Northwestern was a slap in the face. I learned quickly that journalism had a history of doing very little to help people. I learned how much harm generations of journalists had done — often parachuting into communities and then leaving. The Daily has its own history of harm, particularly when it comes to our coverage of survivors and communities of color.

I spent a lot of college trying to understand where my place was, as a student journalist wanting to do better. The Daily was instrumental in that. At one of the first all staff meetings I attended, members of the editorial board were leading a discussion about when to use the word “racist.” We made a commitment that day to not avoid the term. It was the kind of discussion that was glaringly missing from the Medill School of Journalism’s introductory curricula.

I’ve served as diversity and inclusion chair, city editor and editor-in-chief, among other roles. And in every role I’ve been in, I’ve been surrounded by a team that was so committed to responsible, inclusive journalism. We don’t claim to have all the answers, but we’ve been trying — whether that be holding workshops on intentionally covering communities outside your own or reimagining protest coverage when NU Community Not Cops started taking to the streets.

I also need to add — the newsroom I and my fellow staffers worked in looked nothing like the newsroom in Gilmore Girls. I worked my way up in the early days of the pandemic, when we were all remote. I was city editor when coronavirus first reached Evanston; residents were asking in Facebook groups whether they should be wiping down their groceries. I was editor in chief when most Northwestern students did not know when they would be eligible for the vaccine. I wrote headline after headline on a Zoom call, at my desk in my apartment on Noyes Street. I was going on socially distanced walks with editorial board members instead of packing ourselves into a tiny room on the third floor of Norris University Center.

I get asked a lot about what it means to attend school and run a newsroom though a pandemic. I don’t know if I can answer that because I don’t know a world otherwise. It’s hard to say whether the dread that pervaded my sense of self many mornings was because of the deadly virus — or, well, college. I do know, as social circles were forced to tighten, as headaches would set in because of Zoom brain, The Daily grounded me. Here was a place where I could tell the stories of Evanston residents and Northwestern students and staff — their pain and their joy. And I could tell those stories working alongside students and reporters who make me feel hopeful about the future of journalism.