Softball: No. 9 Northwestern’s WCWS run ends at the hands of No. 5 UCLA 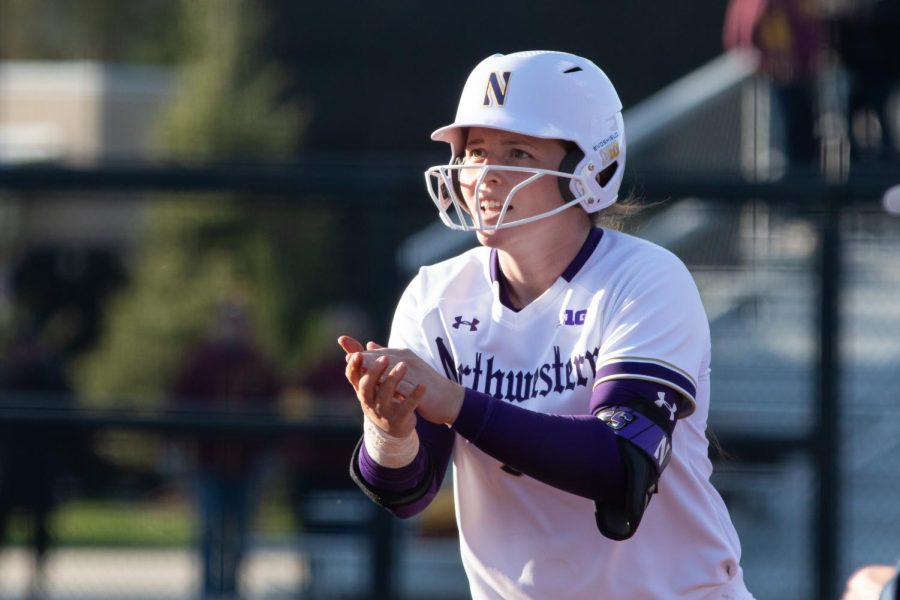 Catcher Jordyn Rudd looks on. As of Thursday, Rudd’s 15 postseason hits were an NCAA Tournament-best.

Like any story, Northwestern’s 2022 season had to end at some point.

The Wildcats’ (45-13, 19-4 Big Ten) postseason run finally reached its denouement Friday, with NU falling to No. 5 UCLA (49-9, 19-5 Pac-12) in an elimination game at the Women’s College World Series. Coach Kate Drohan said she was proud of the team’s effort, especially after playing top-seeded Oklahoma on Thursday.

“Our team emptied the tank. They were gassed, and I think they were still ready to play tonight,” Drohan said. “They gave every ounce of themselves to the game.”

The teams had already met in February, a game NU won 6-4 with a walk-off home run. The Bruins, who have made the WCWS more frequently than any other program, entered Friday’s game hoping for a different result.

UCLA got on the scoreboard first, courtesy of a one-out single from Delanie Wisz. Wisz was one of three Bruins to reach base that inning, but the Cats’ defense held them to one run.

NU struggled to generate momentum while batting. Senior center fielder Skyler Shellmyer singled through the left field gap, but was later caught stealing. UCLA pitcher Megan Faraimo ensured none of the other Cats reached base in their first plate appearances.

“When Megan’s back is against the wall, that’s when the fiercest competitor comes out,” Wisz said.

Meanwhile, UCLA started to build pressure. Senior pitcher Danielle Williams stranded runners on second and third base in the third inning before loading the bases in the fourth with one out. Junior left fielder Angela Zedak dropped a fly ball that allowed a run to score, but Williams again limited the damage, getting the Bruins’ Briana Perez to fly out before recovering from a 3-0 count against Wisz to strike her out.

In the fourth inning, the Cats’ offense started to warm up, putting two runners on base. The improvements carried into the fifth, as freshman second baseman Grace Nieto brought Zedak home with a double down the left field line. Shellmyer walked to load the bases, but up 3-0 in the count, graduate right fielder Rachel Lewis watched three nearly identical strikes go by from Faraimo to end the inning.

Then, in the very next at-bat, Faraimo knocked a 0-1 pitch into the left field stands. It was only her second career home run, and it came at a crucial time.

“I put Megan back into the offensive lineup … (because) good talent’s flexible,” UCLA coach Kelly Inouye-Perez said. “She is definitely a two-way player.”

Williams pitched the rest of the inning unscathed, but the momentum had shifted in the Bruins’ favor. After a 1-2-3 inning from NU, UCLA found three consecutive hits and multiple fielder’s choices to extend the lead to 6-1. Despite hits from Zedak and Nieto in the bottom of the seventh, the game ended with the same score.

Although their time in Oklahoma City was cut short, the Cats have still enjoyed one of their most fruitful seasons in a while, including their first WCWS appearance in 15 years and a Big Ten title. Drohan said this year’s squad reminded her of the 2006 national runner-up team, many of whom were cheering from the stands.

“Both the ʼ06 and ʼ22 teams were on a mission, not for themselves but for the program,” Drohan said. “(They) never felt like they were out of a game and never backed down from a challenge.”

Nieto acknowledged the traveling crowd as well, saying its presence “made it a lot easier for us to step foot on the field.” She also said the support she received from the team’s upperclassmen was a source of advice and encouragement.

Lewis, who has played her last game in Northwestern purple, said the 2022 season contained “some of the best moments of (her) life” and that she remains excited to watch as a fan in the future.

“I hope they learned how to lead from me, and I hope I set a good example for them,” Lewis said. “They have so much freakin’ potential, so they’re only going to get better from here.”

— Softball: No. 9 Northwestern can’t find answers in WCWS loss to No. 1 Oklahoma