Softball: No. 9 Northwestern can’t find answers in WCWS loss to No. 1 Oklahoma 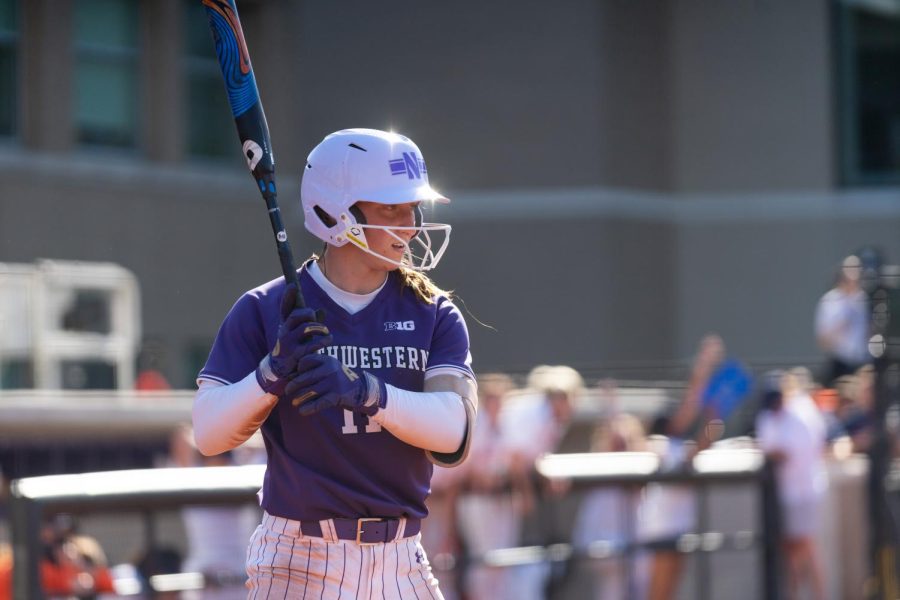 Rachel Lewis takes a batting stance. Lewis’ home run against Oklahoma was her school record-tying 23rd of the year.

Northwestern’s appearance in the Women’s College World Series, its first since 2007, marked an opportunity for the Wildcats to prove this year’s squad was as good, if not better than it was 15 years ago. But top-seeded Oklahoma did not give NU a warm welcome back.

“They’re a very good lineup,” senior pitcher Danielle Williams said. “Everyone here is a good hitter. I just needed to be confident in my pitches.”

After two scoreless innings, graduate right fielder Rachel Lewis latched onto a Trautwein pitch and drove it beyond the left field fence. Lewis tied a school record with her 23rd home run of the season.

“It was a good little spark,” Lewis said. “We needed to ride it a little more.”

Oklahoma’s offense came alive in the bottom of the inning. The Sooners first tied the game with back-to-back hits on only three pitches.

After a few more at-bats, Oklahoma’s Tiare Jennings established a four-run lead with a grand slam. Her home run marked a turning point — Oklahoma had finally learned how to deal with Williams’ change-up.

The Sooners weren’t done there. Rylie Boone drove in one more run before the inning ended, leading Drohan to replace Williams with senior pitcher Lauren Dvorak.

“We took Danielle out because the inning was so long and she needed a break — a physical break and an emotional break,” Drohan said. “It wasn’t like she was done for the day, but … we had to let her have a breather.”

After a 1-2-3 inning from the Cats, Oklahoma’s offensive onslaught continued, as Grace Lyons hit a two-run single off Dvorak. After an umpire review, a hit-by-pitch ruling extended the lead to 9-1.

In the same inning, Jana Johns put an exclamation point on the Sooners’ performance, recording the team’s second grand slam of the day, this one against junior pitcher Sydney Supple.

With two outs in the top of the fifth inning, Oklahoma replaced Trautwein with Jordy Bahl, another NFCA First Team All-American. Bahl allowed the next two hitters to reach base, including an RBI single from senior shortstop Maeve Nelson, but it was a consolation run. The Sooners’ ace retired the next batter, dealing NU a 13-2 loss.

“To give up one hit against a team that can swing it is very impressive,” Oklahoma coach Patty Gasso said. “(Trautwein) handled herself very well.”

The Cats’ loss sets them up for an elimination game Friday against No. 5 UCLA (48-9, 19-5 Pac-12). The two teams squared off earlier in the season, when a three-run walkoff home run from Nelson gave NU a thrilling victory.

According to Lewis, the Cats are ready to face the Bruins a second time.

“All eyes are on the game tomorrow now,” Lewis said. “We just got to put that one behind us.”