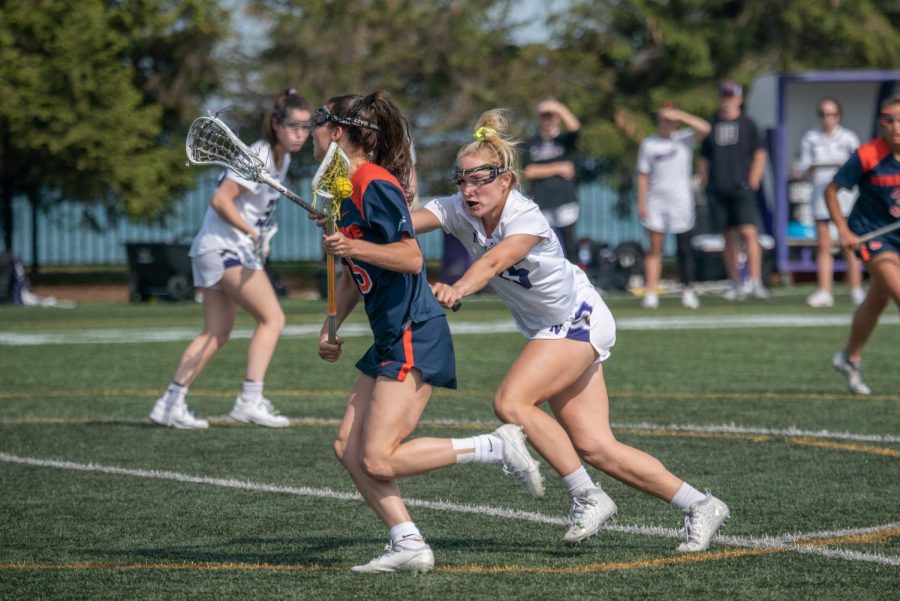 After a shell-shocking loss last May in the NCAA Division I Women’s Lacrosse Quarterfinals, Northwestern stepped on Homewood Field in Baltimore, MD seeking redemption.

With one of the key leaders, senior attacker Izzy Scane sidelined this season with an ACL injury, the road to Championship weekend has been far from smooth sailing. But, graduate attacker Lauren Gilbert and graduate midfielder Jill Girardi stepped up to the plate, being the top two leaders for the Wildcats this season.

However, NU (16-4, 5-1 Big Ten) had their biggest challenge to date Friday against the undefeated North Carolina (20-0, 8-0 ACC) on the biggest stage of the collegiate lacrosse season. Receiving a 20-9 loss to the Tar Heels in March, the Cats had a chip on their shoulder entering into the matchup.

From the first draw, NU skyrocketed into high gear, scoring a goal a minute into the first period. The Cats’ offensive continued rolling, achieving a 6-0 run with four different players getting on the scoreboard.

But, the momentum shifted when the matchup was halted over ninety minutes due to weather delays in the area.

When the game finally resumed, North Carolina gained the upper hand, forcing more turnovers on NU’s offensive possessions. As a result, the Tar Heels ended up cutting into the Cats’ six point lead with two goals. Once again, Gilbert stepped up to the challenge, responding with a goal of her own.

Northwestern freshman midfielder Samantha Smith followed Gilbert’s footsteps after scoring on a free position shot to close the first half. With a six point advantage, NU proved early into the battle its intentions of going to Championship Sunday.

The Cats continued their run at the start of the third quarter with a three goal run behind Gilbert. Despite North Carolina’s goalie change, NU was not phased and still had scoring success across the eight meter.

Although the squad had a significant lead, the Tar Heels were attempting to get back into the game late into the third period. With sophomore defender Kendall Halpern sitting out with a yellowcard, North Carolina capitalized on the opportunity and cut the Cat’s lead to five. Similar to the end of the second quarter, Gilbert and Girardi responded back and added some extra cushion to their lead.

But, the Tar Heels would give the Cats more difficulty in the fourth quarter when graduate attacker Jamie Ortega and freshman attacker Caitlin Wurzburger worked together to put some goals on the board. With 7 minutes remaining in regulation, North Carolina was down by just five goals and had a woman-up advantage.

NU fell short handling the Tar Heels’ changes on the draw circle with graduate attacker Andie Aldave. The Cats’ history breaking lead over North Carolina in the first quarter completely diminished with the score all evened up with under three minutes remaining.

Only a minute left, North Carolina scored and took the lead to advance to Championship Sunday.

From the beginning of the game, Doucette was a defensive force to be reckoned with for North Carolina. The fourth year goalie recorded six saves and blocked the Tar Heels’ star attackers Jamie Ortega and Caitlyn Wurzburger. Her presence inside the cage contributed to the Cats’ offensive success on the other end of the field. The squad’s success in this entire matchup was due to Doucette’s saves and stops at the goal.

The Cats dominance inside the draw circle generated offensive momentum

Girardi and the midfielders in the circle played a central role in giving the Cats the upper hand the entire battle. Winning in draw controls 12-6, NU’s dominance in the midfield was an area the program struggled with during the regular season matchup against North Carolina. In Friday’s game, the squad’s success gave the Cats the advantage on the offensive end of the field and limited the Tar Heels’ scoring opportunities.

Northwestern spent most of the fourth quarter on defense allowing the Tar Heels to get back into the game and take the lead for the first time with a minute left. The changes in the draw circle and the lack of pressure on defense led the squad to suffer another loss to undefeated North Carolina.