The Daily Northwestern • May 27, 2022 • https://dailynorthwestern.com/2022/05/27/campus/a-year-in-review-asgs-landmark-achievements-from-this-academic-year-and-priorities-for-the-fall/

A year in review: ASG’s landmark achievements from this academic year and priorities for the fall 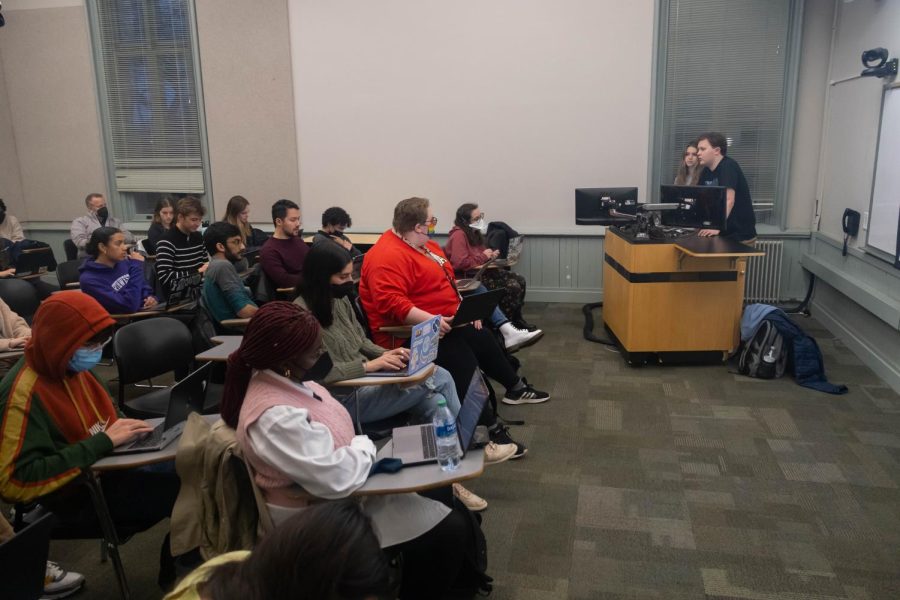 In the past academic year, Associated Student Government initiatives have ranged from serving ice cream in dining halls to implementing internal reforms to make ASG more accessible for campus activists.

As the legislative body looks toward next year, ASG President Jason Hegelmeyer said liaising with administrators during a transitional period for the University will be a priority.

This summer, Rebecca Blank will replace Morton Schapiro as university president, and Patricia Lampkin will take over for Julie Payne-Kirchmeier as interim vice president for Student Affairs.

Hegelmeyer said he was encouraged when reading about Lampkin’s history of working with student groups in her previous role at the University of Virginia.

“It seems like she really is interested in student advocacy and working with students on projects,” Hegelmeyer said. “Everyone in admin is eager to help support us in that transition and make sure that ASG is prioritized as a voice.”

Making ASG more accessible to student groups has been a major point of internal reform for ASG this year, Vice President Donovan Cusick said. The group has lifted previous rules that barred organizations who were not recognized by ASG and its Student Activities Finance Committee to gain Senate representation.

Eliminating these rules has allowed groups like Fossil Free NU to hold a Senate seat.

“One of the biggest things I’m most excited about was…dismantling some of the systems that are ultimately built on whiteness and protecting whiteness,” Cusick said. “Those come in the forms of changes that we’ve made to the coding constitution and just the general bureaucracy and red tape that surrounds many ASG processes.”

Chief of Staff Stephanie Shields said she hopes to continue increasing ASG visibility by updating the group’s handbook. The document, which explains how ASG can be a resource for NU students, has not been updated since 2014, Shields wrote in a statement to The Daily.

“I’m excited to create a new handbook to try and make ASG more understandable and accessible to the Northwestern community,” Shields said.

Weinberg senior Karina Karbo-Wright, former executive officer of justice and inclusion, has organized social justice retreats for ASG’s executive board and workshops for each committee.

While the role has been valuable in furthering social justice education in ASG, Karbo-Wright said an eventual goal should be for the role to no longer exist as social justice work is reintegrated into all of ASG’s efforts.

“People don’t associate government with having to have social justice knowledge, especially as a leader,” Karbo-Wright said. “When you don’t… have a critical lens, you’re going to inadvertently harm people, and we’ve seen that happen in ASG’s history.”

Throughout the academic year, ASG has worked to include COVID-19 recommendations to the University in its meetings.

In February, ASG passed legislation recommending the University reinstate its weekly testing requirements amid a surge in positive cases. Senators cited risks to immunocompromised and disabled students, as well as overcrowding Quarantine and Isolation Housing at 1835 Hinman Ave.

Senators also voted at the February meeting on an amendment to ask the University to provide at-home COVID-19 tests when they became available. Although the legislation did not result in increased testing, Campus Life Chair and McCormick sophomore Marcos Rios said the University eventually began providing more resources to students, such as free KN95 masks.

Hegelmeyer said he plans to continue centering students’ wellbeing into the fall, regardless of the COVID-19 positivity rate.

“We just wanted to make sure that PPE is available for students that want it and making sure we’re figuring out how we can support and protect immunocompromised students,” he said.

In March, ASG unanimously passed legislation allowing senators to vote to close some meetings, meaning the content  is confidential and cannot be reported. The policy, which was an amendment to ASG’s code, was originally proposed and tabled in January after student publications voiced concerns.

If two-thirds of the senators voted to make a meeting private, all non-ASG members are required to leave the room. However, ASG will provide meeting minutes to journalists.

Hegelmeyer said he backs the policy because it protects students’ privacy and safety when they speak in meetings, citing last year’s resolution on the Israel and Palestine conflict.

“If… student journalists are really being prohibited from closed meetings, that’s something we definitely could reconsider, we could revisit, but at the time being, it really has never been implemented at all,” Hegelmeyer said. “I don’t really think at the moment it’s a real pressing issue.”

ASG also made headway this year with several initiatives aiming to support students of marginalized identities. Last month, the University announced it had identified a mid-term, expanded space for the Gender and Sexuality Resource Center. The decision comes a year after ASG passed legislation proposed by Rainbow Alliance to relocate the GSRC to a house on Sheridan Road.

This fall, a grant for Indigenous and Native American students will also go into effect, after a year of work by ASG’s Senate and executive board. Hegelmeyer said the grant will be fully operational for a fall application cycle.

ASG is also soft launching a dining dollar and meal swipe donation program, Cusick said. The program allows students with excess dining dollars to donate them toward a larger pool which will be redistributed toward food-insecure and low-income community members.

Karbo-Wright said the group also organized a holiday drive this year which raised more than $3000 in mutual aid to support students, staff and Evanston residents. She is also working on initiatives to create more inclusive campus seating for fat community members and reforming the social justice True Northwestern Dialogue for freshman orientation.

While it is too late to reform the orientation dialogue for this coming year, Karbo-Wright said ASG’s work led NU to train Peer Advisers further ahead of the session and implement changes for the following school year.

“They’ll hopefully be able to change the activity and try to do something new so that folks are still… thinking about social justice for the first time, but they’re not doing it at the expense of marginalized people having to share their sometimes traumatic experiences with their identity,” Karbo-Wright said.

Rios said he sees one of ASG’s responsibilities as serving as an institutional space for students to voice their concerns. As students graduate, many of their advocacy priorities lose traction, he said.

ASG has not historically been a “justice-oriented” organization, Rios added, so a priority of the incoming ASG administration is creating more space for marginalized students within the body.

“No one person can handle all of (NU), and it is such a battle advocating for yourself when you’re constantly receiving pushback from administration, from staff, from students,” Rios said. “It is so difficult to carry that on your back, and that is… what ASG should do, be the people that can carry that for you.”

— ASG moves forward with diversity and accessibility initiatives this fall