The Daily Northwestern • May 27, 2022 • https://dailynorthwestern.com/2022/05/27/ae/comedians-patti-harrison-sarah-sherman-entertain-as-spring-speakers-for-joint-ao-sherman-ave-event/ 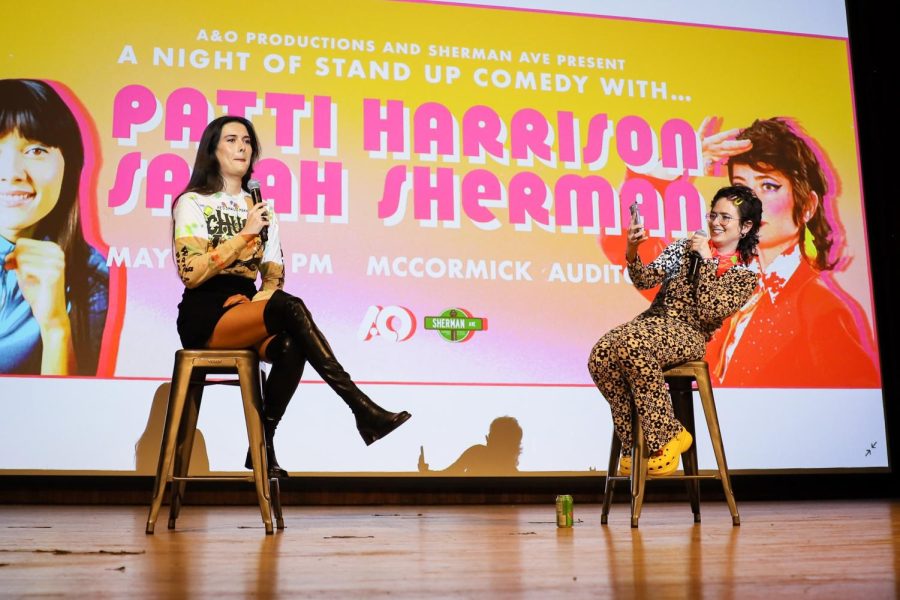 Comedians Sarah Sherman (Communication ’15) and Patti Harrison have faced all sorts of crowds before, but they succeeded at a particularly difficult task Wednesday night: eliciting laughs from an audience of Northwestern students with final exams on the horizon.

A&O Productions and Sherman Ave. hosted the pair of entertainers in a sold-out show in McCormick Auditorium.

“Having Sherman Ave. as a collaborator for the event was really important to us,” A&O Director of Speakers and Communication junior Noah Rabinovitch said. “We are not the arbiters of what is and isn’t comedy here.”

Currently a cast member on “Saturday Night Live,” Sherman also performs under the name Sarah Squirm and was previously a writer for “The Eric Andre Show.” Harrison, who Rolling Stone described as “poised to become the most visible working trans comedian in America,” is known for her writing contributions on Netflix comedy series such as “Big Mouth” and “I Think You Should Leave with Tim Robinson.”

Rabinovitch said Sherman had long been on A&O’s radar as an NU alum, and he and many other members of his department were fans of Harrison’s work.

“When we found out they were friends and that they’re represented by the same agency, it was a no-brainer,” Rabinovitch said.

Two student comedians, Communication sophomore Arjun Kumar and Weinberg senior Alex Turntine, were the opening acts. Rabinovitch said others in his committee had scouted Kumar and Turntine at previous on-campus stand-up events and were impressed with their “budding comedic presence.”

Harrison took the stage next. She delivered semi-sarcastic deadpan remarks on an assortment of topics, from comedic inspiration during the COVID-19 pandemic to Ariana Grande’s race-baiting controversies, suggesting that the singer should try putting chopsticks in her hair.

“I’m half-Asian,” Harrison said. “If she’s having a rough day and she wants to take it for a spin, she has my permission.”

Harrison involved attendees in her set several times. She acknowledged one of Kumar’s stories to begin her own anecdote about Asian-American family experiences, led a personalized chant of the Pledge of Allegiance and involved audience members in clapping to parody music in the styles of Dua Lipa and Stevie Nicks.

Sherman was last to take the microphone. She reminisced about her time as an undergraduate on many occasions, criticizing fraternities, remembering rejections from improv groups and recalling an unsatisfying sexual encounter on North Beach. At one point, mentioning an experience involving blacking out, Sherman added, “You guys know about blacking out because you just had Dillo Day.”

She also joked about her identities throughout the night, making light of her background as a Jewish Long Islander. Sherman performed a lengthy bit in a New York accent and made frequent references to her own body and appearance.

“If a woman with a queer haircut gets on stage and you don’t say ‘slay,’ you’re not an ally,” Sherman said.

The event concluded with both Harrison and Sherman answering questions from A&O and Sherman Ave. staff. Due to a delayed start, there wasn’t time for a long Q&A session, but Rabinovitch said he enjoyed the opportunity to “watch the two of them … just be besties on stage together.”

For Communication first-year and A&O Speakers Committee Member Brett Toban, who advocated for bringing Harrison to NU after seeing her at a show in Los Angeles, both performances met his high expectations.

“I love both of these people, so it was a blast,” Toban said. “(The show) fully lived up to everything.”

Correction: A previous version of this article mischaracterized a student performer’s involvement in on-campus improv or sketch comedy groups. The Daily regrets the error.