The Daily Northwestern • May 26, 2022 • https://dailynorthwestern.com/2022/05/26/city/city-historical-organizations-celebrate-preservation-month/ 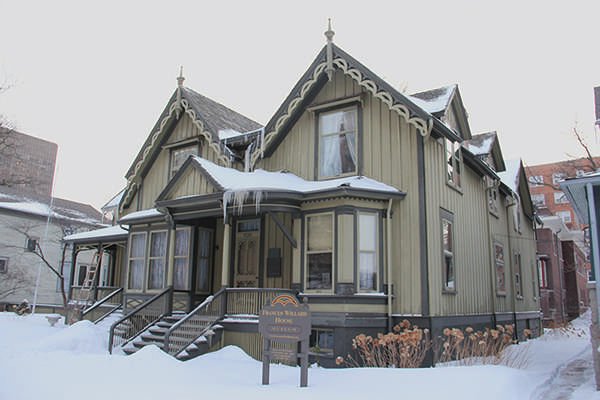 The Frances Willard House Museum. The national historical landmark reopened to tourists on May 19 as part of the Evanston Preservation Commission’s Preservation Month.

On May 14, residents gathered at Edwin B. Jourdain Jr. and Lorraine H. Morton’s homes to honor these sites in a milestone of this mission. The event was part of the Evanston Preservation Commission’s Preservation Month 2022: “People Saving Places” celebration. Throughout May, the commission is hosting several events across the city.

Shorefront Legacy Center invited community members to designate historical places they view as vital to the community before reviewing the suggestions in a committee, according to  co-Founder Morris “Dino” Robinson.

Robinson said he hopes this process will help residents regain agency in telling the area’s history as they know it.

“When you have groups or institutions who are unfamiliar with a population (that) are attempting to tell that story, they may not understand the nuances and particulars of this particular community,” Robinson said. “We want to put that control back in the power of the community, so that they determine what’s important. They write a narrative and justify it on their own terms.”

A former resident of one of the sites honored at the event, Lorraine H. Morton was Evanston’s first Black mayor. She began her career as a teacher at Foster School in 1953 and served the Evanston community for more than 50 years. Robinson said Morton advocated for economic growth in the downtown area during her administration.

In 1931, Edwin Jourdain — a former resident of the other heritage site — became Evanston’s first Black alderman, a position he held until 1947. Robinson said Jourdain was a driving force in the struggle against the city’s Jim Crow policies, desegregating movie theaters, public beaches and other public spaces.

Six additional Heritage Markers will be placed on sites in Evanston by the end of the year, Robinson said.

The designation of the historical markers was the first of three events held in Preservation Month. On May 12, the History Center hosted a presentation by transit historian Walter Keevil about the Yellow Line, and on May 19 and 22, the Frances Willard House, a national historic landmark, reopened for in-person tours.

Willard, a former educator and suffragette, was a founding member of the Woman’s Christian Temperance Union, which began in 1874. She faced criticism from anti-lynching activist and journalist Ida B. Wells, who said she used stereotypes of Black males misusing alcohol and attacking women to gain support for WCTU concerns in the South.

Lori Osborne, director of the Frances Willard House Museum, said although Willard was not a perfect leader, she promoted women’s rights and their quality of life. Osborne added that visitors are urged to take a close look at Willard’s life to understand the complete story of her work.

“At this particular moment in our history, we are grappling with what it means to honor leaders in our past,” Osborne said. “We’re trying to come to some understanding where we can really face the truth of people’s leadership, but while still recognizing them for the wonderful work that they did.”

Carlos Ruiz, the city’s preservation coordinator, helped organize Preservation Month. He said he hopes this month’s events can help citizens become more aware of the variety of people who contributed to Evanston’s culture and history.

With Preservation Month coming to an end, he hopes people will continue to learn about their own community’s history.

“Evanston has long prided itself in being a very diverse community,” Ruiz said. “So we try to make sure that we recognize everybody who has contributed regardless of their race or religion or ethnic background.”