The Daily Northwestern • May 26, 2022 • https://dailynorthwestern.com/2022/05/26/campus/as-northwestern-aids-community-members-affected-by-ukraine-crisis-some-students-say-support-for-other-countries-is-lacking/

As Northwestern aids community members affected by Ukraine crisis, some students say support for other countries is lacking 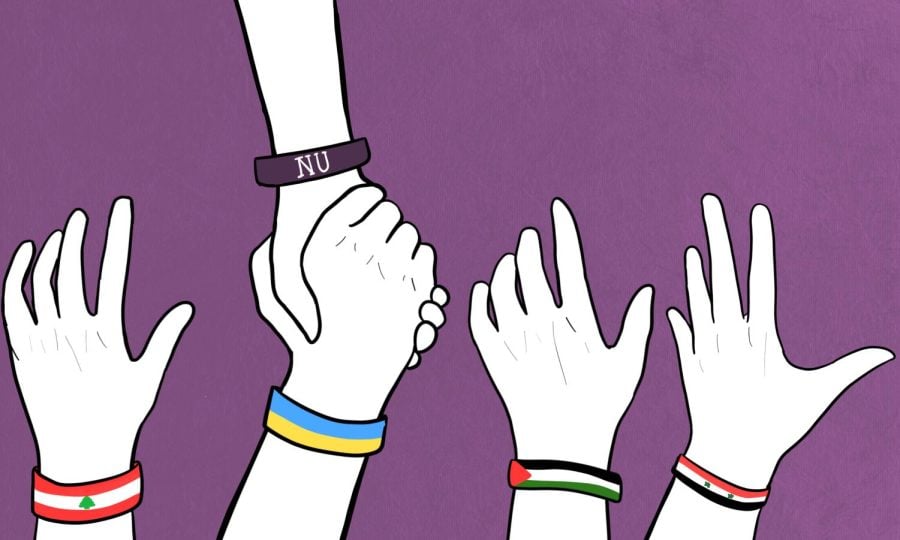 Northwestern has started a number of programs to support students and faculty impacted by conflict situations following the Ukraine crisis, though some international students from other countries affected by war and violence said they do not receive the same support from the University.

Iryna Rekrut will travel from Kyiv, Ukraine to Evanston in September to pursue an international human rights fellowship at the Pritzker School of Law. She was one of several applicants from Ukraine and other nations permitted to apply outside the regular application cycle due to instability in their home countries.

This opportunity is one of several initiatives Northwestern is launching to aid students and scholars affected by violence or disaster. But as the University has sponsored a string of Ukraine-related panels and aid initiatives in the past few months, some students from countries like Lebanon, Syria and Palestine say they have not received similar support from NU.

In addition to an extended application process, the Buffett Institute for Global Affairs is funding living expenses for students unable to return home this summer and hosting virtual scholars from Ukraine.

Rekrut said she is excited to travel to the U.S. and learn more about human rights.

“I want to learn what other people are facing. I really want to share Ukrainian cultures, Ukrainian heritage, to really get people to know what it is like from firsthand,” she added.

Rekrut will live with Pritzker Director of Graduate and International Program Admissions Mary Beth Busby, who helped establish the initiative allowing Ukrainian students to apply outside the regular application cycle.

Looking for more ways to help, Busby added she offered to host Rekrut on a whim.

“It was a gut, almost a knee-jerk reaction,” Busby said. “I felt like I wanted to do something. You’re donating a couple dollars here and there, but really, there’s no tangible way to help. This seemed like an opportunity.”

NU is also working to support students who remain in Ukraine.

Buffett Institute Executive Director Annelise Riles said professors in the Bienen School of Music have reached out to classical music students in Ukraine to offer virtual coaching and advising to doctoral students who are unable to attend school.

“Our faculty have just stepped up on their own without any financial support or really any organization and just done the right thing,” Riles said.

Other students affected by unrest report lack of aid

NU has not hosted any similar program to support students affected by violence in other countries like Afghanistan and Ethiopia, Riles said. She said this is partly because the COVID-19 pandemic provided the Buffett Institute the tools to host virtual visiting professors for the first time.

However, the Taliban took over Afghanistan in August 2021, which was more than a year after NU students started virtual classes.

But some students say these forms of aid are not widely advertised.

A Weinberg freshman from Syria, who asked to remain anonymous for safety reasons, said they did not receive any communication about summer aid programs or violence-related support from the University.

“As a student coming from war, there wasn’t any support or mention of what’s happening there,” they said. “Nobody talks about the Syrian war. It’s normalized for Middle Easterners to live under tragedy, but when something happened for Ukraine, places like Syria, Iraq and Palestine were just ignored.”

As a prospective student, they said they were not informed of any opportunity to apply outside the regular application cycle or submit unofficial documents in place of official transcripts or test scores, even though potential applicants from Ukraine were allowed to do so this year.

“My family is still living under war,” they said. “We’re not treated equally to Ukranians. We’re still seen as inferior to white people, and we still do not deserve the same rights of safety or access to normal things. Living a normal life is just not really seen as our right.”

They added they would’ve appreciated receiving communication from NU about summer funding opportunities or extended deadlines.

McCormick freshman and Daily Op-ed Contributor Wahib Charamand is from Lebanon, where the value of currency has deflated dramatically in recent years, making it difficult for him to access any money his parents had in banks for savings. He said using money from Lebanon abroad means losing 80% of its value.

Charamand added there is also significant unrest in Lebanon, making it difficult for him to return.

“We’re taking a big hit on the value of our money to be able to pay tuition,” he said. “There were elections a week ago that made everything very unpredictable. The vibe of the country is very, very different than the way I left it. It’s deteriorated very fast.”

Charamand said he did not receive any communication from NU about special programming available for international students impacted by instability. He will be returning to Lebanon this summer and said he would have looked into an opportunity, had he known about it.

Riles said more than 20 NU professors have signed up to host Ukranian scholars in their classes to lecture virtually or conduct a remote project with Ukrainian students. This allows the Buffett Institute to pay professors who currently cannot work in Ukraine an honorarium and provide them with financial support, according to Riles.

She said more than 200 scholars from Ukraine applied to teach at NU virtually.

Though the institute originally planned to bring Ukrainian scholars to NU’s campus, Riles said she was surprised to hear most Ukranian professors wanted to stay in their country.

“It’s an act of intellectual sovereignty to say, ‘We’re still here and we’re going to keep going,’” Riles said. “But that’s hard to do when your university has been bombed or you’ve been displaced for different parts of the country. So we set up a really innovative program.”

Riles said the Buffett Institute has hosted scholars from countries other than Ukraine in the past, citing an initiative earlier this year with Pritzker to bring visiting scholars from Afghanistan to NU.

Through this program, NU hosted just one scholar from Afghanistan, Najia Mahmodi, chief prosecutor for the Attorney General’s Office of Afghanistan. Yates said NU has funded and invited three additional scholars from Afghanistan, but they have been unable to reach Chicago so far.

Medill junior Mubarak Hassan, a member of Students for Justice in Palestine, said he wishes the University provided curriculum-based support, like teach-in and visiting scholars, for Palestine.

He also said the University did not respond when Al Jazeera journalist Shireen Abu Akleh, a Palestinian American, was recently killed while covering an Israeli Defense Force raid. While the IDF has maintained Akleh was caught in crossfire, an independent CNN report found the attack was likely a targeted move by Israeli forces.

“Medill has hosted a number of panels discussing the Ukrainian crisis, but when a prominent Palestinian journalist was killed, we didn’t have those kinds of panels or those moments of grief at an institutional level,” he said. “Ukraine is getting the attention it deserves, while other countries go silenced and ignored.”

This story has been updated to include additional comment from the University about visiting scholars from Afghanistan.

— Northwestern for Ukraine uses art to raise funds and awareness