The Daily Northwestern • May 26, 2022 • https://dailynorthwestern.com/2022/05/26/ae/water-by-the-spoonful-tells-pulitzer-prize-winning-story-about-addiction-family/ 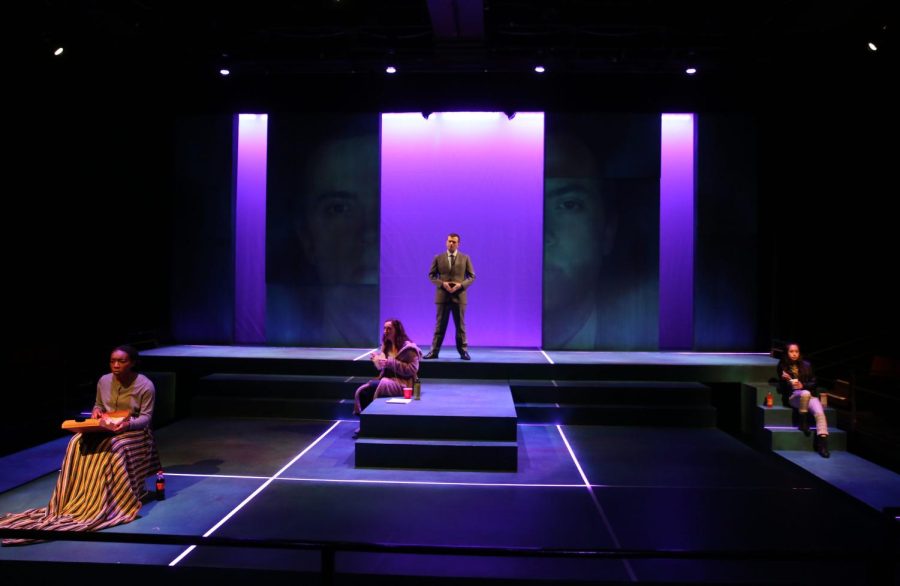 ‘Water by the Spoonful’ is a Pulitzer Prize-winning play that follows characters struggling to recover from addiction and trauma.

Content warning: This story contains mentions of PTSD and addiction.

The Virginia Wadsworth Wirtz Center for the Performing Arts premieres a production of the Pulitzer Prize-winning play “Water by the Spoonful” Thursday through Sunday.

The show tells the story of American war veteran Elliot Ortiz, who suffers from PTSD after returning from Iraq, and his mother’s anonymous chat room for recovering cocaine addicts. Director and third year MFA student Ji Won Jeon said the play asks what it means to be a family and what happens when family members fail each other.

“This production tells the audience we’ve still got a chance to actually correct things,” Jeon said. “Our loved ones will always forgive us, and we should do the same for ourselves.”

“In the game, you go up the ladder, down the chute. It’s random based on what you roll,” she said. “The moniker represents the precarity surrounding sobriety.”

Because the play explores heavy topics surrounding trauma and mental health, the actors spent hours conducting research in preparation for their roles.

Communication junior Danny Mares, who plays Ortiz, said he spoke with military personnel and watched videos about soldiers with PTSD to prepare for the role.

Mares said he even found the Facebook account and videos of the real-life person his character is based on so he could practice speaking in the same way.

“I got so far behind in my other classes because I spent so much time researching this character,” Mares said. “That’s the beautiful thing about being an actor. You get to learn so much about what it means to be human.”

Along with the cast’s careful preparation, the designers also aimed to “evoke a sense of online-ness” in the chat room scenes by placing LED lights on the floor and projecting graphics on stage.

Dzodzomenyo said the actors wouldn’t look at each other during the chat room scenes to create the sense of isolation that comes from communicating through screens. Although challenging, she said it was a brilliant directorial decision.

“It feels like you’re out on stage all alone,” she said. “Doing those scenes without eye contact mimics the feeling of isolation these characters are feeling.”

Mares said he hopes audience members resonate with the performers’ vulnerability after the show.

For him, the characters survive difficult situations only because of the support of their friends and family around them. He wants people to remember after watching the show that they should be unafraid to reach out for help.

“Chances are they’re going through something difficult themselves and wouldn’t mind having a friend,” Mares said.

— Soldiers and a translator face ghosts, tigers and existential questions in “Bengal Tiger at the Baghdad Zoo”