The Daily Northwestern • May 26, 2022 • https://dailynorthwestern.com/2022/05/26/ae/mudlark-theater-spotlights-youth-experiences-during-covid-19-pandemic/ 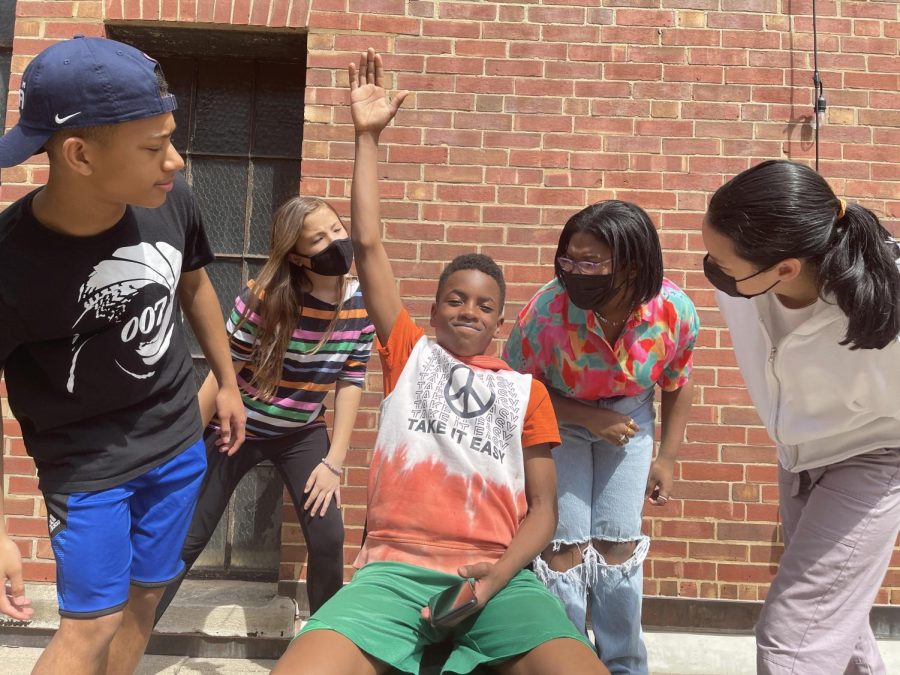 Some of the young actors who star in Mudlark Theater’s “I’m Smiling Beneath This Mask,” premiering this weekend at Ridgeville Park District.

In early April, a group of actors aged 10 to 15 began brainstorming their experiences during the past two years of the COVID-19 pandemic in the form of descriptive paragraphs, personal narratives and poems.

These clips became what is now Mudlark Theater’s production of “I’m Smiling Beneath This Mask,” an original work devised by the young actors. It premieres this weekend on an outdoor stage at Ridgeville Park District.

Spoken word musician and teaching artist Khari B. directed the show. He said the format is ideal for this type of story because the majority of discussion and research on the pandemic’s impact has focused on adults so far.

“The experience of the youth has not been as prominent,” Khari B. said. “I felt like it was important to have that voice magnified and heard by adults.”

Authenticity is a priority when working with students, Khari B. said, as he tries to ensure they have the space to be themselves. As an artist-in-residence at Purdue University, his most recent work has been with college students — which meant this production was an adjustment, he said.

Gabriel Warner-Fong, one of the actors, said he appreciates Khari B.’s fun yet candid directing style. He described one incident after a full run-through of the show where Khari B. told the cast they “sucked.”

“He comes out to us honest,” he said. “He just gave it to us, no sugar-coating.”

Each of the 11 actors has multiple solo moments in the show where they relate their personal experiences through monologues, poems, scenes and music. Warner-Fong said he’s had fun with the material now that he’s memorized all of his lines and directions.

One ensemble piece highlights the struggles of virtual learning, bringing to life a Zoom classroom on stage. The individual scenes, and the show as a whole, contribute to Mudlark’s spring season theme of “finding connection.”

Artistic Director Andrew Biliter said Mudlark’s previous performances at Ridgeville Park District for Shakespeare on the Ridge inspired the outdoor location for “I’m Smiling Beneath This Mask” in the same park.

“I’ve always liked the idea of using that venue,” Biliter said. “Finding a way to do something that felt really immediate and relatable, that anybody walking their dog or walking around the park could see what’s going on and be like, ‘I want to hear more about this,’ and just watch the show. That’s the dream.”

Warner-Fong said performing outdoors has brought unique challenges — including the noise of passing cars and airplanes.

The Evanston community is the target audience for this show, Khari B said. It’s important that adults listen to youth experiences during the pandemic, he said, and this show is a vessel for that understanding.

“These children are their children. And so, (the adults) are getting a sense of the firsthand information from what just happened that they may have actually missed,” Khari B. said. “This is an opportunity for them to hear that, for the good and the bad.”