The Daily Northwestern • May 25, 2022 • https://dailynorthwestern.com/2022/05/25/sports/baseball-northwestern-wins-two-out-of-three-against-minnesota-narrowly-misses-big-ten-tournament/ 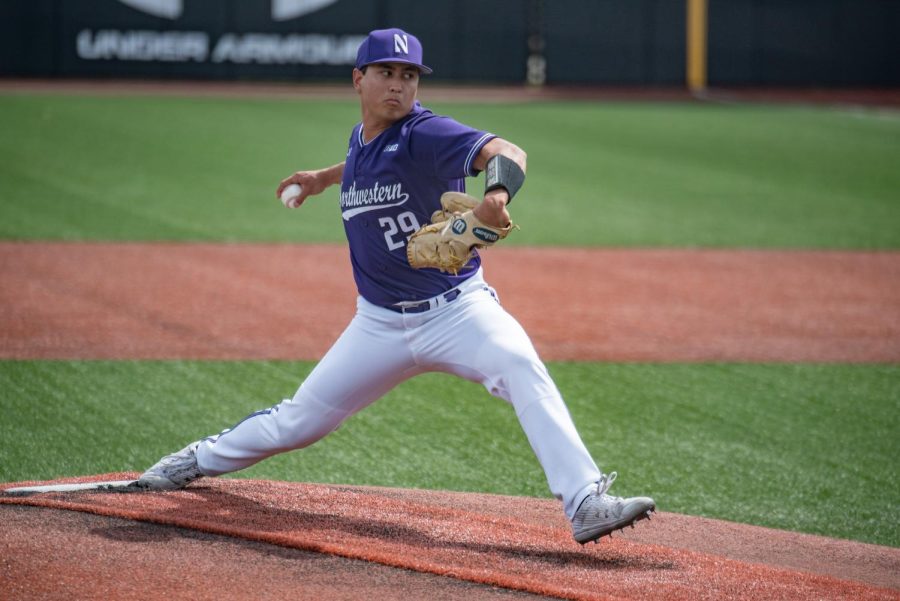 A pitcher throws off the mound. Northwestern won two out of three games at Minnesota but failed to qualify for the Big Ten Tournament.

Capping off a year of dramatic ups and downs — including a discouraging 2-10 start — and a new head coach, Northwestern once again did not have luck on its side this weekend.

After winning two of their last three games of the season, the Wildcats (24-27, 10-14 Big Ten) were in position as the eight seed to qualify for the Big Ten Tournament for the first time since 2017.

But following a Nebraska win, NU found itself in a three-way tie for eighth place and was forced out of playoff contention due to tie-breaker rules.

Despite the disheartening result, the Cats excelled in their last series of the 2022 season.

Playing Minnesota (16-36, 6-18 Big Ten) in a three-game series over the weekend, NU needed to do its best with the playoffs in sight.

The first game, however, did not go the Cats’ way as they lost a rollercoaster of a contest 15-14 last Thursday.

Despite hitting two three-run homers along with a game-tying grand slam by sophomore Jay Beshears in the eighth inning, NU couldn’t contain the likewise dominant Minnesota offense, allowing a run in the bottom of the eighth that sealed the Gophers’ victory.

The Cats rebounded in game two on Friday, with graduate student Michael Farinelli pitching one out shy of a complete game and earning the 11-9 win.

Senior Anthony Calarco started off the scoring with a two-run home run and ended with three hits for the day. The first-baseman led NU this season with a team-high 13 homers and 54 RBIs.

In the season finale, the Cats finished strong with an impressive comeback victory –– a game representative of their resurgence during the season following a disappointing start.

Down 5-0 entering the top of the eighth, NU scored two and six runs in the final two innings, respectively, to conclude the season.

Graduate student Ruben Fontes wrapped up a stellar weekend with a three-hit, three-RBI performance. The outfielder earned Big Ten Co-Player of the Week honors with a .583 average and 10 RBIs in the Minnesota series.

Ending with a 10-14 conference record, the Cats were caught in a three-way tie with Nebraska and Indiana. Due to its superior winning percentage against common opponents, the Hoosiers snuck past the other two squads to make the tournament as the last seed.

Had the Cornhuskers not won their game Saturday and Purdue lost against Maryland — the Big Ten Champions — in a game that was canceled due to inclement weather, NU would have qualified for the tournament.

That’s not to say the season was a disappointment. Following their 2-10 start, the Cats went a solid 22-17 to finish the year.

O’Donnell led the conference in doubles with 24, breaking NU’s single-season record for doubles. Herrera led the team in batting average and on-base percentage in only his first year on the team.

Although the Cats failed to make the Big Ten Tournament yet again, they achieved their second-highest win total over the last 15 seasons.

With a solid core of young talent, NU exceeded expectations in a transition year with an interim head coach and should now have high hopes for the future.

— Price: This is for all the marbles. Northwestern must sweep Minnesota to make the Big Ten Tournament