The Daily Northwestern • May 25, 2022 • https://dailynorthwestern.com/2022/05/25/lateststories/asian-american-studies-program-senior-symposium-spotlights-student-projects/ 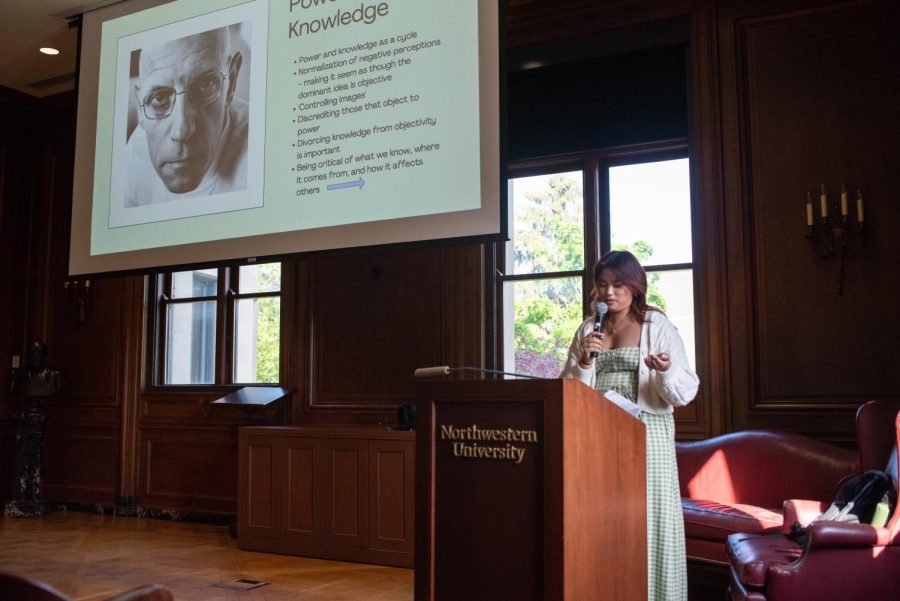 Seniors presented their work and answered questions at the event, held at Harris Hall. The seven projects focused on studying different mediums including poetry, visual art and documentary.

AASP Director and Prof. Patricia Nguyen, who organized the event, said the diversity of student research shows the extensive opportunities for studies in the field.

“The symposium is the culmination of years of work from our Asian American majors, and it really highlights the importance of Asian American studies and the vast range of interdisciplinary types of research that can be done,” Nguyen said.

Nguyen said the senior immersion projects are each 40 to 60 pages long and reflect students’ efforts.

The seniors drew from materials in their AASP classes and personal research for their theses. They expored topics like immigration, intergenerational trauma, anti-fatness, feminism and workforce oppression in the Asian American community.

The graphic novels covered a range of historical events such as the Vietnam War, and personal topics like navigating white spaces as an Asian American. Sumbi said she read the graphic novels at least three times over.

She said graphic novels are not usually considered literature like traditional novels, but the visual books intrigued her because they entwine familial and national histories.

Weinberg senior Isabell Liu’s presentation, “The Weight of Our Liberation,” focused on the liberation of Asian American bodies from white supremacist and anti-fat views about the body.

While they mostly used scholarly sources, they said Twitter proved central to activism against systemic oppression of plus-sized people.

“Twitter is a great source for fat activism and fat liberation theory,” said Liu. “The interesting thing about Twitter is that it’s outside the walls of academia.”

Liu said their goal was for their thesis to serve as care work for their interviewees and for academics.

Nguyen said AASP started because of student protests over the University’s curriculum omitting Asian American experiences. A 23-day hunger strike by the Asian American Advisory Board and other students in February 1995 led to the creation of AASP in 1999.

Nguyen said the projects allow students to address issues that are important to them and further their representation in courses.

“(The symposium) really highlights the way that students engage with the course material and also shows how creative and innovative they are,” said Nguyen. “They’re creating and analyzing their own work and research interests.”

— Amid ongoing push for AASP departmentalization, alum David Kan speaks about 1995 hunger strike for the program