The Daily Northwestern • May 25, 2022 • https://dailynorthwestern.com/2022/05/25/city/mayor-biss-talks-evanston-reparations-public-safety-in-state-of-the-city-address/ 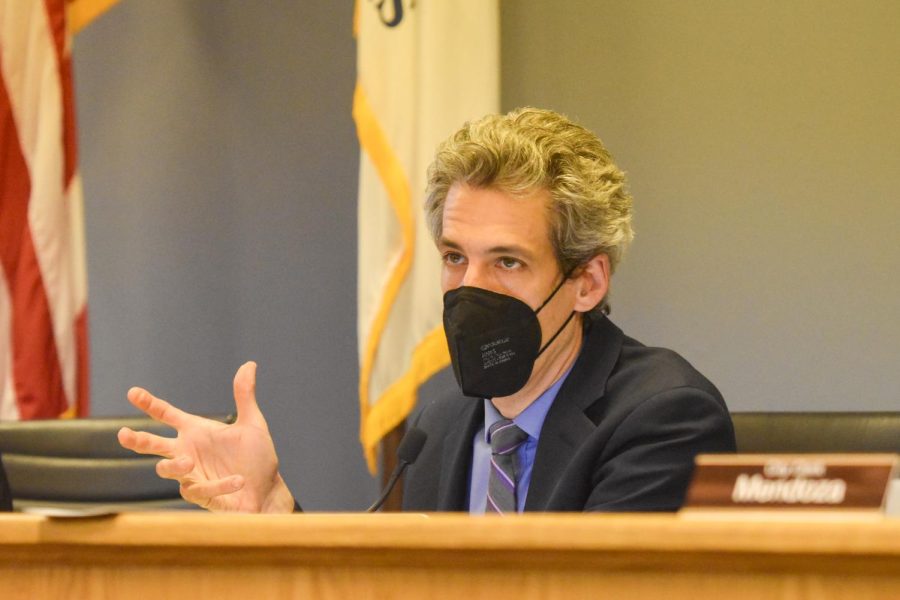 Mayor Daniel Biss reflected on Evanston’s challenges and accomplishments during the past year at his first address at the annual State of the City Luncheon Friday.

Biss took to the podium at Palmhouse amid a tumultuous month for the city. In recent weeks, city officials and residents have discussed fluctuating COVID-19 caseloads, high political turnover and mixed reactions to City Council’s intent to appoint John Fournier as city manager.

As guests filed into the venue on Howard Street Friday morning, about 20 residents protested the city manager selection process outside with signs like “I’m Pissed @ Biss” and “Outraged and Betrayed Again.”

“(Ann Arbor, Michigan) has the exact same problems we have, and (Fournier) has been there for years, and I don’t see that he solved any,” Community Alliance for Better Government member and former 7th ward aldermanic candidate Mary Rosinski said at the protest. “They just came out of a scandal, they just came out of budget problems … it’s time we finally start with a clean slate here.”

The annual in-person event — canceled last year due to COVID-19 — was hosted by the Evanston Chamber of Commerce and sponsored by Rotary International, NorthShore University HealthSystem and Evanston RoundTable. Tickets for the event were $75.

Biss did not address either the protesters outside or the city manager search itself in his nearly 50-minute speech. Early on, he praised the city’s Restorative Housing Program, the first reparations initiative of its kind nationally.

The program recently allocated $25,000 each to 16 residents, which they can spend on home improvement assistance, mortgage assistance or a home purchase. Black residents who lived in Evanston or had parents who lived in the city from 1919 to 1969 qualify.

While Biss acknowledged the program as “a small step,” addressing some critiques of the program’s scope, he said it sets an important precedent.

“It’s a game changer in terms of…what kind of bar we’ve set for other communities that want to truly grapple with their past,” he said.

Criticizing the ideology that “you can’t trust poor people with money,” Biss said the city is on the precipice of launching a program with funding from Northwestern’s Good Neighbor Racial Equity Fund.

“That theory, unfortunately, after a 40-year assault has started to feel radical,” he said.

In his speech, Biss also spoke about an increase in violent crime across the country.

Biss said people have become concerned about their own safety and their community’s climate — leading to resident sentiments that present false dichotomies surrounding public safety.

Biss referenced the Reimagining Public Safety Committee, established in May 2021. Though the committee was originally tasked with offering recommendations for the 2022 city budget regarding the Evanston Police Department, it ultimately did not meet that expectation.

Biss said one critical public safety success is the city’s commitment to the creation of a Living Room Program, a walk-in mental health crisis center.

The mayor ended his speech by addressing the “unspeakable acts of abuse” at the city’s lakefront, referring to the allegations of a culture of sexual misconduct within Evanston’s lakefront staff.

Biss said he is proud to say he felt the city treated the crisis with the seriousness it deserved, bringing in an independent third-party investigation.

He also acknowledged the tremendous amount of turnover in the city — and the high number of interim positions filled by staff.

“I don’t want that frustration and anger to lead into feeling like there’s something wrong with all that,” he said. “That turnover means that there is change coming to the city.”

— The Daily Explains: Political turnover in Evanston has welcomed newcomers at high rates. Here’s what you need to know about our city’s fledgling leaders.