The Daily Northwestern • May 25, 2022 • https://dailynorthwestern.com/2022/05/25/city/eths-stopped-a-native-student-from-walking-at-graduation-family-members-say-it-indicates-a-need-for-schoolwide-change/

ETHS stopped a Native student from walking at graduation. Family members say it indicates a need for schoolwide change. 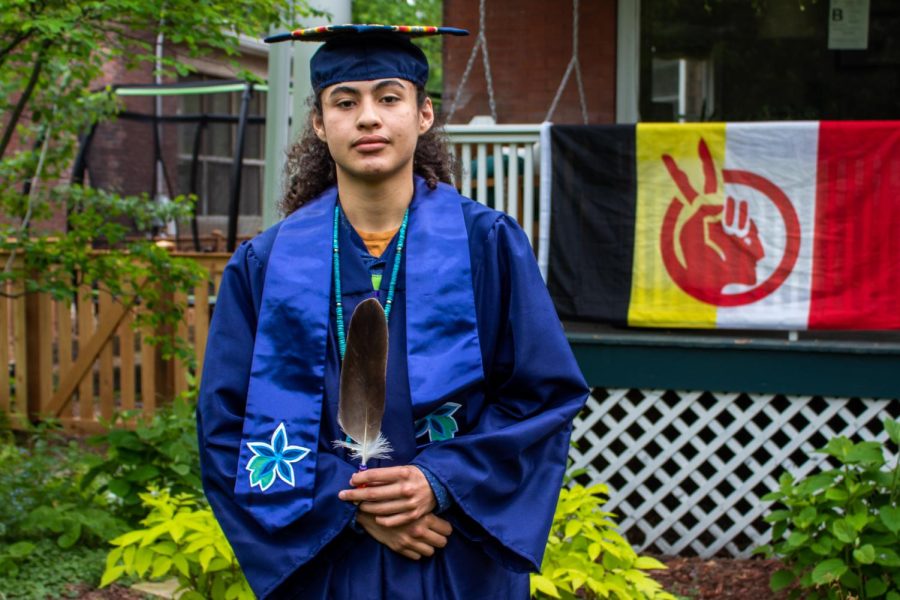 Recent ETHS graduate Nimkii Curley did not walk at graduation this Sunday after he was pulled out of line for adorning his cap and gown with an eagle feather and traditional Ojibwe floral beadwork.

While he stood in line to receive his diploma, an ETHS event coordinator and a security guard pulled him out of line. Each directed him to remove his graduation cap.

Curley, who is Turtle Clan Ojibwe and Black Sheep Salt Clan Navajo, added an eagle feather to his cap, and traditional Ojibwe floral beadwork to his cap and stole. ETHS does not allow students to modify their caps and gowns.

Administrators said Curley would be allowed to walk if he wore an unmarked cap instead. Curley refused. His father Lawrence Curley, who is also Turtle Clan Ojibwe and Black Sheep Salt Clan Navajo, attempted to intervene, but staff were unmoved.

Nimkii Curley stayed in the bleachers with his family for about three quarters of the graduation ceremony, leaving when it became unbearable to watch.

When Nimkii Curley was sent to the bleachers, his parents and siblings were gutted, Bang said, but were extremely proud of him for graduating and taking a stand of integrity and self-expression.“There are lots of people saying it was the rules, you’ve got to follow the rules,” Bang said. “It doesn’t make any sense. And it’s not just for Native people… We have the right to have an eagle feather, period … It’s really important to our identities.”

The eagle feather was particularly important, Bang said, as it’s emblematic of Ojibwe spiritual beliefs and is traditionally gifted to people stepping into a leadership role.

“For us, him graduating and walking and doing what he’s done is an act of leadership,” Bang said. “It’s actually an act of community healing and familial healing.”

Bang said Nimkii Curley’s grandfather is a survivor of the boarding school system, as was his grandmother, who is now deceased.

“Symbolically, Native Americans have been asked to do that — to give up all that they are culturally so that they are able to be accepted in the community,” Lawrence Curley said.

Disallowing Native regalia on the basis of uniformity misunderstands the social justice frameworks ETHS tries to uphold in its curriculum, said McDaid, who is Shoshone-Bannock.

“(The incident) ignores Indigenous tribal sovereignty in a way that they don’t understand what equity really means,” McDaid said. “That is an equality framework, not an equity framework, and certainly not one that upholds sovereignty of Indigenous people and our ability to live in our cultural lifeways in the institution of the school.”

“My kids have been to other schools,” Bang said. “Same stuff, different school.”

An ETHS representative told The Daily ETHS is currently reviewing its graduation guidelines in relation to “acknowledging the history and stories of Indigenous students.”

“While ETHS has consistently shared with seniors that additional apparel or adornment on caps and gowns is not permitted during the graduation ceremony, we are taking the opportunity to examine our past practices,” the representative wrote.

Dozens of members of the Chicago-area Native community came to Evanston to join the family in celebrating Nimkii Curley’s graduation.

To support their brother, Miigis Curley began circulating a petition to raise awareness of the incident.

The petition calls out the disparity between ETHS’s commitment to anti-racism and the school’s actions at graduation. At press time, it had received more than 11,000 signatures.

In an update to the petition Sunday, Miigis Curley said Campbell sent an email saying the school planned to allow future graduates to wear Native regalia on their graduation uniforms.

“I was contemplating ending the petition because we did get word of change at ETHS,” Miigis Curley said. “But I decided to leave it up, mostly because it’s a place for people to share support.”

Bang said the petition seemed to provide an opportunity for many non-Indigenous students to show their support, though some students remained unsupportive.

Nimkii Curley said this level of peer support has surprised him, as it hasn’t existed previously.

In his sociology class during his last quarter at ETHS, Nimkii Curley said he sent out a Google Form survey asking if students were in support of merchandise from the Chicago Blackhawks. The mascot has been widely decried as racist imagery.

Though many students said they would support removal, Blackhawks merchandise is frequently worn at ETHS, Nimkii Curley said.

Bang and Lawrence Curley said ETHS does a lot of general anti-racism work. But as the family moves forward, it’s looking for the district to move beyond apologies and commit to systemically improving the school’s climate for Native students.

The pair met with Campbell two weeks before graduation to discuss broad views of anti-Indigenous practices and Indigenous invisibility at ETHS.

“(Campbell) committed to really including Native people in (the school’s) equity work going forward,” Bang said. “I look forward to being able to make sure that the school follows through on their promises next year.”

Nimkii Curley said he, too, is looking to ensure future Native students have better experiences. Yet, he said being unable to walk during Sunday’s graduation was disappointing on a personal and generational level.

“My (grandparents) went to boarding school. They didn’t get to graduate from high school. My father didn’t get to graduate. And I was up next. I guess it will have to be the next generation in our family before that happens,” Nimkii Curley said. “That ethic of doing things for the next generation is always on my mind. But times like this, I wish that it didn’t have to be.”