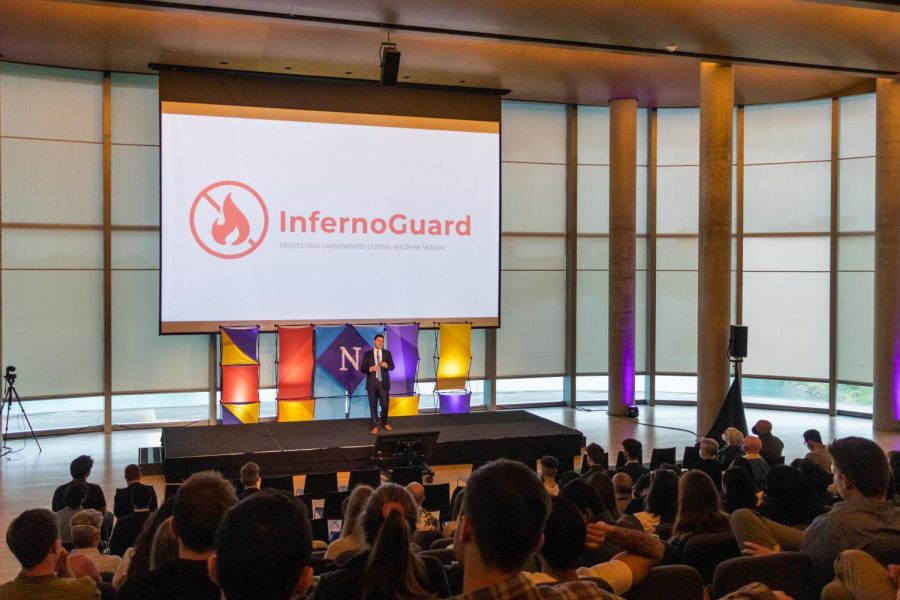 InfernoGuard beat out 24 other startups in this year’s VentureCat competition.

The annual pitching competition allows Northwestern students who are founders and significant equity holders of a startup to win money and gain exposure to help grow their business.

Organized by the Farley Center for Entrepreneurship and Innovation, the Kellogg School of Management, the Donald Pritzker Entrepreneurship Law Center and The Garage, VentureCat has awarded more than $1.5 million in nondilutive funding since 2014.

Larry Levy (Kellogg ’67) endows the Levy Institute for Entrepreneurial Practice, which helps fund the competitions. At the event, he said he hopes to promote entrepreneurship at NU.

“The whole campus is blooming with entrepreneurship,” Levy said. “Congratulations to all of the people who made it this far.”

Judges heard pitches Wednesday from six finalist startups, narrowed down from 25 semifinalists. Each finalist was the winner of one of five VentureCat categories: Business Products and Services, Consumer Products and Services, Energy and Sustainability, Life Sciences and Medical Innovations and Social Impact. One “wildcard startup” was also named a finalist.

This year’s competition started in February with information sessions about the competition. After an application process, judges chose semifinalists on April 19, giving them more than a month to prepare for the final competition. While judges chose the first, second and third place winners, the audience had the opportunity to vote on a startup to win an additional $2,000.

InfernoGuard, which was on the Energy and Sustainability track, beat out 24 other startups. Represented by InfernoGuard CEO and co-Founder and McCormick sophomore Kevin Kaspar, InfernoGuard won over judges in a closed-door pitch session before presenting to a live audience in the public showcase.

According to Kaspar, wildfire detection can often take hours or days, leaving landowners and companies scrambling to save their land.

“Our solution can detect these fires immediately,” Kaspar said. “Our flagship hardware product has been tested and deployed in remote environments and accomplishes three main goals — collect environmental data, analyze the data collected and directly notify both landowners and first responders via text message.”

The second place team, Beni, won for its browser extension in the Consumer Products and Services track. It aims to provide the convenience of traditional online shopping for consumers who want to shop secondhand.

“It’s like Honey meets Expedia or e-commerce,” Beni CEO and co-Founder and design innovation  second-year Sarah Pinner said. “In under a year, we’ve already helped hundreds of shoppers gain access to the world of resale.”

Zuri Fertility won third place and the Audience Favorite award for its virtual fertility clinic that helps diagnose infertility and offers assistance to couples throughout their journey to have a baby.

The company participated in the competition as a wildcard — the only company represented in Wednesday’s showcase that did not win one of the five tracks.

“As an app, Zuri provides concierge fertility services,” Zuri CEO and co-Founder and MD-MBA candidate Giuliana Zaccardelli said. “We advocate for our patients … by getting couples the medical answers that they need.”