The Daily Northwestern • May 23, 2022 • https://dailynorthwestern.com/2022/05/23/sports/softball-no-9-northwestern-trounces-opponents-at-evanston-regional/ 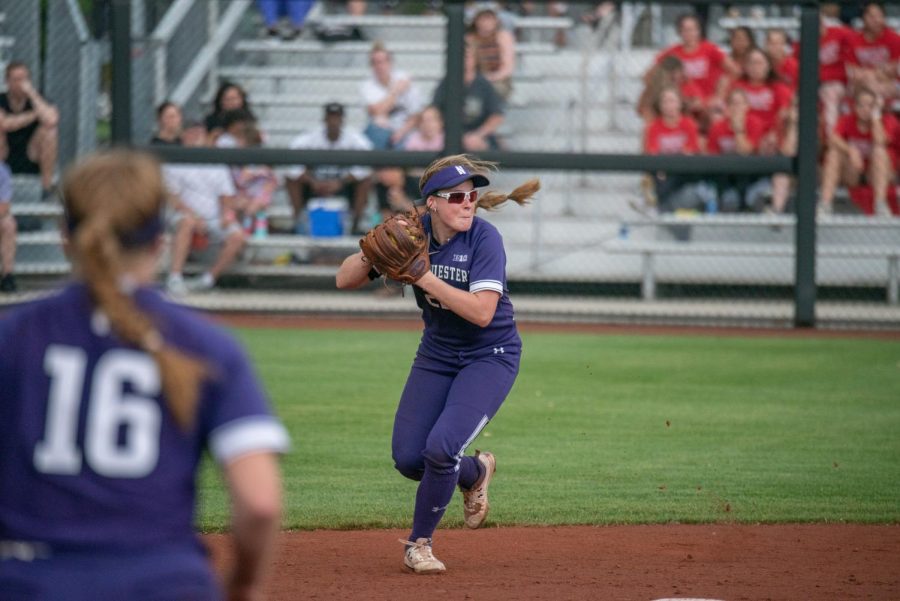 Northwestern welcomed three teams to Sharon J. Drysdale Field starting Friday for the opening weekend of the NCAA Tournament, including a Notre Dame team the Wildcats had previously lost to. As it turned out, NU didn’t even need to face the second-seeded Fighting Irish to win the Evanston Regional.

“We just talked for five straight days about Oakland,” senior shortstop Maeve Nelson said. “To focus in on one thing … that made it easier.”

After senior center fielder Skyler Shellmyer reached third base on the Cats’ first plate appearance, graduate right fielder Rachel Lewis began the scoring with her own three-base hit. Then, senior catcher Jordyn Rudd drove Lewis in on the next at-bat.

The Golden Grizzlies tied the score in the third inning, but a home run from Nelson pulled NU back to front. Freshman second baseman Grace Nieto extended the Cats’ lead in the fourth inning, setting the stage for Nelson to hit her second home run of the day in the fifth — a ball that landed in nearly the same spot.

“(Nelson is) a great player — there’s no other way to put it,” Oakland coach Jenna Modic-Blythers said. “I wish we would have pitched around her a bit better.”

That victory set up Saturday’s game against McNeese (40-21, 15-3 Southland), who defeated Notre Dame the day before.The Cats’ offense had a field day against the Cowgirls, as Rudd singled to left field to bring Shellmyer home in the first inning.

“If you look at numbers, you look at lefty matchups, righty matchups, you get a feel for it, you say ‘Okay, who’s going to be better on this pitch?'” coach Kate Drohan said. “(Supple) cashed in today, she was great.”

McNeese got three runs off an RBI triple in the bottom of the inning to cut the deficit. But the Cats followed it up with a huge scoring outburst in the fourth inning. Rudd, Cady, Supple and Lewis combined to drive home nine runs, forcing the Cowgirls to turn to their fourth pitcher of the game.

The cherry on top came in the fifth, courtesy of freshman pinch-hitter Ayana Lindsey. She cleared the fence in her first ever postseason at-bat, completing a 17-3 rout.

“It almost feels magical, in a way,” Shellmyer said. “It was really fun, knowing that everyone in the lineup can do their thing.

Sunday’s regional final was a rematch with McNeese. The official attendance was 1,120 people, the most since the 2014 Big Ten Tournament.

Senior pitcher Danielle Williams started the game for the third day in a row, working her way out of multiple jams on the day.

The game was nearly as lopsided as the previous one — the Cats once again scored in the first inning, this time off a single from Nelson. Rudd, Cuchran and Supple piled on the pressure in the third frame, each furthering NU’s lead with their at-bats.

“They were able to get traffic on the bases and come up with timely hits throughout the game,” McNeese coach James Landreneau said. “(We) scratched out eight hits, but couldn’t get a timely hit, and you need timely hits to compete against a team this way.”

The Cowgirls replied in the next inning with a one-run single, but Lewis retaliated with a three-run blast over the fence in left field. Despite being the Cats’ all-time home run leader, it was her first career postseason home run. Then, junior left fielder Angela Zedak smacked a ball onto the rooftop of Welsh-Ryan Arena to make it 10-1.

McNeese loaded the bases in the fifth inning but only managed one run, a consolation for the Cowgirls, who had been run-ruled for the second day in a row.

“I get to be in the roof club with one of my inspirations, (Lewis), and Maeve and Olivia (Duehr),” Zedak said. “It’s a pretty great feeling to have.”

NU is 4-0 against Pac-12 Conference opposition this season, including two wins against teams that also won their regional.

“We’ve had a lot of games this year that have been World Series-esque games,” Lewis said. “That prepares us really well going into Super Regionals.”