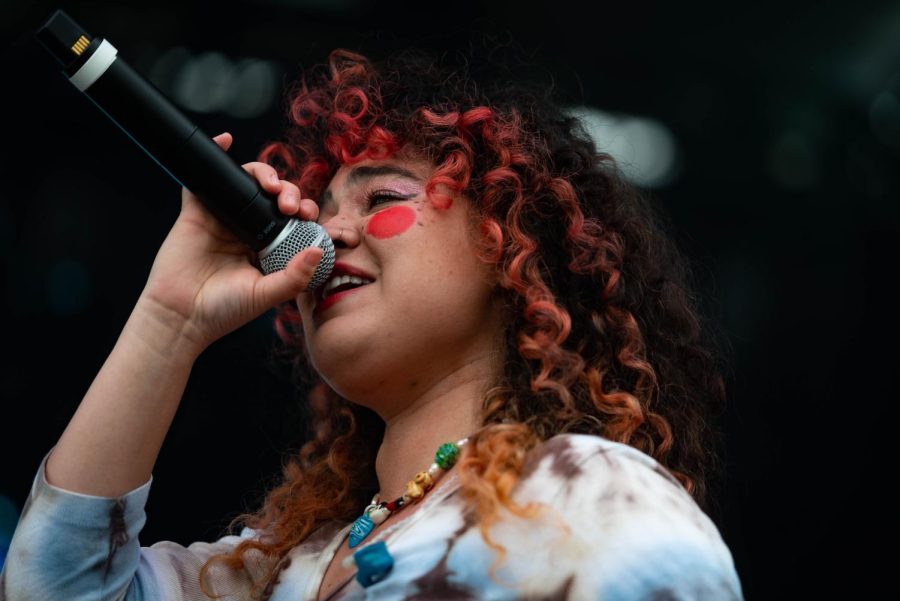 Content warning: this story contains a mention of domestic violence.

Mayfest Productions, along with For Members Only, hosted the event, which is the country’s largest student-run music festival. This year’s event on the Lakefill marked the 50th Dillo Day, with a theme paying homage to the tradition’s Texan origins: “Return of the Rodeo.” Despite the cold and rain, students showed up in cowboy boots, hats and Western apparel to celebrate Dillo Day, which was in-person for the first time since 2019.

Inclement weather earlier in the day caused cancellations and delays. Battle of the Artists winners Poor Man’s Yacht Club, Ciel and Moondog were unable to perform on the Main Stage. However, student artists were still able to perform on the FMO stage, followed by featured performers Jordan Hawkins, Kari Faux, Scorey and Taylor Bennett.

PR director and Medill sophomore Catherine Duncan said Mayfest was determined to give students a quality Dillo Day after two years of being unable to host the festival in person. Duncan said she was proud of how the Mayfest team handled the delays from the weather.

“There were lots of times where we needed volunteers or extra people to help out, and every single member was willing to step up and go out of their predetermined role to help the day go smoothly,” Duncan said.

Duncan said she was thankful for the audiences who showed up for each performance even under the weather conditions, as “there’s no music festival without the audience.”

By the time mainstage opener Vicetone came on stage, Duncan said she was able to finally feel like the day would be a success.

“If people are showing up for this at one in the afternoon and in horrible weather, and they still have such great energy, then I’m hoping the rest of the day will go smoothly,” Duncan said. “And then every single performance after that just kept proving it.”

McCormick fifth-year Kelsey-Ann Leslie arrived at the Main Stage during Cochise’s set and was able to push her way to the front just as Wolf took the stage.

She said Mayfest’s announcement motivated her to listen to Wolf for the first time, and she said she was thankful the festival helped her find a new artist she loves.

“My freshman year (Dillo) was probably one of the highlights of my Northwestern career,” Leslie said. “Out of all of the Dillos I’ve been to, I think the amount of great artists they were able to get this year, they really outdid themselves.”

Hailing from Jamaica, Leslie brought the country’s flag with her for Sean Kingston’s set, which the artist grabbed and waved on stage. Kingston, a Florida native, moved to Jamaica when he was six years old.

Leslie said she appreciated how many people shared her love of the Jamaican artist. She planned to stay at the barricade for the rest of the night through both Tinashe’s and Dominic Fike’s sets.

“It always makes me happy when I see how much people love Jamaican artists,” Leslie said. “Of course I love them because that’s my culture, and I tend to forget that other people love them.”

Nighttime headliner Dominic Fike ended the night with an hour-long set featuring electric guitar riffs and a surprise appearance from Wolf for the day’s second rendition of “Photo ID.”

While on stage, Fike made comments about Amber Heard, whose ongoing defamation suit with ex-husband Johnny Depp has gained traction on social media. The comments prompted boos from the crowd, and students shared their thoughts on Twitter later that night.

“i wasnt really looking forward to dominic fike anyhow but hearing him say ‘i think amber heard is hot, i want her to hit me’ turned me tf off. that’s disgusting no matter how you view the trial and a weird thing to say about a potential abuser/victim,” Medill freshman Fatima Jalloh said in a tweet Saturday.

i wasnt really looking forward to dominic fike anyhow but hearing him say ‘i think amber heard is hot, i want her to hit me’ turned me tf off. that’s disgusting no matter how you view the trial and a weird thing to say about a potential abuser/victim

Medill sophomore Mikayla Denault made a sign Friday night that read, “Sean Kingston, please call me a beautiful girl,” referencing Kingston’s 2007 song, “Beautiful Girls.” The singer then reposted Denault’s photo on both his Instagram and Twitter, which Denault said was everything she could’ve hoped for.

Denault’s favorite moment was when Remi Wolf came out to sing “Photo ID” with Dominic Fike, which she saw from the front row. Beyond any individual song, though, Denault said she was happy to see her community experience collective joy.

“Everyone being together in the same location was one of my favorite parts,” Denault said. “We all just got to kind of be one big community.”

— Dillo Day preview: What to know about the artists before you go

— The history of Dillo Day: How the 50-year-long tradition came about